Stage 2: Setting up a campaign and sub-campaign

Now Harry will configure his campaign in Engage. To make it easy for him, we’ll break his work down into four tasks with sub-tasks:

Scenario: Harry has a spreadsheet containing the names of 1,500 customers that will be contacted. He’s busy and doesn’t have the time to add each customer manually into Engage.

Solution: Rather than enter each contact’s information directly into Engage, Harry can import the spreadsheet that contains the contact information of each customer. He'll do this in two steps:

First, he'll need to prepare the data for import so that it maps correctly in to the appropriate list fields in Engage. 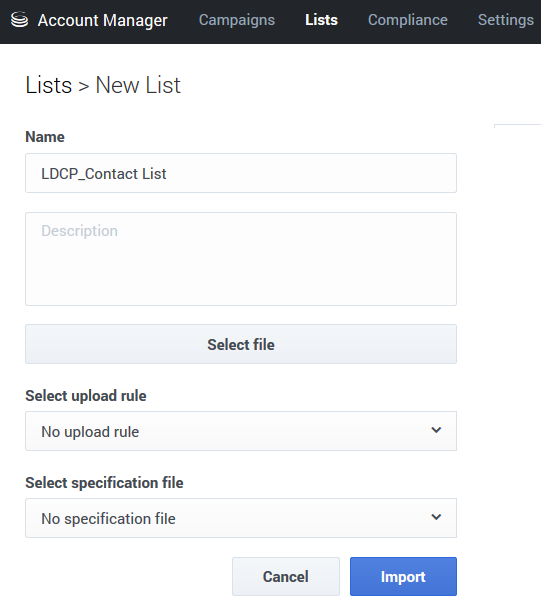 Scenario: After Harry imported his spreadsheet, his account representative from G-Tel called with the contact information of seven customers they wanted added to the campaign. Harry confirmed that these customers were not listed on the spreadsheet he just finished importing.

Now that Harry has imported the contact list and added his additional seven contacts, he can edit, delete, export, filter, download, or generate a report of the list or edit or delete individual contacts. He can also split his list into smaller lists using the Apply list rules function, and he can import specification files and perform a contact search. He’s happy with the list and moves on.

Now it’s time for Harry to select the people he’ll exclude from the campaign. When he clicks on the Compliance tab on the Campaigns page, he'll have two options: Compliance Tools and Contact Suppression Lists.

Scenario: Harry has also been told that Ohio is under a state of emergency as a result of widespread damage from a tornado. He wants to remove all Ohio customers from the calling list.

Solution: Harry can use the Do Not Contact Location rule to stop the system from calling Ohio. 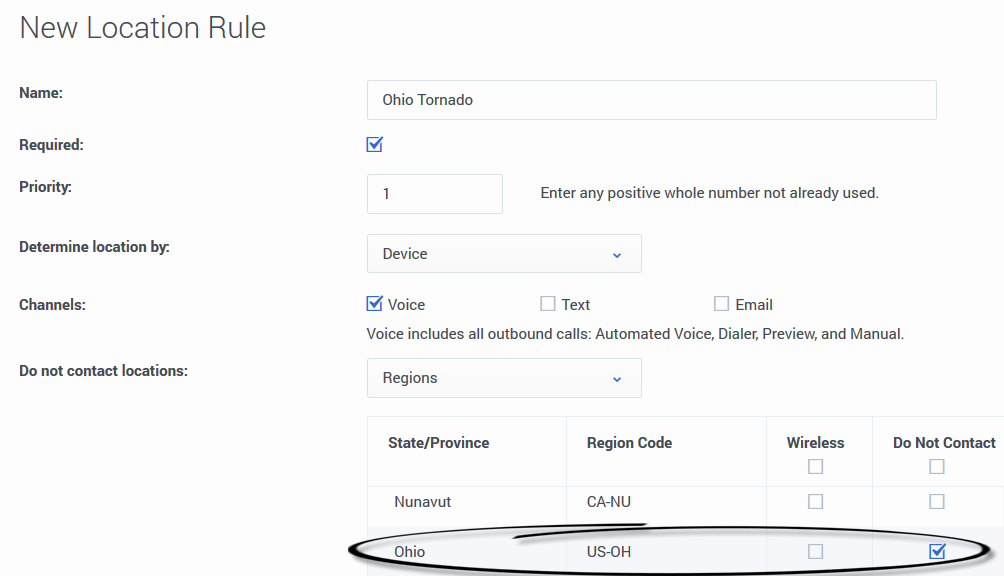 Scenario: Harry has a spreadsheet containing the names of 50 people who have requested to be removed from all future calling campaigns.

Solution: Harry will use the Contact Suppression Lists function to exclude those 50 people from the campaign. He'll do this in two steps: 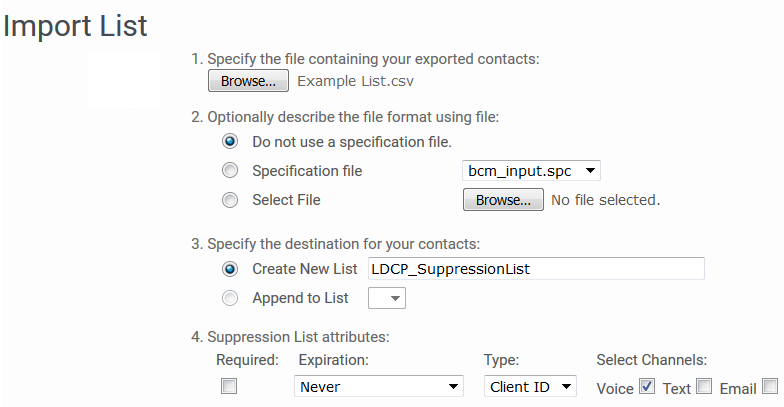 If he wants to, Harry can now select from the following suppression list options: edit, delete, export a list, or add, edit or delete individual contacts. He’ll leave it alone for now.

Scenario: Because this is a sales campaign, Harry must abide by the FCC rule that says the contact center must connect a call to an agent within 2 seconds of detecting a voice.

Solution: In order to meet the 2-second connect standard, Harry will run his campaign in ASM mode, often referred to as Fast Bridging. And because Harry has only two weeks to reach 1,500 customers, with 25 agents assigned to the campaign, he chooses the fastest dialing mode, Predictive.

The starting point is the Campaigns page in Account Manager. He’ll set up a new campaign and create and run a new sub-campaign.

Select New-->Campaign from the top of the Campaigns page, he’ll provide basic details about his campaign.

Now, in the Outbound tab, he’ll specify Default Single Pass as his strategy name and he'll use the following settings for his Predictive dialing campaign:

In this section Harry will only need to add the contact suppression list he uploaded earlier. The compliance rules he defined in Enterprise Manager should appear in this section.

Escalation Type: Select None because escalation is not required in this campaign. Execution Order: Sequential, meaning that supplemental passes to a contact will not be executed until at least one attempt on every contact in a list has been made in a previous pass.

In the Pattern Options section, Harry will select Dialer Pass and then ensure the settings are as follows:

If Harry later added a second dialer pass, he would configure the added options as follows:

Remember, enabling Predictive Pacing and Fast Bridging is the only way to meet the 2-second connect rule set by FCC regulations.

Scenario: The Caller ID number that will display on a contact's phone is currently defaulted to the phone number associated with Harry's account, but Harry wants to specify a different phone number.

Once Harry creates the Caller ID Number, he can change it (by using the Reassign function), edit the name of description fields, or delete the number.

Scenario: Harry is now ready to create and send his sub-campaign. He doesn't have time to go through and specify the same options he specified when he configured the campaign.

Solution: Harry can apply his campaign settings to his sub-campaign.

On the Campaigns page, under Actions, he’ll select New Outbound from the Sub-campaign section of the drop-down menu. Then he’ll specify the sub-campaign information as follows: