Businesses sometimes cannot offer on-demand, low-wait agent help because of resource limitations or increased service usage. In these situations, the best option is to offer some form of deferred service that can connect consumers and agents later, at a mutually-beneficial time.

Genesys Callback, which takes its name from the most typical form of deferred agent voice connection, also provides support for a user-originated call-in feature, in addition to a range of scenario and sourcing options. In short, Genesys Callback is much more than callback functionality. Consider the name to be shorthand for the rich set of scenarios that are described in this Callback documentation.

What is a Callback?

A Callback is a data record that contains data for calling a customer at some time in the future. Callbacks generally consist of attached data and configuration data. Attached data is specific to the end customer and might be used in screen pops, routing, reporting, and other applications. Configuration data describes how a callback is fulfilled; this includes target expressions, timeout values, and virtual queue names.

Using Callback, you can associate a callback service with a phone number, which enables a caller to request a callback. Depending on which scenario you choose to implement, the callback is then routed to an agent who processes the call.

For information about the supported scenarios for Genesys Callback, see Callback Scenarios.

For information about real-time reporting for callbacks, see Real-Time Reporting with Pulse in the Reporting in the cloud documentation. Callback activity is tracked as part of the Queue reports. You can add a report widget that is based on the Callback Activity template to your Pulse dashboard.

About the Callback Application 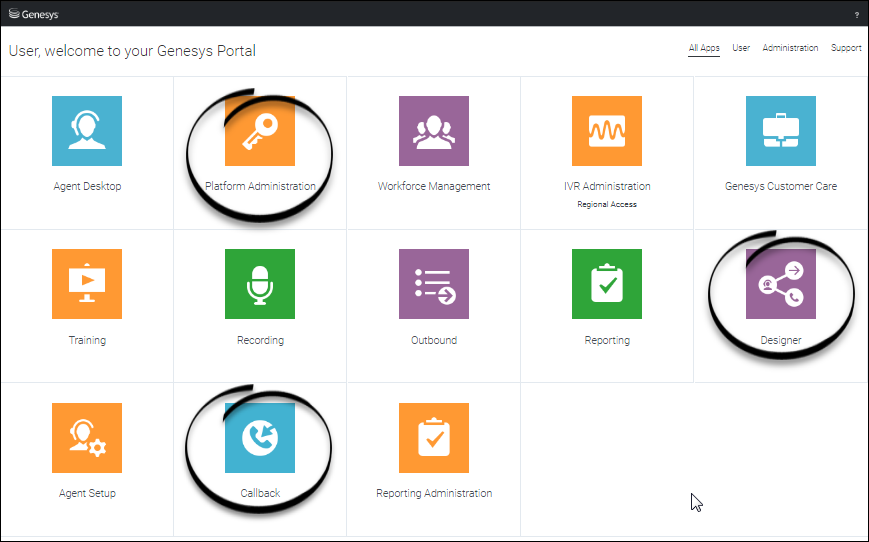 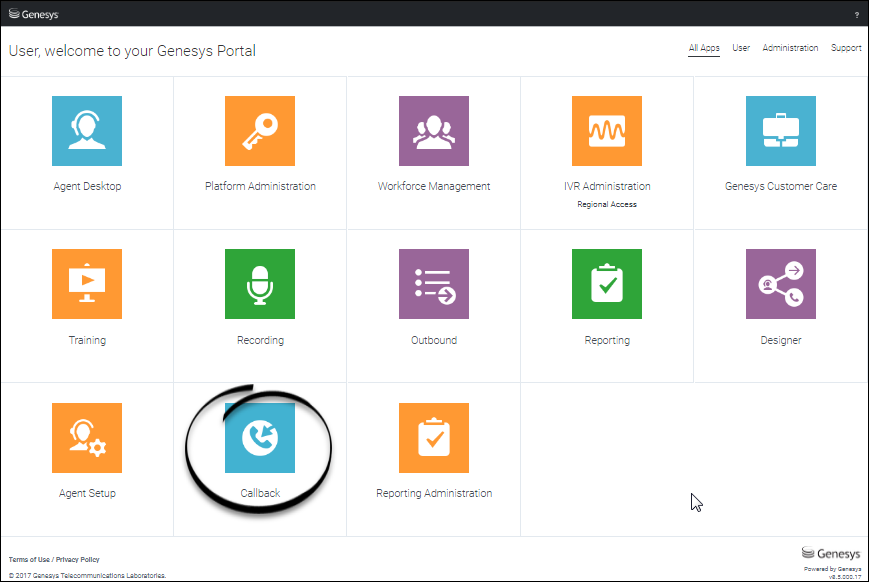 Click the Callback icon on the Genesys Portal to open the application.

In the Callback application, tabs, dialogs, and panels display based on your role permissions. If you cannot view a feature, use the Platform Administration application to check your access group.

The Callback application has multiple tabs. You might see all available tabs or only some of the tabs in your Callback UI. Administrators will make sure that you have access to the tab or tabs that you need to do your job. Access is based on the role(s) to which you have been assigned.

The following tabs are available in the Callback UI:

Getting Started with Genesys Callback

The Callback application is supported in the following browsers:

CX Contact Solutions OverviewCallback Scenarios
This page was last edited on November 9, 2020, at 08:56.