Use the Entry block to:

All workflow and callflow diagrams must start with an Entry block, which cannot have any incoming connections. There are different Entry blocks for routing workflows and voice callflows. The Entry block is used as the entry point for a main workflow or subworkflow (subroutine). Composer throws a validation message if the Entry block is missing or more than one is added.

The Entry block global variables define the State for the application and are maintained as the <datamodel> in the SCXML engine. The Back End block provides a Pass State property to pass state information to the Server side.

An Entry block user-defined variable can be used to access the results of a Stored Procedure call specified in a DB Data block for both voice and routing applications. Note: Outlinks starting from the Entry block cannot be renamed or assigned a name through the Properties view.

The Entry block has the following properties:

Use this property to define which exceptions or events to handle at the Entry block. This block contributes a state in the generated SCXML code that is a parent state for all blocks in a Workflow. This allows an event received for any of the workflow blocks to be handled at the Entry block. 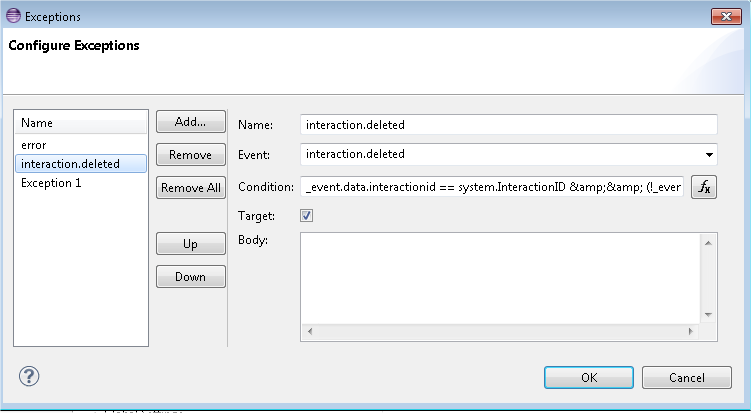 Starting with 8.1.410.14, a resultof guard condition check is now made when processing eServices/child interactions. The Entry block interaction.deleted event handlers are updated with the following guard conditions:

You can also find general information on the Exceptions property under Common Properties.

The Entry block lists all the variables associated with the workflow. Composer supports the following types of variables for workflow diagrams in the Entry block:

Important! When defining a variable name, the name:

Variable Name You can use the Variable name field for either of the following purposes:

Excluded Characters The Variable name field will not accept the following special characters:

The variable Value field will not accept the following special characters:

Starting with 8.1.4, Composer blocks used to build routing applications (with the exception of the Disconnect and EndParallel blocks) add a new ORS Extensions property.

Starting with Composer 8.1.450.33, when you rename a variable in the Entry block's Application Variables dialog and click OK, a new refactoring dialog is displayed as follows:

The refactoring dialog displays the other impacted instances of the variable you are renaming. Previously, when a variable was refactored, Composer displayed validation error messages to notify users to change the variable name in other impacted blocks, only when the particular diagram was validated. This new feature allows users to select variables to be refactored in the different impacted blocks of a diagram when they rename any variable in the Entry block.

Important
If you do not want to refactor the any of the listed instances through the dialog, click Cancel and then click OK on the confirmation dialog to update the variables manually.
Important
Refactoring does not automatically save the diagram file. The diagram file must be saved manually.

Note: For variables that you do not select from the refactoring dialog, Composer generates validation error messages (after diagram validation) to notify users to manually change those variables' names in the impacted blocks.

The following objects are not considered while refactoring:

Important
This feature is enabled by default. To turn it off, deselect the Enable Variable Refactoring option under Preferences > Composer Diagram.
This page was last edited on November 30, 2018, at 18:46.
Comments or questions about this documentation? Contact us for support!