Other guides
/ Routing to the Last Called Agent
8.1.5
Jump to: navigation, search

Routing to the Last Called Agent

Beginning with release 8.1.510.12, Composer supports routing interactions to the Last Called Agent (LCA), that is, the most recently contacted agent. This is supported for both voice and non-voice multimedia interactions through the Target block and the Route Interaction block respectively.

When a customer calls a contact center, the agent ID and call time are saved to the customer contact information in the UCS database. As a result, a future call from the customer can be routed to the same agent.

Important
The LastCalledAgent_EmployeeID and LCA_EmplID_voice customer profile attributes are persisted in the UCS database only if the Interaction Workspace option contact.last-called-agent.<mediatype>.enable is set to TRUE as described here and is applicable only for inbound and outbound calls, and not for internal calls.

To enable this functionality in Composer, a new target type, LCA, is added to the Targets dialog accessed through the Targets property in the Target block and the Route Interaction block. 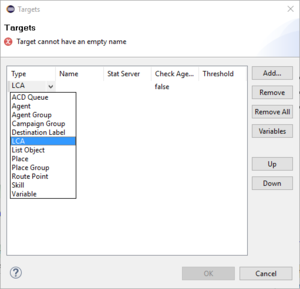 Important
The other options in the Targets dialog (Stat Server, Check Agent Availability, and Threshold) are not applicable for the LCA target type. 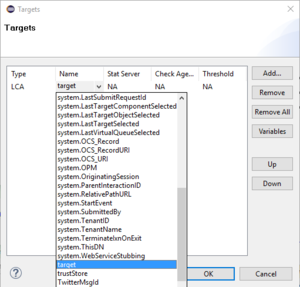 Important
When LCA is selected as the target type, a script is generated within the target state as part of code generation to retrieve the last called agent's ID from UCS and is used as the routing target. If the last called agent is not available, the other targets specified in the block are attempted.
This page was last edited on April 2, 2020, at 08:44.
blog comments powered by Disqus