Below is a video tutorial on debugging VoiceXML applications.

Important
While the interface for Composer in this video is from release 8.0.1, the steps are the basically the same for subsequent releases. 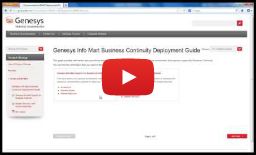 Integration with a SIP Phone is provided with a click-to dial feature for making the test calls. You can debug:

You can start a debugging session in the following ways:

All of the above is also available in the Run top-level menu.

If using Context Services, you must do the following before debugging a callflow or a VXML application:

The figure below shows Composer's elements for the GVP Debugging perspective (callflow debugging):

Note: The VXML Properties and Configuration views are for information only; they do not perform any tasks.

The GVP Debugger allows you to debug a callflow by single-stepping through the blocks. Prior to debugging, you should have validated the callflow, generated the code, and deployed the Project for testing. Also, if you have not already done so, set GVP Debugger preferences. Select Window > Preferences > Composer > Debugging > GVP  Debugger and configure the GVP Debugger.

Once the call is initiated you will see a red box around the first block of the application. This indicates the current location where the call is paused. Note: The GVP Debugger skips over deactivated blocks.

Application state and last user input values can be seen in the Variables tab.

The GVP debugger creates a debugging-results folder in the Project Explorer.  There is currently no automatic cleanup so the number of files can become large.   Clean up the debugging results by deleting the gvp-debug.<timestamp> folders from the Project Explorer.   Each gvp-debug.<timestamp> folder corresponds to a single debug call that was made at the time specified by the timestamp.  It contains files downloaded by the debugger.  The metrics.log file contains the Call Trace of the call.

When using the Run Callflow or Debug Callflow functions, Composer automatically generates the VXML files from the diagram file that you want to run. In the case of a Java Composer Project that has multiple callflows, Composer attempts to generate the VXML for all the callflows before running (because the application might move between multiple callflows for subdialogs). However, if one of the callflows has an error, Composer provides the option to continue running the application anyway, because the erroneous callflow may be a callflow that’s not used by the one being run (if there are two or more main callflows, for example). When this happens, the VXML files are basically out of sync with the diagram files and this may affect execution.  Genesys recommends that you fix all errors before running the application.

There are various ways to start a debug session. The next section describes Run Mode and Run Launch Configurations.

In order to test and debug applications configured in the Genesys Administrator Console as an IVR Profile, you will have to create a launch configuration for making test calls.

To toggle breakpoints, double-click the side area of the Editor window as shown in the figure below:

This section covers server-side debugging with the TCP/IP monitor. Composer includes a TCP/IP monitor which can be used to debug server-side code such as Server Side blocks and Database blocks. To monitor TCP traffic on the Tomcat or IIS port, follow these steps:

The instructions below describe how to (optionally):

For additional information, see the Genesys 8.1 Security Deployment Guide. Note:  MCP version 8.1.401.07 or later is required to use the TLS feature for debugging.

1. Import the certificate for MCP as follows:

The GVP Debugger has the following limitations:

A partial workaround is to set the Transfer Method property to bridge (i.e.. Transfer Type = blind/consultation, Method = bridge) before debugging. The transfer will proceed, but the debugging session and the call will terminate immediately afterwards. Genesys recommends that you do full testing for Transfer applications by provisioning the application in Genesys Administrator and making test calls directly from the SIP phone. These limitations apply to Run Callflow (in Run mode) as well.