The Genesys Framework component that stores and manages Configuration Database data, which users access through Configuration Manager and Genesys Administrator. Configuration Server prevents entry of logically incorrect configuration data, enables user-privilege-based control of access to data, and notifies client applications dynamically about changes that are made to the data.

Configuration Server stores user credentials and provides authorization to those applications requesting these credentials. The Genesys Administrator Extension logs into other dependent web services by forwarding the same credentials to Interaction Recording Web Services (or Web Services if you're using version 8.5.210.02 or earlier). These credentials are required only once.

Roles and privileges use the following basic concept: 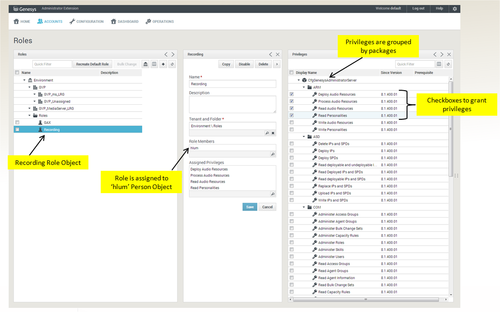 The user must have the following roles, privileges and permissions:

The Recording Plug-in for GAX includes a Solution Definition (SPD) file that can be used to configure roles and access groups.

The agent hierarchy shows how the agents are organized in the hierarchy, and the hierarchy is represented as a field (agent_hierarchy option) in the recording section of the Annex tab in each Person (Agent Name) object.

The following example shows the agent hierarchy with four agents:

Agent1 and Agent2 are on John's team. John reports to Anthony.

To represent this structure, the following fields are stored in each of the Person object:

Partitions are arbitrary names that allows a contact center to partition recordings based on business rules. For example, partitions can be business groups such as sales, support, marketing, etc. To set one or more partitions to a recording, attach data to the call with the GRECORD_PARTITIONS key with a comma-separated list of partition names.

For example, if the GRECORD_PARTITIONS key is set to /sales,/support, the recording belongs to the /sales partition as well as the /support partition.