In release 8.5, the Frontline Advisor (FA) hierarchy is monitored in real time, with structural changes being reflected almost immediately in the dashboards rather than requiring a 24-hour reload cycle or a manual hierarchy reload.

An administrator specifies how often state and performance metrics roll up to the hierarchy pane in the FA manager dashboard; this is the rollup cycle. The Frontline Advisor service generates metrics values at the beginning of each rollup cycle. There are two types of metrics:

See FA Administration Overview for information about the FA page in the administration module and how to use it to configure your FA dashboard, which includes specifying the rollup intervals on the Settings tab. 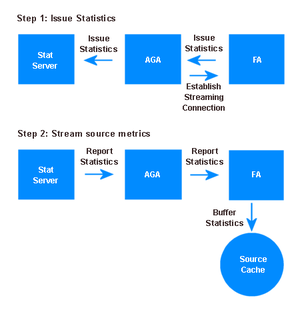 When an FA instance initially requests to register with an adapter, the request includes the host and port on which FA is listening for inbound connections. For information about viewing or editing the port number post-installation, see FA Message Listening Port.

Frontline Advisor performs metric rollups in memory. All report metrics that the aggregation engine must compute include additional configuration to tell the engine how to compute each metric (what formula, if any, to use) and the order (priority, or rank) in which to compute each metric relative to other contributing metrics.

Hierarchies and the Caches

The monitoring hierarchy is loaded from the Genesys Configuration Server at startup based on the configured top-level node. After this initial load, changes to the hierarchy in Configuration Server take effect immediately and are reflected in the FA dashboards at the end of each rollup cycle. You need no longer wait for the overnight refresh, nor force a hierarchy reload. For exceptions, see Aggregation Engine and Restrictions and Limitations.

Additionally, the configuration of default thresholds and overrides is stored in the database. FA caches this constraint configuration, including all constraint overrides. The constraint cache loads from the database at startup. You can change constraints using the FA page in the administration module after startup. At the beginning of each rollup cycle, an immutable copy is made and provided to the aggregation engine.

Tip
The Agent Skills metric is a state metric that has no corresponding source metric. When the dashboard requests a value for the Agent Skills metric, the FA server queries the hierarchy in Configuration Server for the skills list, rather than examining a cache generated from rollups.

The FA aggregation engine runs within the FA service process. The aggregation engine executes formulas using the static rollup hierarchy. This means, of course, that hierarchy events received immediately after the current cycle begins will not be visible on the dashboard until the next cycle completes.

When the FA dashboard requests updated metrics values, it requests metrics for all nodes currently visible (the set of expanded nodes in the hierarchy pane, as well as the agents for the currently selected team). The FA server responds with metric values for the nodes, and uses the same nested structure. However, you or another administrator might add nodes to or remove nodes from the hierarchy between requests. The dashboard accounts for structural changes between requests as follows:

Dynamic hierarchy updates do not include the following events: