Other guides
How It Works / Customized Knowledge Worker States
8.0.3
Jump to: navigation, search

UC Connector allows you to customize the states available to knowledge workers in the UC Connector web client drop-down menu. The "agent states" and the corresponding text displayed in the menu can be customized by editing application resources. This custom state functionality is only supported in the standalone deployment mode. See standalone mode. If UC Connector is connected to an external presences source, such as Microsoft Lync, the presence updates from Lync will override the state set in T-Server.

Before release 8.0.300, UC Connector included two fixed states that mapped to the Genesys states Agent Not Ready and Ready (without an agent mode or reason code):

In release 8.0.300, the UC Connector application is installed with these two states as an example in the XML resource file. The states are also built in the application to enable default handling when the resources are corrupted.

The editable XML resource file contains the state definitions and their corresponding visual representation in the UC Connector web client menu, such as text strings, icons, and translations. The provided example XML can be edited by the system administrator or integrator as required.

The XML file can be provided on the local file system or through HTTP(s) service. The HTTP(s) service can be convenient for managing multiple instances of UC Connector for redundancy or load sharing. The instance of Jetty web server packed with UC Connector can also be used to service this file and its related resources, such as localization files, icons, and graphics. See Knowledge Worker in Customing UCC Connector for details on the setup procedures.

Each Genesys agent state in the XML file is composed of a unique combination of the following:

The agent mode and the reason code are optional.

To make custom state recognizable in the UC Connector web client, you must provide distinct relevant icons. The system integrator is responsible for providing the corresponding artwork. 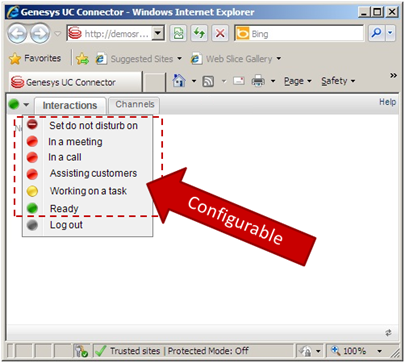 The text representation of the custom state can be defined in several languages simultaneously. UC Connector transmits localized resources to the user's browser to be selected based on local preferences.

When T-Server reports the agent state event, UC Connector matches the event against a set of defined agent states. When the reported state is matched, UC Connector updates the corresponding status indicators in the main panel and Channels tab of the UC Connector web client.

To display a non-matching agent state, UC Connector uses one of the predefined states that have no matching elements defined. For example, UC Connector receives an event with the following:

UC Connector uses built-in plain Ready, Not Ready (previously called "DND on" and "DND off"), and DND state definitions for states that cannot be matched against the XML file.

The system integrator is responsible for defining all the states that must be represented in the UC Connector web client.

Warning
Some states, such as Not Ready with a work mode Legal Guard, cannot be requested because they are controlled exclusively by T-Server or the PBX. Other states, such as Not Ready with a work mode After Call Work, might not be compatible with a particular T-Server or PBX. UC Connector does not validate the state definition. If the state is defined as an available web client menu item, UC Connector attempts to use it as defined, but the operation may fail if the target state is not supported by the T-Server. The states that are controlled by T-Server and cannot be executed as an agent command can still be defined in the XML document so that the corresponding status can be displayed visually.

Users may have multiple channels provisioned in their place, but the UC Connector web client only has one combined agent state indicator.

Warning
The indicator for an individual channel reflects the state of the channel only if the icon for the badge is supplied.
This page was last edited on June 27, 2016, at 22:20.
blog comments powered by Disqus