A call-party is the relationship between a call and a given telephony device. Call-Party is often referred to as party. For the purposes of this section, the two terms are interchangeable.

A call is typically an interaction between two or more telephony objects (or between a telephony object and a network entity) that is established by the use of telephony network capabilities. However, in fact, Genesys assumes this association may have zero to many parties. In the context of the Genesys model, a call is a stateless object, and it always has a unique connection ID.

A party (call-party) represents the call's relationship to a given telephony device—either an internal DN or an external (out-of-PBX) call participant. Each call-party has state (and a number of other attributes).

A call-party state is a packaging of the fuller expression of a party's status (which may be multifaceted)—a compound state made up of the following groups:

Important
Although not all combinations of elementary states make sense, there is no restriction on them.

A state is packed into one integer according to the structure shown below:

The Genesys Framework assumes a particular call-party state for each call-party in the enterprise and supports the generic party-state set common to those T-Servers that support it. Not all party states or party-state transitions are mandatory for each T-Server. A given vendor-specific CTI may not provide a specific call-party state. Or, if a given state is available with the CTI, it may lack some relevant information required for T-Server to represent that particular state on the Genesys side of the software, or permit Genesys to perform a party-state transition. Thus the implementation of call-party states in T-Server is only complete to the extent that information is available from the switch. See PartyState in your API reference for details and state numeric values.

The Generic Telephony State part of a call-party state comprises the most important of the sub-party states.

Important
Previously, the Genesys model did not include the states Initiated and Failed as marking participation in a call. As a result, there were no special events in DN-based event reporting to indicate a transition between those states and NULL. Some T-Servers used device-related EventOffHook/OnHook with at tribute ConnID to indicate a party had been added or deleted, but this event is optional and cannot be used when there is another active call on the same device (otherwise the status of the device is reported incorrectly). It is not possible to reconstruct the Initiated and Failed states from DN-based reporting. Furthermore, for compatibility reasons, parties in these states are not included in the EventPartyInfo list, and related calls are not included in EventRegistered and EventAddressInfo.

The Generic Telephony State has the following possible properties:

Null and Null2—Represent intermediate states when party information exists in T-Server memory, but when there is no logical relation between a call and device.

Initiated—Indicates that a call has been initiated by a device. Any telephony device that is initiating a new call enters the Initiated state while it awaits the availability of switch resources or user input. That is, the device remains in the Initiated state from the moment it goes off-hook until EventDialing is sent.

Connected—Indicates that a given device has a voice connection with other participants.

Important
The Dialing state (which is implicitly used in the DN call model) does not exist in the unified party-state model. Dialing was an attempt to report the state of the other party on the call. Such other parties cease to be clear in complex scenarios where transfers and conferences confuse matters. However, Dialing, as a state modifier, is available for compatibility with traditional reporting.

Call Progress (CP) Detection—The originating device (either a queue or a route point) for predictive dialing is put in this state from the time a call is made (and EventDialing is sent) to the moment the call is classified, at which time it is either moved to the Queued state, or is released.

Held—A device has temporarily suspended its connection to other call participants.

Busy—A call cannot reach the intended device, which is busy.

Failed—Indicates that a call originating on a given device has not succeeded (either the dialed number is wrong, or the switch was not able to allocate the trunk). This state is used instead of Busy when a destination party was never created for the call. Failed also applies to a party whose call has been disconnected, but who remains off hook.

Important
Although they appear in the Generic Telephony State for Regular DNs diagram, events Alerting, Initiated, Failed, and Cleared do not currently exist. These names are reserved for future use. 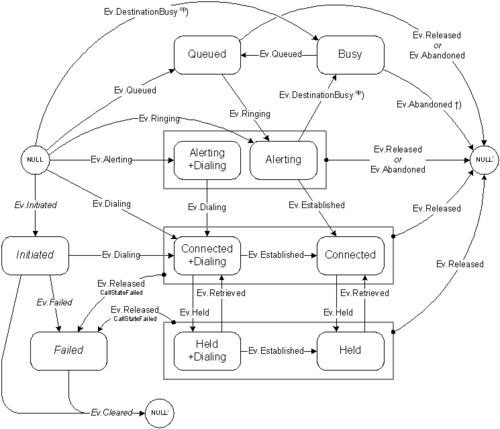 op Note that in this case, with a DN-based call model, EventDestinationBusy is reported for the opposite party.

† EventAbandoned is only sent if there is an EventRinging for that party. This occurs only with external parties. 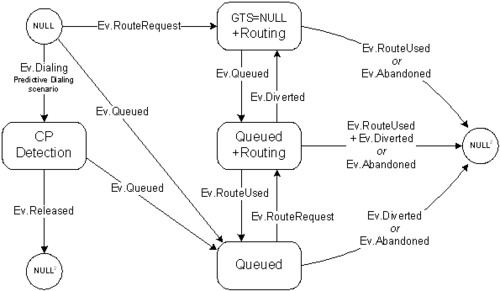 NoListen—A party cannot hear other participants on the call.

NoTalk—A party is muted, and other participants on the call do not hear that party.

Audit—A party is attached to a call as Service Observer or Service Assistant.

Bridged—A party is attached to the call with the Bridged Call Appearance feature.

State Modifiers further nuance the relationships between events and call states by allowing for intermediate sub states. These sub states provide additional information to the system, but may otherwise be unnecessary in the unified call-party state model.

The unified call-party state model uses Dialing, although not actually a party state, as a state modifier. This allows the system to handle the following scenarios, also illustrated in Modifier Dialing:

This modifier is set when the party information is not reliable. See Reliability in your API reference for details. 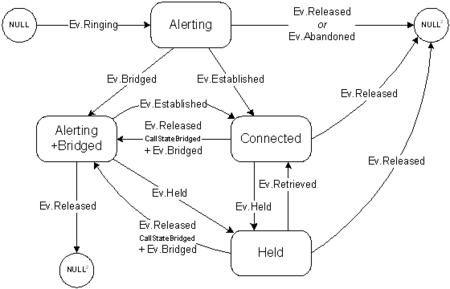 The Routing/Treatment State consists of the following properties:

TreatmentReq—The switch is waiting for a treatment to be applied to the call.

Treatment—A treatment has been applied while the call is located on a given device. 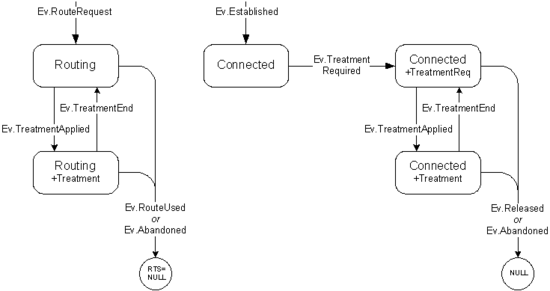 Routing (left portion) and Treatment States (right portion)
Agent States and Work ModesEvent Attributes
This page was last edited on March 22, 2018, at 00:48.
Comments or questions about this documentation? Contact us for support!