In this lesson, you will learn how to handle inbound Twitter interactions (Tweets), how to check the spelling of your messages before you send, and other Twitter-specific functionality. This lesson contains the following sections:

Twitter is an online social networking service and micro-blogging service that enables its users to send and read text-based posts of up to 280 characters, known as Tweets. It has been described as "the SMS of the Internet." These messages are posted to the user's Twitter profile or their blog, sent to their followers, and are searchable on Twitter search. Twitter also has a suite of advertising products to help brands and businesses promote their content within the Twitter experience. Businesses can use Tweets to reach users while they search for their interests on Twitter.

Workspace enables you to create and send outbound unsolicited messages to a Twitter user. There are three types: new timeline tweet, tweet with mention, and direct message.

In addition to the actions described below for each type individually, the following actions are common to all three:

This message goes to all followers of the channel. From the Agent Icon drop-down or Gadget drop-down,

You can attach an image to the new tweet.

You can send and receive a direct message using Twitter Direct. The contact must be a follower of yours and your direct messages are between you and the selected contact only. No one else can see them.

You can send a direct message to a contact (this is distinct from the direct message that you can send as a reply). From the main Workspace window or the interaction window, click the downward triangle/arrow to the left of the contact name, then select Twitter Direct Message: 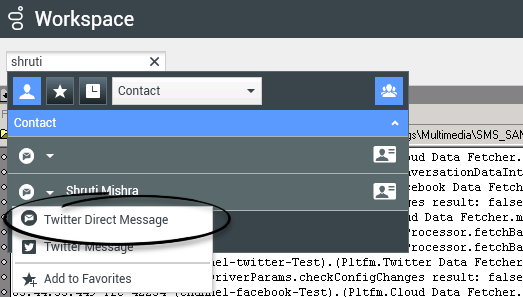 From the main Workspace window, click Accept on the Twitter Direct Message popup, and the interaction window opens:

You can view your message history, by clicking My Workspace > My History from the main Workspace window. From this window you can do a Quick search, Filter your results, or use the slider to search within a specific timeline.

To attach an image, click the Add Picture icon

, then use the resulting dialog box to navigate to the desired file.

The following image formats are supported:

Important
Some of the procedures and tasks below are media-specific, but you can apply the information when working with Twitter interactions.