You can deploy Interaction Workspace in two different deployment configurations, depending upon the arrangement of your network; they are:

Standard deployment of Interaction Workspace with a ClickOnce server

Refer to the documentation that accompanies Genesys Administrator and each of these components for information on setting up connections. 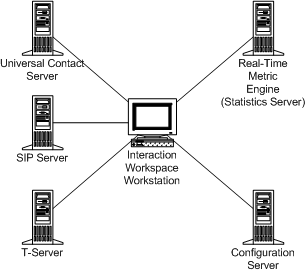 Interaction Workspace is integrated with the following Genesys 8 applications:

Interaction Workspace features a modular design that divides the application into several components that are served out to agents based on their roles. All agents receive common modules such as the Login and Go Ready module and the Main Window module, while other modules, such as the Contact Management module and the Team Communicator module are distributed only to agents whose roles include those modules.

This architecture supports the following customization:

For the Configuration Server connection, the code page identifier must be set in the general.non-unicode-connection-encoding key in the InteractionWorkspace.exe.config file.

You can use a screen-reader application or the keyboard to navigate the agent desktop interface.

Interaction Workspace is designed to maximize content readability for screen-reader applications. Interaction Workspace can be configured to be compatible with screen readers that support Microsoft UI Automation API, such as the Freedom Scientific application: Job Access With Speech (JAWS) version 11. Screen readers enable visually impaired (blind and low-vision) agents to use the desktop interface through text-to-speech or text-to-Braille systems. Interaction Workspace must be configured in the Configuration Layer to enable this compatibility (see Accessibility). These options can be set in the Configuration Layer as default values that can be overridden in the Agent Annex following the standard hierarchy configuration.

You can navigate the Interaction Workspace interface by using a keyboard or other accessibility device that is enabled by keyboard navigation. This feature improves the accessibility of the interface by not forcing the user to navigate by using the mouse. Navigation works panel to panel and, within a panel, component to component. In general, you can use the TAB key to set the focus on the next component; use the SHIFT-TAB key combination to set the focus on the previous component. You can use this method to navigate the Menu bar, the interaction interface, the tabs, and so on.

Interaction Workspace implements the Remote Authentication Dial-In User Service (RADIUS) security protocol to prevent illegal system access, track system use, and limit the access of authenticated users. To access the system, users must provide their credentials and connection parameters for authentication before they can be granted limited system access. The user must provide both a user name and a password to gain access to the Configuration Layer, which is used to obtain a list of existing places, privileges that are specified for the user, and configuration of the agent application. A place is mandatory for all Interaction Workspace agent scenarios. A role or roles are assigned to agents upon login. Agents do not have access to system aspects outside of those that are defined by their assigned roles.

Interaction Workspace also employs Transport Layer Security (TLS), which is a cryptographic protocol that provide security and data integrity for communications over networks such as the Internet. TLS encrypts the segments of network connections at the transport layer from end to end. For more information about TLS, refer to the Genesys TLS Configuration chapter of the Genesys 8.0 Security Deployment Guide.

The Framework 8.1 SIP Server Deployment Guide provides detailed information about Business Continuity architecture and configuration. A disaster is defined as the loss of all Genesys components that are running on one or more physical sites. Business Continuity is a set of automated procedures that enable agents that are connected to the site that is experiencing a disaster to connect to an alternate site to continue working normally with minimal data lost. This is known as Geo-redundancy. In the event of a disaster, Interaction Workspace can be configured to maintain a dual connection to a pair of SIP Servers, a pair of Stat Servers, and a pair of Configuration Servers at two different sites. Two or more switches must be configured in Genesys Administrator to have identical agent extensions and logins. Agents must be able to log in to any synchronized switch at any time. In a typical Business Continuity set up, two pairs of High Availability (HA) SIP Servers are implemented. Each pair of SIP Servers, the Preferred server and the Peer server, use synchronized (not replicated) configuration layer objects. Agents are logged in to the Current Primary server in their Preferred site HA Pair. Each agent has two SIP Channels and two SIP Endpoints registered on each server. Interaction Workspace always tries to connect to the Preferred server. If it is not available it connects to the alternate (Peer) server until the Preferred server becomes available again. The agent state is set to Not Ready until a connect with one or the other server is established.

There are no technical licensing requirements for Interaction Workspace.