Other guides
Getting Started / Variables
current
Jump to: navigation, search

You can use two types of variables in Designer:

Variable names must be alphanumeric, but not start with a numeric character. For example:

Variable values may be:

Important
The block properties page will indicate if single quotes are required.

Important
User variables may not be initialized correctly if their value is set to one or more system variables in the Initialize phase itself. This phase should be used to declare variables, but their values should be assigned later using an Assign block if the value or the value expression involves a system variable.
Warning
You can delete a variable even if it is required by the application. Designer validates the application when you click Publish, at which time it checks for deleted variables.

You can enable the Secure check box to indicate that a variable is secure and must not be logged or recorded. The application must be published for any changes to these settings to take effect.

The Initialize phase has a second tab that lists system variables - these variables are created with the application and cannot be deleted.

The following system variables are available:

Important
VAR action IDs are stripped of spaces and pipe characters (|). This includes implicit actions that are generated when a caller enters a shared module.

Use the IVRProfileName variable (User Data Key: gsw-ivr-profile-name) to associate the application VAR metrics with an IVR Profile. Use a value of auto to auto-detect the IVR Profile.

Use the GVPTenantID variable (User Data Key: gvp-tenant-id) to associate the application VAR metrics with a tenant. Designer attaches the value to user data. Use a value of auto to auto-detect the tenant.

These variables are listed in the properties of blocks once they are defined.

Designer lets you assign values to variables in different ways. These examples show a few of the methods you can use to assign different types of values to a variable, including a JSON value.

The easiest (and recommended) way is to assign a value to a variable using the Assignments tab on the Assign Variables block. 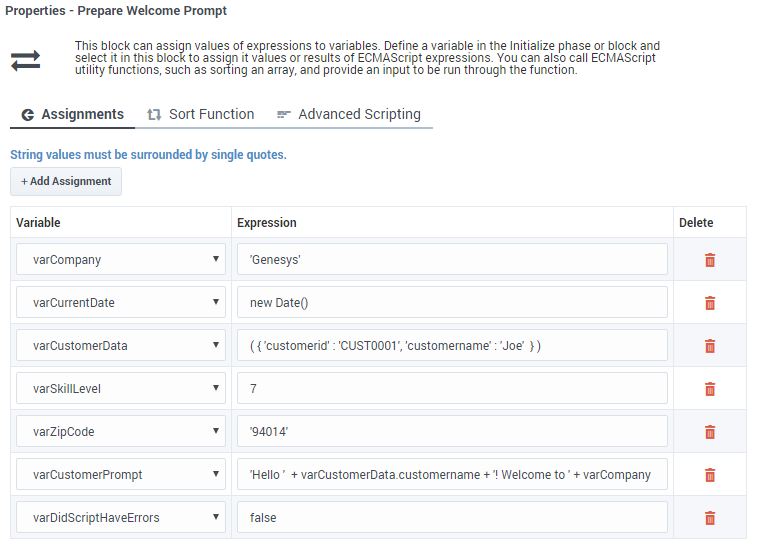 You must use single quotes (' ') when specifying string values, but you can assign numeric values without quotes. Note that the varZipCode above is a string data type (the single quotes tell JavaScript to treat it as a string), but it contains only numbers. It's important to remember that JavaScript treats string and numeric data types differently. For example, 1 + 2 = 3, but ‘1’ + 2 = ‘12’.

JSON data (for example, varCustomerData) is typically retrieved from an external data source, but you can also form a JSON string in the application. JSON strings must be enclosed in brackets ( ) and should follow the rules and syntax for JSON strings as defined by JavaScript. Note also that variables can easily be used to form part of the JSON string (as represented by varCustIDFromCRM, in the example shown below).

The varCustomerPrompt above shows a simple string expression, with the different string segments linked together by a +. If used in a Play Message block, it will play “Hello Joe! Welcome to Genesys." It accesses a property of the varCustomerData object using the “.” notation and combines it with the welcome message.

Important
Although the terms ECMAScript and JavaScript are used interchangeably throughout this Help, Designer technically supports ECMAScript and does not support JavaScript functions that are typically used for web-browser based applications, such as pop-up windows, alerts, and so on.

Here is another example of how you could build a JSON expression. It contains mostly hard-coded strings, but also uses a variable to form part of the JSON string:

If your application requires you to go beyond simple assignments and use JavaScript constructs like loops or multiple nested conditions, you can use the Advanced Scripting tab, which allows you to compose valid ECMAScript or JavaScript.

Important
Advanced Scripting is an optional feature and might not be enabled on your system. To enable this functionality, contact Genesys.

To use this feature, you need a basic level of familiarity and understanding of ECMAScript syntax and rules. Any errors in the script can cause erratic behavior, so test your changes to make sure that your script works correctly.

Warning
Use caution! Designer can check your script for syntax errors, but cannot validate it nor check for runtime errors that might occur when the script runs during a call.

In this example, the script sets the variable varOrdersPrompt to "3 Laptop bags, 2 Phone chargers, 1 Super rare fish". Here's how it works:

The sample script below first initializes JSON data in varOrderDetails so that it becomes an array of three JSON objects. Each JSON object has properties — item, quantity, backordered. The script then proceeds to loop through orders and forms a string to play back to the caller to notify them of their order status.

Note that this script uses variables in two scopes: 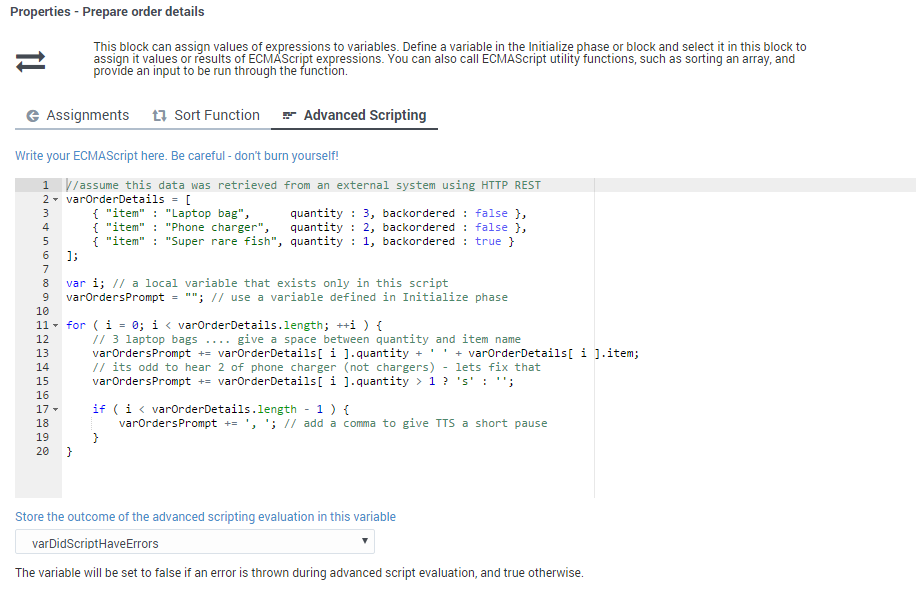