A Model is built on a Predictor and includes the same target metric. Each Model has a subset of the agent and customer features present in the Dataset. The Feature Analysis report helps you to identify the features with the strongest impact on the target metric. You can create multiple Models for the same Predictor, each with a different set of features selected.

When you create a Predictor, a full feature set Model is created automatically, including all the agent and customer features populated from the Predictor. A Predictor can have a number of Models associated with it.

The full feature set Model comprises as complete a set of Local Models as possible based on the amount of data available for each agent (one Local Model per agent). If it's not possible to train a Local Model for a specific agent, GPR generates the following log message, indicating that the Local Model has been skipped for a specific agent, and omits that agent from the full feature set Model: WARNING <BOTTLE> models.py:420 RETRAIN: Skipping training for individual model <agent_id> since no data is available for classes.

For example, you might have a Boolean metric, such as FCR. If, for a specific agent, all entries from the training set had only examples of one Boolean class (that is, either all were resolved, or none were resolved), GPR cannot create a Local Model for that agent.

Creating and Configuring a New Model

To open the configuration menu, click the Settings gear icon, located on the right side of the top menu bar: 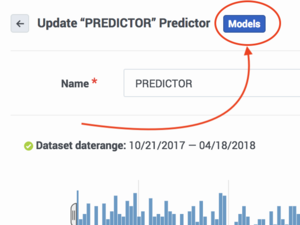 Edit the fields as explained below. 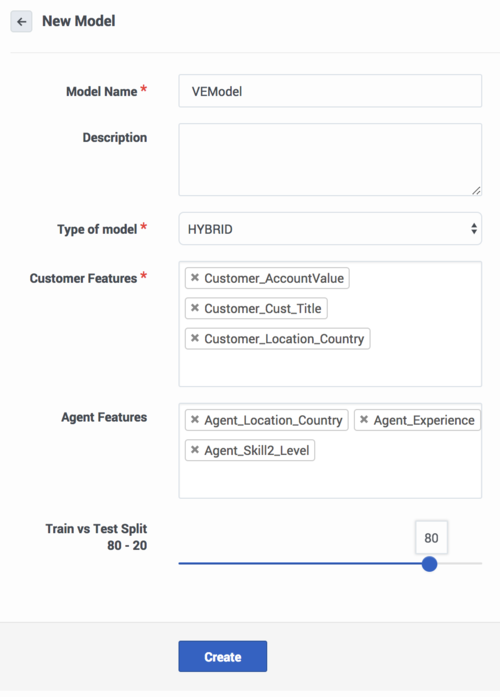 Set the Training and Testing Percentages

To set this value:

Train Your New Model or Retrain an Existing One

After you create your Model, you must train it on your data.

The Training job can take a fairly long time, depending on the size of your Dataset. Click the Jobs tab to monitor job progress. 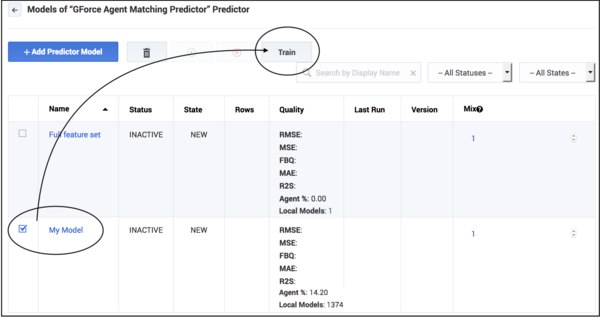 After you train your Model, the Quality column shows values for various methods of evaluating how well the Model works. The evaluation methods are selected automatically depending on the type of Model.

How different Model types are evaluated for quality:

You can analyze the effectiveness of classification Models, which are evaluated by the area-under-curve (AUC) method, with a Receiver Operating Characteristic (ROC) Curve. This type of report is accessible only for classifier Predictors (Predictors that use a Boolean metric). Every trained Model for such a Predictor has an active AUC link in its row in the Predictors list.

The ROC curve is a way to see the tradeoff between sensitivity and (1 - specificity) for different thresholds of probability for classification. This is the preferred way to view Model Quality for classifiers. 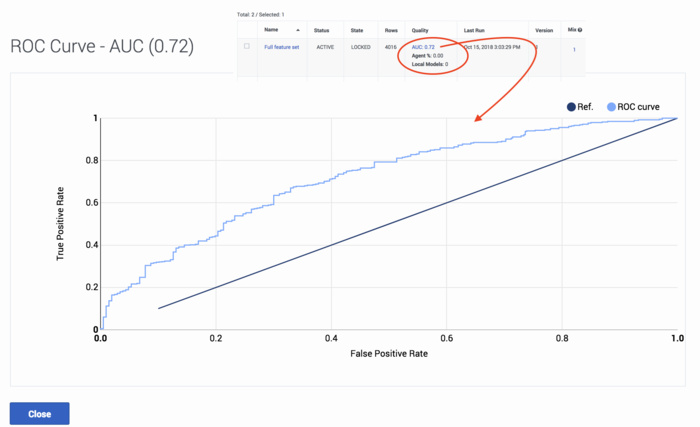 After your Model is trained, activate it to use it for routing.

Procedure: Activating multiple Models at once

You can test Model performance against other Models by activating multiple Models at once. You can then choose how much traffic is scored using each Model. Models are selected at random to score interactions, with the number scored by each Model dependent on how you weight the Model using the Mix parameter. 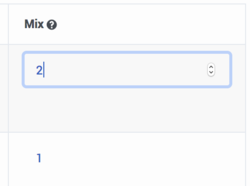 You can only edit a Model that has not yet been activated.

Once a Model has been activated, it can not be changed or edited again. Even if you stop (deactivate) it, the Model remains locked.

To edit an activated Model, copy it. Only an active, trained Model can be copied. When you make a copy, you are creating a new Model that has the same name as the original Model with the added suffix <copy><version number appended>.