The following figure illustrates a minimal deployment that consists of agent workstations that are connected directly to the Genesys back-end servers.

The Workspace Desktop Edition is built by using a loosely-coupled application library. This library is used by developers to create composite Windows Presentation Foundation (WPF) applications. It is designed to help architects and developers achieve the following objectives:

The Workspace Desktop Edition provides guidance and implements patterns that make customization easier. In general, all of these concepts have a common aim, which is to implement loosely-coupled applications and ease extensibility.

As defined in the software development kit (SDK), a module is a software element that can be individually developed, tested, and deployed by different teams. Workspace Desktop Edition contains several modules that can cover one or several layers of the application. They can contain views, presenters (ViewModel), or models. In general, the functional modules cover the full stack, whereas the service modules focus on a particular layer. By using a modular approach in the application, Genesys is able to provide an SDK to developers who are planning to add customized code into Workspace Desktop Edition. The figure below summaries the various types of modules in Workspace Desktop Edition. 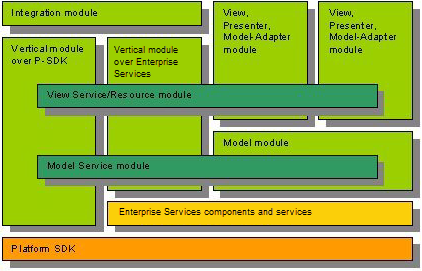