T-Server supports the registration of devices that are hosted in the Office 365 cloud, and third-party call control (3pcc) is provided via a T-Library client (Workspace Desktop). T-Server provides partial agent functionality for such devices; specifically, the agent status is based only on presence availability, because of limitations on the Skype for Busines side.

User Endpoint devices hosted in the Office 365 cloud are configured as devices of type Extension with the Switch Specific Type parameter set to 2.

A new extension key, PresenceType, is introduced in DN-status events to indicate the type of presence that the Connector currently monitors for the DN device. The following values are supported: 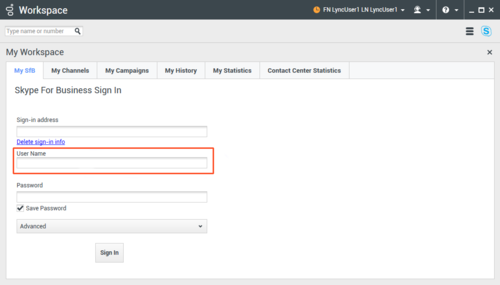 Starting with version 8.5.000.83, the Workspace Plugin user interface is modified to support federated agents. It now shows the User Name field when an agent logs in the Skype for Business Front End Server. This field can be left blank if the user name is the same as the sign-in address. For federated users, the User Name differs from the Sign-in address.