This section describes the general steps for setting up a high-availability (HA) environment for T-Server and UCMA Connector for Skype for Business.

The main high-availability scheme for most server roles in Skype for Business is based on server redundancy via pooling. If a server running a certain server role fails, the other servers in the pool running the same role take the load of that server. This applies to Front End Servers, Edge Servers, Mediation Servers, and Directors. Skype for Business also enhances Back End Server high availability, by supporting synchronous SQL mirroring for your Back End databases.

Note: Skype for Business high-availability features are available for the Enterprise edition only.

The high-availability architecture of T-Server for Skype for Business implies the existence of redundant applications, a primary and a backup. These are monitored by a management application so that, if one application fails, the other can take over its operations without any significant loss of contact center data. The Framework Management Layer currently supports two types of redundant configuration: warm standby and hot standby. Microsoft Skype for Business Server supports only hot standby.

T-Servers operating with the hot standby redundancy type require a special CTI HA technical license, which allows for high-availability implementations, in addition to regular T-Server licenses. Neither T-Server in a redundant pair configured for hot standby starts if this license is unavailable. Moreover, the primary and backup T-Servers must use the same licenses to control the same pool of DNs. If your T-Servers are configured with the hot standby redundancy type, order licenses for CTI HA support.

When T-Servers operate in a high-availability environment, the backup T-Server must be ready to take on the primary role when required. For this purpose, both T-Servers must be running and must have the same information. When you configure redundant T-Servers to operate with the hot standby type, the primary T-Server uses the connection to the backup to deliver synchronization updates. Genesys recommends that you enable the Advanced Disconnect Detection Protocol (ADDP), for this connection. Do so using the configuration options in the “Backup-Synchronization Section” section. Refer to the T-Server Common Configuration Options chapter for option descriptions.

Important
Genesys strongly recommends that you install the backup and primary T-Servers on different host computers.

Genesys uses the expression hot standby to describe the redundancy type in which a backup server application remains initialized, clients connect to both the primary and backup servers at startup, and the backup server data is synchronized from the primary server. Data synchronization and existing client connections to the backup guarantee higher availability of a component.

T-Servers start simultaneously and connect to the switch via Connector component. At T-Server startup, the Management Layer assigns the role of the primary server to T-Server 1, and the role of backup to T-Server 2. T-Server clients register with both T-Servers, but only the primary T-Server handles client requests other than the registration requests. The internal T-Server information is synchronized between the primary and backup T-Servers, such as: 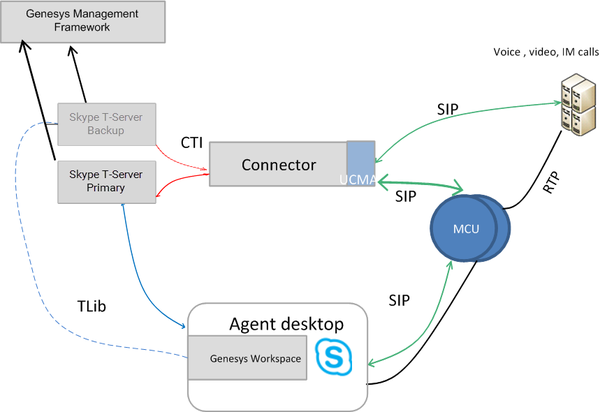 The general guidelines for T-Server hot standby configuration are:

The high-availability architecture for UCMA Connector for Skype for Business implies:

To prevent loss of calls if the server disconnects, the Connector stores all necessary HA call data, such as:

This information allows UCMA Connector to recover calls after the restoration of communication with Skype for Business.

This information allows T-Server and UCMA Connector for Skype for Business to recover calls after Connectors restart.

Note: Pooling of UCMA Connectors is available only with Skype for Business Server 2015.

Storage of UCMA HA data and synchronization of HA data between UCMA Connector and T-Server work automatically and do not require additional configuration.

Configuring Skype for Business User EndpointsPerformance
This page was last edited on August 7, 2019, at 18:11.
Comments or questions about this documentation? Contact us for support!