Starting in release 8.5.2, GWS supports a deployment with multiple (two or more) data centers. This section describes this type of deployment.

A multiple data center deployment implies a logical partitioning of all GWS nodes into segregated groups that are using dedicated service resources, such as T-Server, StatServers, and so on. 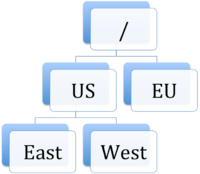 For data handling and distribution between GWS data centers, the following third-party applications are used:

A typical GWS data center in a multiple data center deployment consists of the following components:

The following diagram illustrates the architecture of this sample multiple data center deployment. 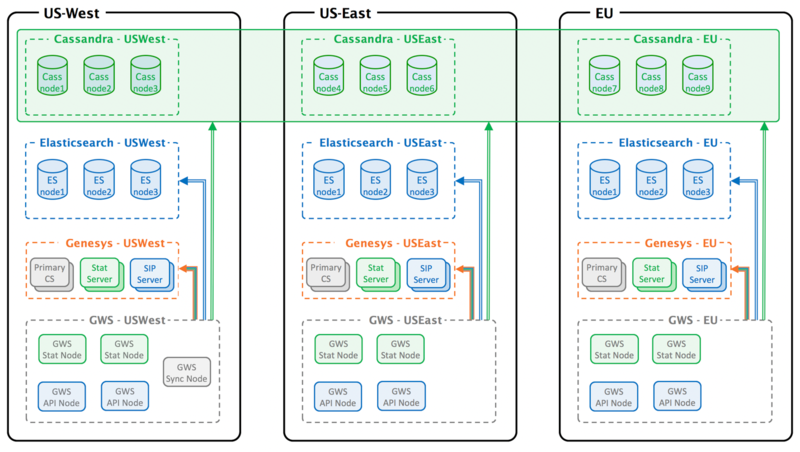 Note the following restrictions of this architecture:

GWS does not support traffic distribution between GWS nodes natively. To enable this, any third-party reverse proxy can be used that can provide a session stickiness based on association with sessions on the backend server; this rule is commonly referred to as Application-Controlled Session Stickiness. In other words, when a GWS node creates a new session and returns Set-Cookie in response, the load-balancer should issue its own stickiness cookie. GWS uses a JSESSIONID cookie by default, but this can be reconfigured by using the following option in the application.yaml file:

This section describes the additional configuration required to set up a multiple data center deployment.

Important
In a DR environment (for instance, having two separate SIP Servers connected to a WS Cluster Application with different locations specified), it is possible that the Place can contain two DNs of the type Extension. However, the two DNs must belong to different switches and the API server will be mapped only to one of them during the StartContactCenterSession operation. In such cases, the DN visibility depends on the nodePath parameter in the application.yaml file in the API server and on the location attribute of the SIP Server connection in the WS Cluster Application.

Configure Cassandra in the same way as for a single data center deployment (described earlier in this document), making sure that the following conditions are met:

The position of each node inside the GWS Cluster is specified by the mandatory property nodePath provided in application.yaml. The value of this property is in the standard file path format, and uses the forward slash (/) symbol as a delimiter. This property has the following syntax:

In addition, set the following options on all Stat nodes:

A Synchronization Node is a special node, and as indicated elsewhere in this Guide, in Deployment Guide, this node imports existing data from Configuration Server and keeps track of all changes.

Warning
Only one Sync Node can be running at any point of time even if you have two sync nodes in your architecture. Genesys strongly recommends that you deploy Sync node in the same data center where the primary Configuration Server is located.

If any disaster causes this node to terminate or become unavailable because of network issues or the whole data center goes down, provisioning of any object in Configuration Server will not be reflected in the GWS cluster until the Sync node is recovered. Other functionality related to Agent activity is not affected in this case.

The GWS Cluster Application object (typically named CloudCluster) in the Configuration Database must be configured with a specified location for each connection to Genesys servers, like Configuration Server, Stat Server, T-Server, and so on. This setting defines which server instance is used by the GWS node based on its position in the GWS Cluster. The visibility resource rule is based on comparing the nodePath attribute and the specified specification in connections.

Set these locations as Application Parameters of each connection, as follows:

where <path-to-node-in-cluster> is the same path to the data center specified by the nodePath property in application.yaml.

Before deploying new GWS nodes, you must extend the Cassandra cluster by adding new nodes into the data ring and updating the keyspace definition with a replication strategy for this new data center. Using the CQLSH utility, run the following command to update the existing Cassandra keyspace:

After you have deployed the new Cassandra data center, you can use the normal procedure to deploy additional GWS nodes.

Before removing a Cassandra data center, you must stop all GWS nodes in this data center to avoid writing data into Cassandra.