The following component test cases are described in this section:

Testing was conducted on Windows 2003, Windows 2008 (x86 and x64), and Windows 2008 R2. But not all testing was executed in the same release. In general, performance results were similar when the Media Control Platform was installed on either version of Windows. The next Figure shows slight differences.

Figure: Call Setup Latency Versus Concurrent Calls (MCP on Windows) depicts the call setup latency metrics for each Windows version when the VoiceXML_App1 was executed as the background load. 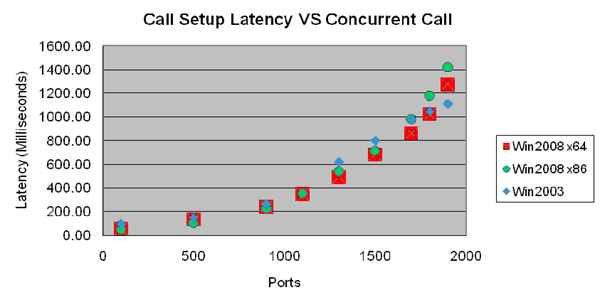 The latency numbers are quite close for ports below 1300, while they are slightly higher on Windows 2003 when ports are 1300 or higher. This trend continues up to 1800 ports, at which point latency on Windows 2008 exceeds those on Windows 2003.

In Figure: System CPU Usage Versus Concurrent Calls (MCP on Windows), the graph depicts CPU usage for the overall system on each Windows version, when testing was performed by using VoiceXML_App1 and the results were scaled.

Testing was conducted on Red Hat Enterprise Linux 4, RHEL 5 (x86 and x64), and RHEL 6 x64. However, not all testing was executed in the same release. There were no significant differences in performance on RHEL 4 & RHEL 5 (both x86 & x64), while the performance was better on RHEL 5 than on RHEL 6.

Below is the graph of call setup latency measured in different Red Hat Linux systems on physical servers, when RHEL 6.x x64 (VXML_App1 was executed as background load: Figure: Call Setup Latency Versus Concurrent Calls (MCP on Linux) depicts the call setup latency metrics for RHEL 4 and RHEL 5 on physical servers when VoiceXML_App1 was executed as the background load. 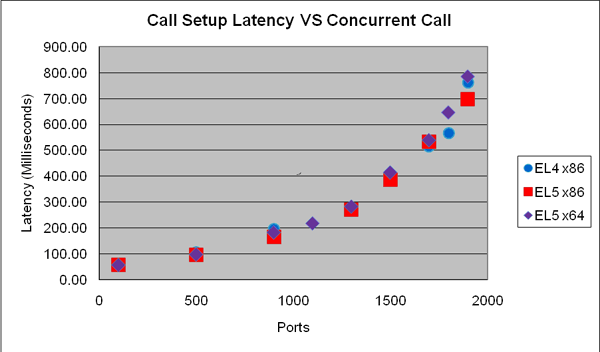 All three Linux versions showed latency results that were almost in line with one another at 1700 ports or lower. Above 1700 ports, which is beyond Genesys QA preferred peak capacity, there were some differences.

In Figure: CPU Usage Versus Concurrent Calls (MCP on Linux), the graph provides a comparison of the overall CPU usage when VoiceXML_App1 is executed. 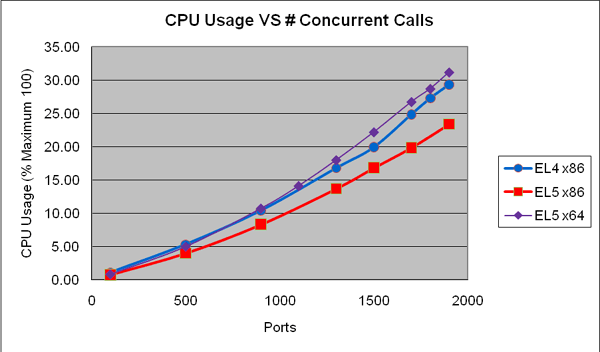 There were no significant differences between Linux versions for overall CPU usage, and overall performance was similar, even when multiple simultaneous factors, such as call setup latency and call pass rate, were considered.

Performance differences between Linux and Windows depends on specific use cases. The maximum number of concurrent ports on Linux is slightly higher than on Windows in some test cases in which there were more ports, such as MSML with CPD, but worse for other test cases, such as those in which G.711 and G.729 transcoding was used.

GVP overall performance on Linux and Windows is quite similar, and although the test cases performed on both Windows and Linux were not identical, the peak capacity was not significantly different. 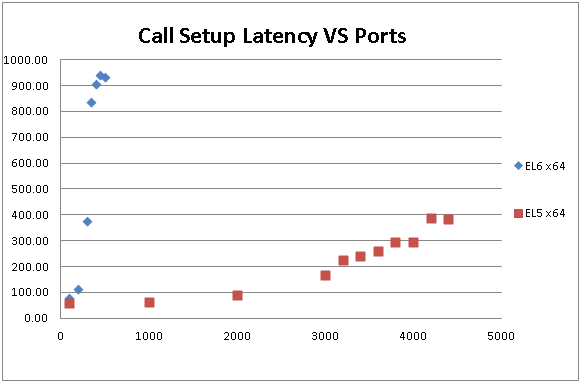 The effect on Resource Manager performance differs, depending on the type of call being processed (for example, conference versus announcement calls), but generally, a peak of 800 CAPS can be sustained for call types such as call routing and conference, and regardless of whether it is in an HA or non-HA configuration. This applies to all Windows versions and most RHEL servers except RHEL 6 x64.

The same capacity results were achieved when the Resource Manager was tested using both UDP and TCP due to a bottleneck when it reached the 3GB virtual memory limit. 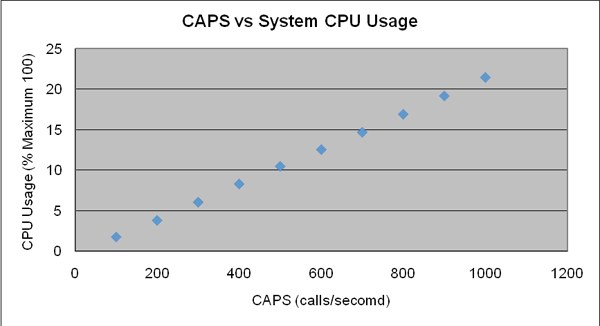 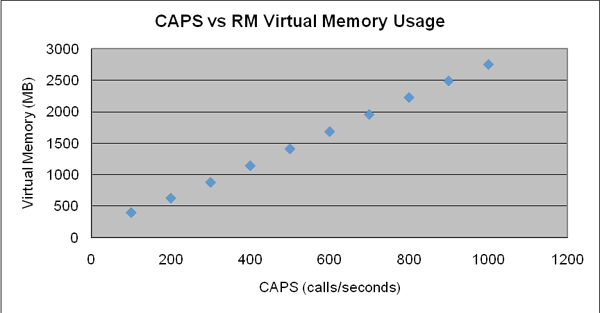 When a large number of Direct Inward Dialing (DID) numbers are configured in a single tenant, the Resource Manager performance, again, is slightly degraded. When 100,000 DID numbers are tested with 262 IVR Profiles (without the use of DID ranges or wild cards, for example, a long, simple mapping list), peak capacity is 600 CAPS. 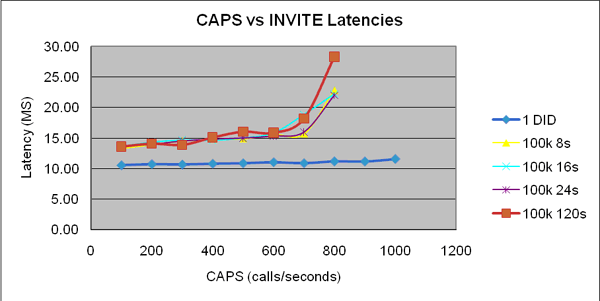 The two previous scenarios (1000 tenants with one DID entry each and 100,000 DID in a single tenant) produce the worst results. Resource Manager can achieved better performance results when multiple tenants are configured with a small number of DID entries per tenant. Resource Manager was tested with the requirement of 1 million DIDs distributed among 32 tenants, each containing 30-35 K of DID entries. (A 4MB size limitation exists for Management Framework objects). Even in this configuration, the Resource Manager still achieved 800 CAPS. 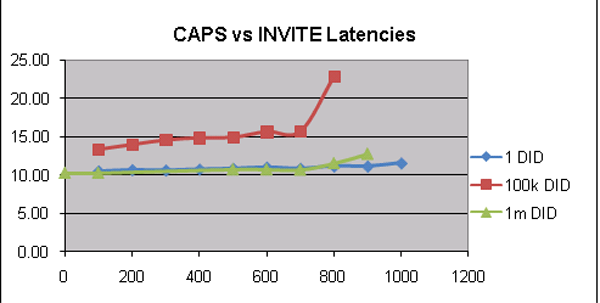 In Figure: CAPS Versus SIP INVITE Latencies (Resource Manager), the SIP INVITE latency is almost in line with one DID entry until capacity reaches 900 CAPS, then it increases. The virtual memory is also close to the 3GB limit.

Performance superiority of RHEL 5 x86 over RHEL 6 x64 was observed during RM testing. Below is the graph for propagating latency of INVITE to compare RHEL 6 x64 and RHEL 5 x86: 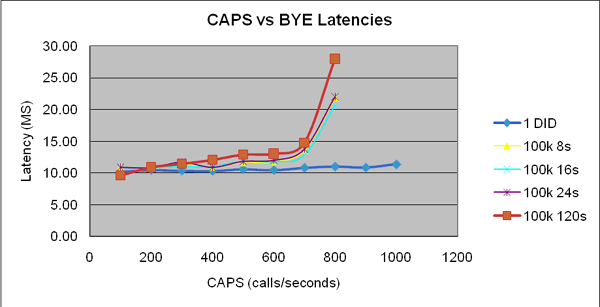 Latency increased significantly on RHEL 6 x64, even at low CAPS.

The MRCP Proxy performance is measured in terms of MRCP sessions and is benchmarked by using simulated MRCP v1 servers and clients. A typical 10 second MRCP session for either an ASR or TTS request used for testing.

The peak capacity is achieved at 1,600 concurrent MRCP requests per second (half ASR and half TTS) in CAPS, but the MCRP Proxy can hold 16,000 MRCP sessions in total. Beyond 1600 CAPS, it might still respond. However, the entire session becomes quite lengthy and will eventually time out. Figure: ASR Call Duration Versus CAPS—MRCP Proxy (MRCPv1) and Figure: TTS Call Duration Versus CAPS—MRCP Proxy (MRCPv1) depict the ASR and TTS 95th percentile of call duration. The results indicate that the call duration beyond 800 CAPS more than doubles.

The performance of PSTN Connector is measured in terms of T1/E1 spans. Two Dialogic DMV Media Boards, which provide 8 T1/E1 spans, were tested in a machine with a Dual Xeon, 3.0GHz CPU. Also, all other components such as the Media Control Platform, Resource Manager, and SIP Server were installed off board.

CTI Connector performance was tested in two scenarios, in which a Play Treatment application was used with two different transfer types (a bridge transfer and a blind transfer)NGI. The Media Control Platforms were configured to use NGI and GVPi, respectively.

Beyond peak capacity, the overall call-pass-rate dropped below the 99.95% criteria. Figure: PD Versus CPU Usage (CTI Connector) is a sample of the CTI Connector overall CPU usage versus port density CAPS when NGI is used in a blind transfer scenario: 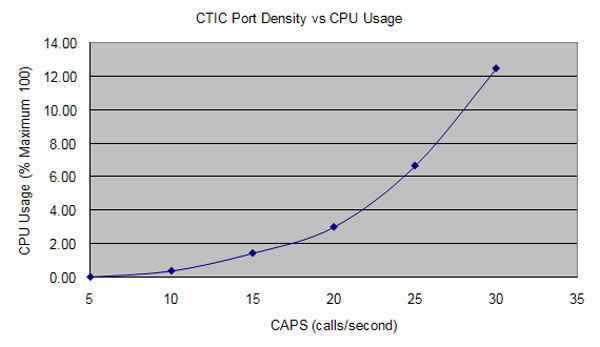 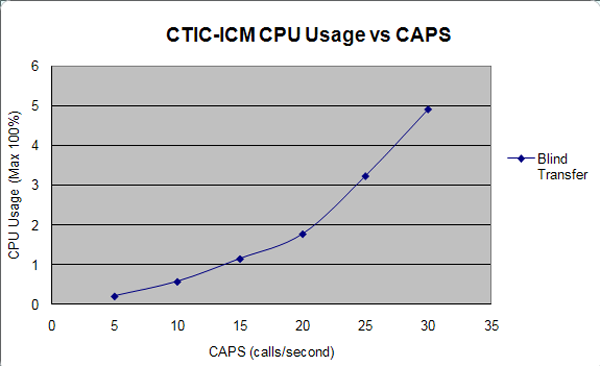 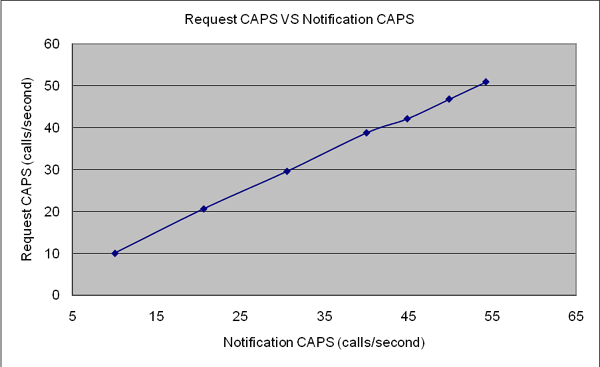 The Supplementary Services Gateways peak capacity result is 65 CAPS (using GVP 8.1.5 with SIP Server 8.1.0), 50 CAPS (using GVP 8.1.3 or later and SIP server 8.0.4) and 40 CAPS (using pre-GVP 8.1.3 and pre-SIP Server 8.0.4). These results are due to a bottleneck on the SIP Server side of the network--multiple Media Control Platforms are used to provide a sufficient number of ports to handle VoiceXML applications, regardless of their complexity. The call rate can exceed SIP Servers peak capacity, but the requests (which are stored on the database server) tend to accumulate. If egress rate is not high enough, the stored request records can easily reach the database limit of 100,000 records.

A use case was conducted on Microsoft SQL 2008 and Oracle 10g R2 Enterprise Servers, with the Resource Manager and the Media Control Platform streaming information (including CDR, upstream, and SQA data) to the Reporting Server for each call with a default log level. The result was a peak capacity of 270 CAPS.

The same use case was conducted on an Oracle 11g Enterprise Server only; the result was a peak capacity of 300 CAPS.

Tip
For this test case, the Reporting Server was installed on a Dual Quad Core Xeon computer with a 2.66GHz CPU, separate from the database server. The Microsoft SQL and Oracle Database Servers were installed on a 15-disk Disk Array computer with a Dual Quad Core Xeon, 2.66GHz CPU. For practicality, a simulator was used instead of a real MCP (or a Reporting Server client inside MCP) to run the tests. Also, simulated data (five MCP metrics per call) was used for the MCP simulator to submit the data to the Reporting Server.

The Reporting Server can connect to other GVP components by using TCP or TLS.