Other guides
8.1.1
Jump to: navigation, search

Genesys SIP Voicemail (GSVM) can be deployed as a highly-available (HA) pair of voicemail servers, providing redundancy for the communication paths between the server components, as well as for the database information associated with the voicemail messages themselves.

In this scenario, all the GSVM components are configured in a HA pair. The failure of either the VM server or VM SIP server collocated on the primary host will result in a coordinated switchover of the VM Server and VM SIP Server in the backup host. The switchover for GVP components is defined by the individual HA deployment modes of GVP and Premise SIP Server.

In this scenario, the failure of a single component results in a coordinated switchover of the entire solution from primary to backup server. This approach provides a more robust synchronization -- useful, for example, for Reporting purposes.

The following diagram shows the connections between Genesys components and the Voicemail host. 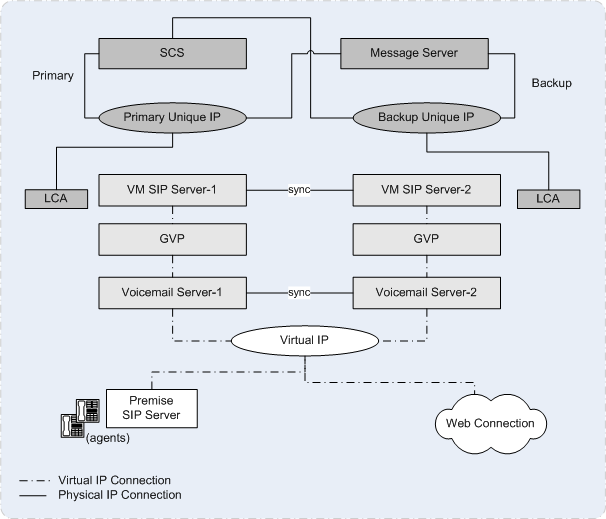 GSVM in an HA deployment supports redundancy for both server traffic and for database information related to the voicemail messages themselves.