A pair of VQ SIP Server instances runs in regular non-cluster mode and is used for agent reservation. URS selects a VQ SIP Server for sending a TRegisterAgent request based on the following configuration:

Reservation Based on Agent Location

The following diagram illustrates reservation based on the agent location:

When the environment option is explicitly set to sitex in URS, URS selects the VQ SIP Server for sending the TReserveAgent request based on VQ SIP Server's geo-location setting. In the diagram:

Agents handling multimedia interactions don't have DN ownership assigned. Interaction Server doesn’t report the agent location. URS selects the VQ SIP Server for sending the TReserveAgent request based on priority that is specified in the agent_reservation option, the [__ROUTER__] section of the VQ SIP Server. In the diagram, the reservation priority of SIPS_VQ_1 is 4, the higher digit the higher priority. So all reservation requests are sent to SIPS_VQ_1. If SIPS_VQ_1 is unavailable, reservation requests are sent to SIPS_VQ_2.

Agent Reservation conflicts occur when there are multiple URS instances trying to route a call to the same agent.

The following diagram illustrates an example of the reservation conflict:

In the above diagram, there is a call on SIP Server 1 and another on SIP Server 3. The calls are sent to URS 1 and URS 3. The routing Stat Servers on both nodes provide the same set of available DNs (DN1 and DN2). Both URS instances select SIPS_VQ_2 based on the location of Agent 2. The request from Node 3 is granted and the request from Node 1 is rejected. Node 1 makes another reservation attempt to DN1, which is granted.

Agent reservation conflicts are normal in a SIP Cluster environment where multiple nodes route different calls using the same strategy and target the same group of agents. In the SIP Cluster, conflicts cannot be avoided completely due to the distributive nature of the system, but they can be minimized as discussed in the following section.

In the above diagram, there is a centralized URS HA pair that serves the entire data center. There is no separate URS instance serving each node. The fewer instances of URS you use, the lesser the number of reservation conflicts.

However, in a centralized routing scenario, problems might occur when the connection between SIP Cluster nodes is lost and URS no longer has the complete DN availability view. As shown on the following sample diagram, URS is connected to Stat Server 1 and selects DN2 to route a call on Node 2. As a result, URS routes the call to a DN that is out of service, which leads to a failed routing attempt. 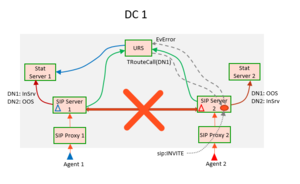 The following table summarizes node-based vs. centralized routing options, their benefits and limitations.

Location-based routing is another way to effectively minimize agent reservation conflicts. As discussed in the previous sections, URS has the ability to select a VQ SIP Server based on the agent location using the site key-value pair of AttributeReason in EventAgentReady.

Consider a sample scenario where the EventReadyAgent and EventQueued/EventRouteRequest events have the following values:

In the above sample, the value of site is populated as uswest. When a call arrives at the SIP Cluster node, in the EventQueued/EventRouteRequest messages in the AttributeExtensions, there is a geo-location key-value pair. The value of geo-location is the same as the site key. You can enforce URS to process matching these parameters by creating a skill expression using the sitex() function. For example, the routing strategy in Composer can use the following skill expression to route the call to only the agents logged-in to the local data center: