Stat Server is also a client of T-Server, which is essentially a translator or interpreter that mediates between a PBX switch and other Genesys software products. T-Server sends Stat Server information that is received from the PBX about what happens to each call or telephony object in the enterprise’s telephone network. Stat Server then acts as a server by interpreting T-Server’s information and providing it to other Genesys products.

Starting with release 7.0, Stat Server is also a client of Interaction Server, which is a component of Genesys Multi-Channel Routing.

Starting with release 8.5, Stat Server supports connection to multiple Interaction Servers for the same tenant. The resultant agent/place state is composed of partial states on Stat Server side.

The Figure below shows how Stat Server performs in an actual environment (the dashed entities are optional): 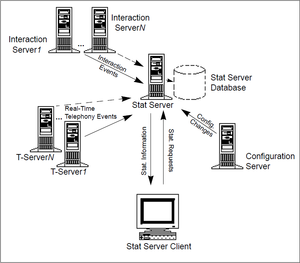 When a call comes into the PBX, it may be sent to any of the following:

This distribution decision may result from the PBX’s own algorithms, which distribute calls based on agent availability and other parameters.

Regarding Stat Server 7.0.2 and forward releases, when an Internet interaction enters an e-mail, chat, or Web callback server, the interaction is routed through Interaction Server for processing, before it is sent on to Stat Server. Stat Server monitors these various interactions tracking their status at any given moment, as well as historically over time.

Regarding Stat Server 7.0.1 and prior releases, when an Internet interaction enters an e-mail, chat, or Web callback server, MS T-Server emulates telephony events, so that Stat Server behavior can be described in PBX terms.

For example, a small contact center may create two different types of agent groups. One group handles calls in the main office and is defined by that location. Another group provides technical support; agents of this group work in different locations. In addition, a free-floating agent works at different stations; s/he can receive calls at any DN/media that s/he logs in to.

In this example, Stat Server simultaneously monitors each DN/media and prepares statistical information for configured agent groups and individual agents identified by a unique employee ID no matter where they are located. Stat Server re-creates what an individual agent is doing, based on the state of his or her media devices, and factors that agent’s work into the overall calculation for the entire group.

When the PBX routes a call to any of these agents, it also sends T-Server a message identifying the DN to which the call has been delivered. T-Server conveys that information to Stat Server and informs Stat Server whenever a change occurs in the condition of that DN. Stat Server updates information about each agent group, each agent in a group, and all individual agents.

Important
Statistical tools that switch vendors provide may take other approaches to statistical calculations than the approach implemented in Stat Server. Those tools may use different object types, different call definitions, and so forth. As a result, statistics that these tools generate may differ significantly from Stat Server statistics.

You use the Framework Configuration Layer to manage all configuration changes to the enterprise and its agents, groups, applications, and so on, and to notify all applications of the current contact center environment.

The term persistence means that a statistic, once requested by a client, continues to be calculated even after the client disconnects. Stat Server treats all requested statistics as persistent. When a statistic that is not already available on the server side is requested, it is automatically added to the Persistent Statistic Pool. Stat Server continues to calculate the statistic even after the requesting client closes it. When the client reopens the request for this statistic, the Persistent Statistic Pool resends it with accurate values to the client. By default, a statistic becomes obsolete and is removed from this pool three days after a client last requested it.

This page was last edited on October 29, 2014, at 18:26.
Comments or questions about this documentation? Contact us for support!