Relationships are defined between various contact center objects within Configuration Server. DNs are defined to a switch. Queues might be assigned to queue groups. Agents might be affiliated with places, and so forth. Relationships can exist only between compatible objects. The listing of objects for which interrelationships could exist form an object’s compatibility group. The Table below shows those groups of objects whose members Stat Server considers to be potentially compatible.

For telephony objects, some of these relationships are illustrated below. Objects' relationships defined within an Outbound campaign are illustrated in Hierarchy of Stat Server Campaign Objects. The Stat Server Java Extensions calculate statistics for multimedia objects, such as Workbin, StagingArea, Tenant, and Routing Strategy. These objects are discussed no further in this document. 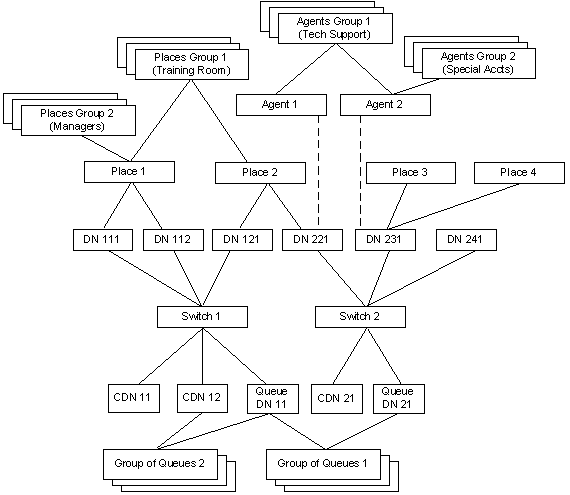 Associations Between Agents and DNs/Media Channels

Stat Server creates an association between an agent and a DN/media-channel using both the configuration data for the corresponding objects in the Configuration Layer, and the real-time events in the contact center. When an agent logs in to a DN or media-channel, the following sequence takes place:

When Stat Server receives EventQueueLogout, it:

When Stat Server receives EventAgentLogout for a DN, the logged-in list of queues becomes empty.

Stat Server’s support of the EventQueueLogout TEvent was introduced in the 7.0.3 release. The scenario below illustrates what Stat Server records to its database given different releases of T-Server and Stat Server.

The records Stat Server writes to its LOGIN table differ, depending on the versions of T-Server and Stat Server deployed in this environment. The Tables below illustrate the differences, given the following scenario:

On the G3 switch, Agent Ryan has three login IDs which are assigned only to him:

He is usually stationed at place Sales21, which has a phone with one DN configured—601.

Stat Server writes records 4 and 5 (in Table "LOGIN Entries Given T-Server 6.5 and Stat Server 7.0.2 (or prior)") to the LOGIN table, because in T-Server 6.5, there was no notion of logout from just one queue—the EventQueueLogout TEvent did not exist. Instead, the model, at that time, called for the logging out of all queues (by sending the EventQueueLogout TEvent) and then the logging back in of the remaining queue(s).

Tip
LOGIN Entries are presented here in pseudo-table format. Refer to “The LOGIN Table” section in the Appendix of the Framework Stat Server Deployment Guide for the actual format of this table.

The latest version of T-Server 7.0 and forward releases, however, do send the EventQueueLogout TEvent—but Stat Server versions prior to 7.0.3 did not recognize it as noted in the table below.

In the Table below, notice that Stat Server does add record # 4 upon receipt of the EventQueueLogout TEvent. In doing so, Stat Server logs out neither the DN nor the place.