Other guides
8.1.1
Jump to: navigation, search

Important
The purpose of this article is to provide recommendations to our customers for moving office-based agents to their remote home-based locations. 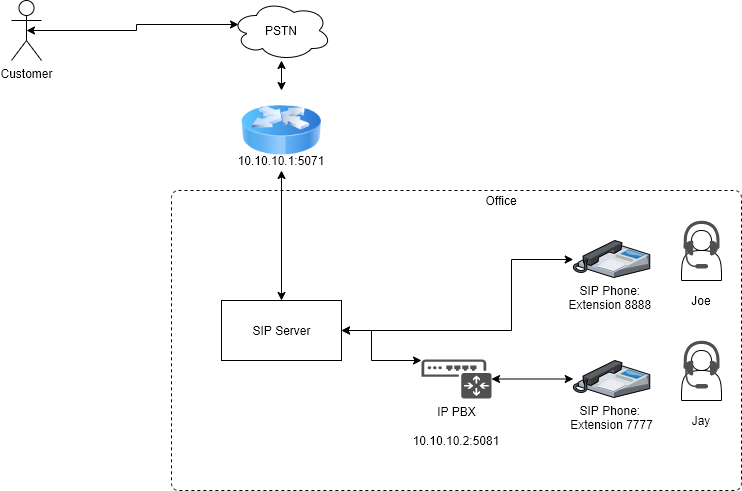 In the sample configuration of office-based agents:

Extension 8888 is a SIP Phone that is SIP-registered on the SIP Server and must have the following configuration of the contact option (other options are excluded):

Extension 7777 is a SIP Phone that is located behind the softswitch (IP PBX) and must have the following configuration objects representing the softswitch and SIP Phone:

There are several possibilities for moving office-based agents to their home locations: 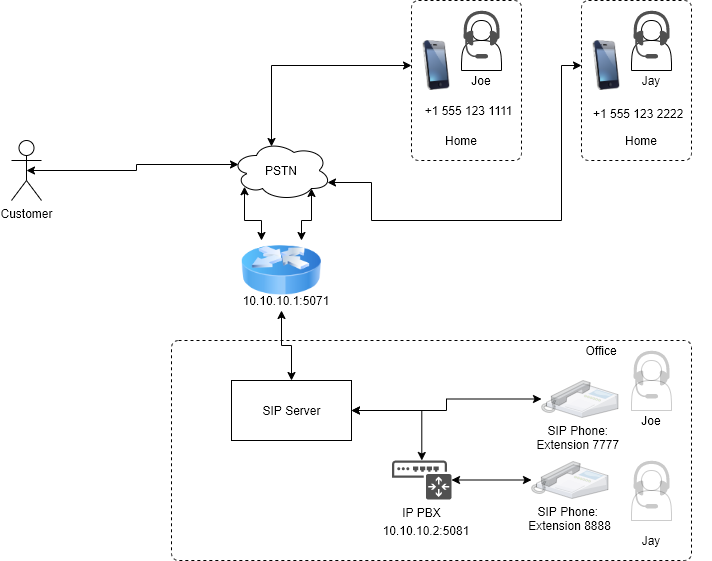 Remote agents behind the softswitch

In this sample configuration:

To reconfigure agents to their home locations:

Remote agents with nailed-up connections behind the softswitch

Remote agents with nailed-up connections behind a trunk prior to SIP Server version 8.1.102.93

For Agent Jay with the DN configured behind the softswitch, a configuration described in this section could be used only if a deployment meets the following prerequisites:

A special configuration must be enabled in WWE, which enables WWE to prompt an agent for the remote DN during login. The entered remote DN, +1 555 123 2222 in this case, is passed to the SIP Server in the agent-phone key-value pair of AttributeExtensions of RequestAgentLogin.

When an inbound call is routed to an agent logged in on DN 8888, SIP Server uses the provided remote DN to reach that agent.

For SIP Server to be able to reach an agent at the remote DN +1 555 123 2222, the softswitch VOIP Service DN must be created with the contact pointing to the SBC gateway.

For more information about this feature, see Remote agents with non-provisioned phone numbers.

Observe the following guidelines should to prevent significant service degradation: