Establishing a Connection to the CTI Link

Upon startup, CSTA Connector for BroadSoft BroadWorks opens a Transmission Control Protocol (TCP) connection to the BroadWorks XSP server. All requests (including channel-related requests for event reporting) are sent over the connection. Responses and events are received from the BroadWorks CTI interface through the same connection.

The figure below displays the initialization of the connection between the CSTA Connector and the BroadWorks XSP server: 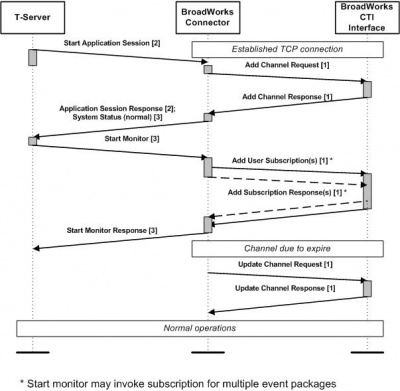 CSTA Connector uses the keep-alive functionality on the TCP connection level. In addition, the channel integrity is checked using the Get Application Controller State request.

If CSTA Connector detects a channel failure, CSTA clients are sent the system status and/or monitor stop messages indicating a failed CTI link(s). CSTA Connector then restores the TCP socket after the failure and re-creates the Event channel. Resource re-subscription must be re-initiated by the CSTA client.