SIP Server supports Shared Call Appearance (SCA) that enables a group of SIP phones to receive inbound calls directed to a single destination (shared line); that way, any phone from this group can answer the call, barge-in to the active call, or retrieve the call placed on hold. The shared line has sub-lines called appearances. Each shared line has one or more appearances; each appearance can handle one call at a time. The current status of each call (appearance) is displayed on each phone in the SCA group that includes outbound calls made from any phone in this group, which appear as they are placed from the same origination device.

There are several standards which enable implementation of SCA within the SIP protocol. Genesys SIP Server implemented the BroadWorks SCA standard that supports barge-in and is supported by leading phone manufacturers. Refer to your SIP phone documentation for information about SCA standards supported by your phone.

These are common scenarios where SCA can be used:

Note: According to the BroadWorks SCA standard, one DN cannot be a member of multiple shared lines. If, for example, an executive assistant needs to share lines with two executives, two independent shared lines must be configured on the assistant's phone. All of them are displayed at the screen and operable.

A sample call flow for a Shared Call Appearance scenario is as follows:

SCA and Other Feature Interaction

SCA related data is transported using the Call-Info and Line-Seize Event Packages. They are used in shared line call-related messages (INVITE, 180 Ringing, SUBSCRIBE, and so on).

SIP Server reports T-Library events separately for each Primary and each Secondary DN. No events are generated for a shared line itself.

In the DN object: 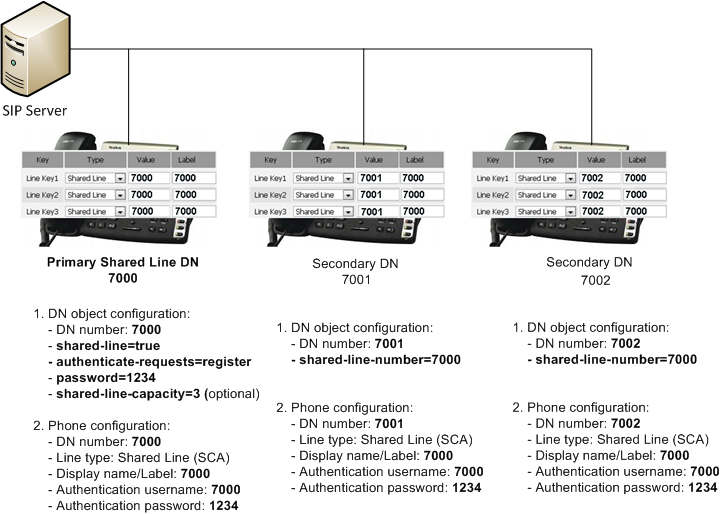 If a regular DN (neither Primary nor Secondary shared line DN) is changed to be a Primary or Secondary DN in the Genesys configuration, SIP Server does the following:

If a Primary or Secondary DN is changed to be a non-shared line DN, SIP Server does the following:

Indicates if this DN is used as a Primary shared line number.