In order to use SCXML-based treatments, Outbound Contact makes use of three components/applications:

SCXML-based treatments are typically hosted/stored on an Application Server (along with other Genesys SCXML scripts, such as SCXML-based strategies) and provided to OCS based on parameters contained in HTTP requests. The treatment-uri option identifies the location of these scripts.

OCS connects to and retrieves SCXML documents (flexible treatments descriptions) from the Web or Application Server in the following ways:

The SCXML engine is a subcomponent of OCS that leverages the Genesys SCXML library built into OCS, and which parses the SCXML treatment script. When each record or chain of records associated with the campaign is accessed for processing, the engine creates an instance of the state machine and requests the SCXML treatment from the Application Server. When the record is processed (for example, the call is answered and then completed), the associated state machine instance is stopped.

A state machine is an SCXML treatment script launched by the SCXML engine, that includes states, actions, events, and transitions, designed to inform OCS on how to contact customers during a campaign.

The following figure illustrates the scenario in which the SCXML engine is used to apply an SCXML treatment. 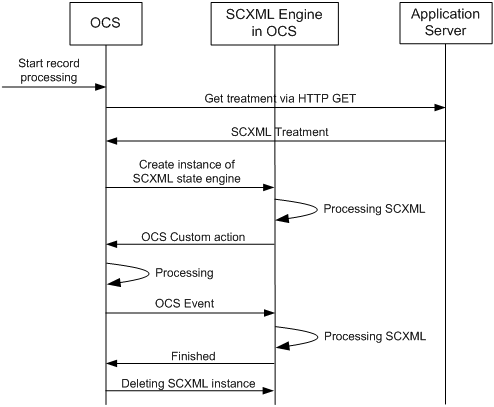 After a particular instance of the state machine is restored, OCS sends the ocs.daytime_change event to the instance so it can adjust its behavior according to the current daytime interval.

The following tables describe the custom actions and events supported in Outbound Contact for SCXML treatments.

OverviewDesign and Configuration Task Summary
This page was last edited on July 17, 2020, at 16:12.
blog comments powered by Disqus