The following option affect how the engaging call is dialed:

OCS controls when and how do bridge the engaging and customer calls. As the default method, when a customer call is connected and call-progress analysis is completed, OCS attempts to find an established engaging call on the same Media Server as the customer call and responds as follows:

For the transfer method, OCS attempts to find an established engaging call on the same Media Server as the customer call and responds as follows: 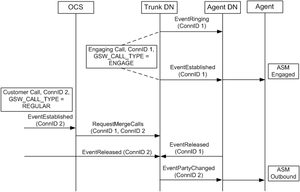 VoIP Dialing ModesOutbound-VoIP in Transfer Modes
This page was last edited on June 1, 2020, at 16:57.
blog comments powered by Disqus