GVP and the Voice Platform Solution

GVP provides a unified communication layer within the Genesys suite, and offers a robust solution that incorporates all required call control including computer-telephony integration (CTI) and media-related functions.

The figure below depicts the GVP architecture and the communication channels among GVP components in the VPS. 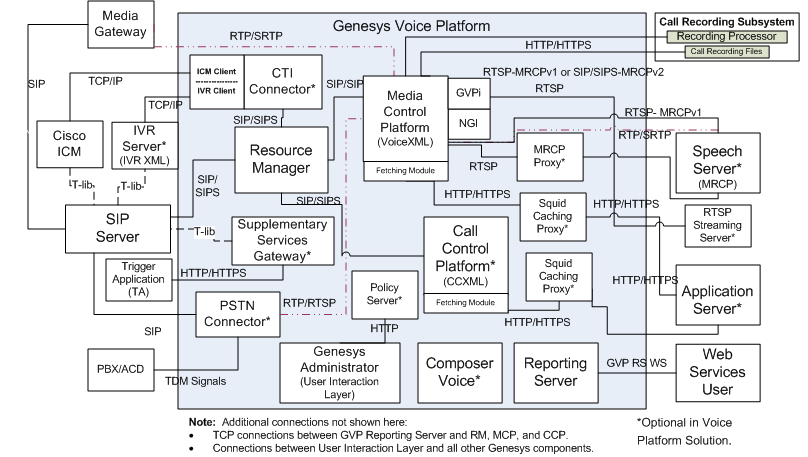 For more information about the VPS, see the Voice Platform Solution 8.1 Integration Guide.

There is an installation package (IP) for each of these GVP components. Each component is configured as an Application object in Genesys Management Framework. The Fetching Module was integrated with the Media Control Platform IP in release 8.1.2, and in all subsequent releases is no longer in a separate IP.

The GVP components integrate with other Genesys Suite components to extend the features and functionality of the voice platform, thereby increasing the flexibility of your deployment.

Unlike other T-Servers, SIP Server operates in environments where there are no switches present. It supports direct interfaces and connectivity to IP agents, voice platforms, gateways, soft switches, and other elements that are used to establish inbound and outbound communication sessions with customers.

SIP Server acts as a SIP B2BUA, and controls the flow of SIP requests and responses between SIP endpoints, performing the switching functions that are normally performed by the PBX or ACD.

SIP Server can be used in conjunction with an IP PBX or ACD. When used in this way, SIP Server controls the routing and transformation of requests, but does not act as a registrar with which agents communicate. This type of control is normally provided by a CTI link.

For more information about SIP Server and integration with GVP, see the VP Solution 8.1 Integration Guide.

GVP is fully integrated into Genesys Management Framework. The GVP component processes are configured as Application objects in the Genesys Configuration Layer, the GVP Application and IVR Profile objects are stored in the Configuration Database, and Configuration Manager is required for bulk provisioning of DNs and Places.

The GVP components interface with Management Framework to obtain the configuration information they need to communicate with other GVP components:

The User Interaction Layer of Management Framework is the unified Web-based interface that controls applications and solutions. It acts as a manager and administrator for all Genesys components, including GVP components. It provides an interface to the Configuration and Management layers and to otherGenesys solutions.

Genesys Administrator is the Web-based GUI that is used to manage all Genesys products, including GVP, with a single user interface. It is part of the Management Framework User Interaction Layer.

Use Genesys Administrator to access the following functions within the User Interaction Layer:

It also provides multi-site reporting statistics aggregating reports from multiple independent Reporting Servers, and allowing an administrator to view data that is aggregated across multiple sites.

To access Genesys Administrator for your deployment, go to the following URL:

Genesys Composer is a voice application development tool that is used to develop VoiceXML and CCXML applications. Composer is the preferred tool for customers who write their own applications, but you can use any tool you choose Composer is optional in the VPS.

The Composer GUI enables you to build voice and call-control applications by using drag-and-drop operations.

The integrated Composer development environment simplifies the creation of voice applications. Developers use the Composer authoring tool to build voice applications from a visual call flow editor or a rich XML editor. Applications are compiled and deployed directly to a web application server, and are thenfetched and executed by GVP.

Composer includes a run-time tool that debugs VoiceXML applications in real time, while the developer performs testing by using a SIP phone.

Tip
The runtime debugger, and the code that is created with it, work only with the NGI.

SIP Server and Genesys Management Framework, including the User Interaction Layer, are required to create an overall VPS solution.

In addition to the Squid Caching Proxy described on page 47, GVP either requires or optionally supports the use of additional third-party software in the VPS.

This section describes the following third-party software that is used in conjunction with GVP:

GVP uses MRCP speech-recognition technology to incorporate automatic speech recognition for use in voice applications. Using ASR in a GVP deployment is optional.

Using TTS in a GVP deployment is optional.

Communication between the web server and GVP is analogous to the desktop web browser model. In a standard Web-based application, desktop browsers make requests to an application server to provide HTML so that they can render the Web-based application. The browser renders a web page, and establishes linksto other pages on the Web. When you click a link, the browser issues a request to the designated URL, which results in the retrieval and rendering of another web page. When the page or its contents change, the next request from any browser retrieves the changed page.

Requests and information exchanged on GVP are handled in a similar fashion, but the markup languages are CCXML and VoiceXML instead of HTML. The HTTP Client requests pages from web servers.

Call-control and voice applications can be developed by using Active Server Pages (ASP) or Java Server Pages (JSP), manually by using CCXML and VoiceXML(rather than being generated by the ASP or JSP pages), or by using Genesys Composer.

The VPS is a complex solution that requires GVP to handle various types of communications.

Tip
The GVP components support IPv6 communications with compatible devices and networks. For information about how to enable IPv6 support in the GVP component Applications, see "Enabling IPv6 Communication" in "Chapter 3: Configuring Common Features" in the GVP 8.5 User's Guide.

The GVP components ship with a generic private key and SSL certificate, and default SIP transports for TLS are configured in the Application object for each component. Therefore, basic security is implemented without having to configure it. However, for more stringent security, Genesys recommends that you obtain your own SSL keys and certificates.

For more information about obtaining SSL keys and certificates, and configuring the GVP components to use SIPS, HTTPS, and SRTP in the GVP deployment, see the section about enabling secure communications in the GVP 8.5 User's Guide.

Before you implement widespread use of HTTPS in your GVP deployment, consider the following:

GVP components support IPv6 communications with compatible devices and networks. The dual-stack functionality supports scenarios where one call leg is onIPv4 and the other, IPv6.

Notes: While GVP 8.1.5 is IPv6 ready, other Genesys and third party interfaces are not. Investing in GVP assures that as vendors and other Genesys products adopt IPv6, GVP is ready. In addition, GVP 8.1.5 is dual-mode enabled, so it preserves compatibility with existing supported interfaces that use IPv4 only.

GVP components support non-linked-local IPv6 addresses only. When using IPv6, do not use linked-local addresses.

Users can configure a TCP or TLS local port range by using the sip.tcp.portrange and sip.tls.portrange configuration parameters, respectively. This parameter can be configured in all four Resource Manager service configuration sections: monitor, proxy, registrar, subscription.

These port range configuration option values are empty, by default. If they are not configured, the operating system selects the local port.

The Supplementary Services Gateway sends the ip-version parameter as a transport parameter to T-Lib and is required to define the preferred protocol version in the DNS of the SIP Server.

If you are planning to use IPv6 in your environment, you must configure the GVP components accordingly. For information about how to enable IPv6 support in the component Applications, see Chapter 3 in the GVP 8.5 User's Guide.

The traps are defined in the GVP Management Information Bases (MIBs), which are available in their own installation package. For more information about the GVP MIBs, see the GVP 8.5 SNMP MIB Reference.