Each option has conditions and limitations.

SIP Server can act as a load balancer and can serve SIP calls to the both RM active instances of RM HA pair.

The following figure shows a sample deployment with SIP Server acting as the load balancer distributing the call load to the Resource Manager active-active pair.

A few notes on the deployment:

Use of Active SIP Server Pairs

Important
Genesys does not recommend this HA solution for deployments that require the use of URS routing strategies. If routing is required, Genesys recommends using the load balancer with active-backup detection, so that SIP Server can be deployed as an active-backup HA pair.

Use of Active-Active Clusters for Resource Manager

Resource Manager can be deployed as an active-active cluster, where both instances run together as the active instance, each with a unique IP address. The active pair then synchronizes active session information, so that both instances can correctly route incoming requests.

The next figure shows a sample deployment with an external load balancer, using the following assumptions: 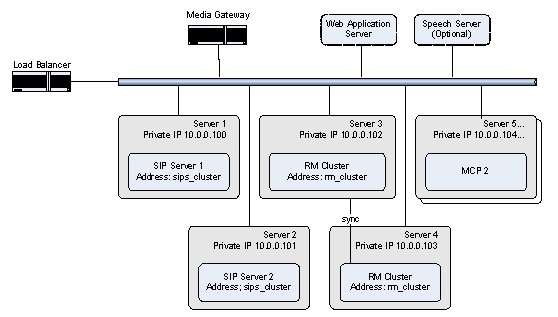 For more information, refer to the section Integrating GVP with SIP Server for an Active-Active Resource Manager Configuration.

With this HA solution, multiple hosts share the same virtual IP address, with only one instance actively receiving network traffic. A switchover from active to backup instances in the HA pair can occur with no apparent change in IP address, as far as the SIP dialog is concerned.

The following task table outlines the basic steps required for an HA deployment on Windows, with the following assumptions:

GVP 9.0 supports HA for Resource Manager on both Windows and Linux operating systems.

Windows Network Load Balancing (NLB) provides HA for the Resource Manager. You can configure two Resource Managers to run as hot standby, or warm active standby pairs that have a common virtual IP.

NLB also provides scalability, because adding Resource Manager hosts to a cluster increases the management capabilities and computing power of the Resource Manager function in the GVP deployment.

Multiple clusters of Resource Manager instances that operate largely independently of one another can be deployed to support large-scale deployments, such as those that involve multiple sites. Each Resource Manager cluster manages its own pool of resources.

Tip
GVP 9.0 does not support more than two Resource Managers in a cluster.

There are two ways to achieve HA for Resource Manager on Linux: by using Simple Virtual IP failover or Bonding Driver failover.

When the Bonding Driver failover option is used, two or more network cards are required for the same server and the bonding driver controls the active standby capabilities for the network interfaces.

You can set up your HA Resource Manager environment in one of the three ways, depending on the Windows or Linux OS version:

GVP 9.0 supports HA for Reporting Server by using a primary/backup paradigm and an Active MQ message store in one of two solutions Segregated Storage or Shared Storage.

When the Segregated Solution is used, the backup and primary Reporting Servers are configured in Genesys Administrator.

When the Microsoft Cluster Service (MSCS) is used, two distinct Reporting Servers access a single shared drive. Switch-over to the backup server occurs when the primary server goes down. After the MSCS is configured, the administrative user interface can be used to manage the primary and backup Reporting Servers.