Starting with release 9.0.001.06, in new Advisors installations, all base objects to which the Advisors user has access appear as already assigned to a default Advisors hierarchy; the CCAdv dashboard starts showing the metadata and the real-time data when you start the application for the first time. Previously, all base objects appeared as available for the rollup configuration and the dashboard remained empty until you added a rollup configuration.

The anchor applications are not exposed on the dashboard. They are present in the administration module only to allow manual adjustments in the agent group configuration.

Important
In the default configuration, agent groups are not mapped to any individual applications that originate from the Genesys contact center system; therefore, the application metrics derived from agent groups and agent counters are only visible on the Contact Centers pane.

Turning the Automated Rollup Configuration On and Off

You can turn off and turn on the Contact Center Advisor default rollup configuration mode at any time. If you turn it off before the CCAdv Server (xmlgenerator application) starts for the first time, then no default rollup configuration is added. If turned off after the first CCAdv Server (xmlgenerator application) start, then all base objects that are added to the Configuration Server later are not appended automatically to the Contact Center Advisor default rollup, while the existing rollup is preserved, unless later removed.

The whole rollup configuration can be removed by executing the spblkRemoveConfigCCAdv stored procedure in the Platform database, as shown in the following examples:

The Contact Center Advisor default rollup configuration is performed using the hierarchy object names, hierarchy object combinations, and name patterns that exist in the QUICK_START_CONFIG Platform table. The contents of this table, plus the sequence, define the object mapping rules. Every new base object, such as an ACD queue, virtual queue, DN group, calling list, or interaction queue, that is added to the Configuration Server is automatically added to the Contact Center Advisor rollup during runtime as long as the default rollup configuration mode is turned on.

The following figure shows the default contents of the QUICK_START_CONFIG table:

In the QUICK_START_CONFIG table, you can:

Important
When you edit content in the QUICK_START_CONFIG table, each of the four columns that contain hierarchy objects must have content. None can be empty.

Mapping is done based on the sequence that is defined in the CSEQUENCE column. Once configured, an application is not included in any further pattern matching. For example, let's say that the virtual queue VQ_PI_RET_Callbacks matches the pattern in row 20 and in row 80. VQ_PI_RET_Callbacks is mapped to the aggregation combination defined in the row with CSEQUENCE=20 and is therefore ignored when the mapping algorithm reaches the row that corresponds to CSEQUENCE=80.

When there is no pattern in a cell, the matching algorithm works like this:

If there is no pattern in any cell, then all applications that are not yet configured are mapped to the corresponding aggregation combination. In the default QUICK_START_CONFIG table shown above, row 90 triggers the mapping of all remaining objects that were not matched by any preceding pattern and to which the Configuration Server user has access. All objects that are not part of the CCAdv rollup by the time that row 90 is processed are mapped to the aggregation combination in row 90. The pattern in row 90 is the last matching pattern processed by the matching algorithm.

There is no pattern for Tenant. If the Advisors Configuration Server user has access to the base objects under multiple tenants, then the objects from all tenants are mapped if they match a certain pattern. In the Advisors default rollup, objects that come from different tenants but have the same name are presented as different applications.

While editing the matching patterns, note that the object type patterns are matched using the internal object type codes rather than the form of external presentation:

The following table shows examples of using the wildcards:

In the Advisors default configuration, matching is case insensitive (case is not recognized). In other words, entering "A" or "a" gives the same matching result.

When you add wildcards to values in the CALL_CENTER_NAME, GEO_REGION_NAME, APP_GROUP_NAME, REP_REGION_NAME, or OP_UNIT_NAME columns, then they are not recognized as wildcards; instead, they become part of the aggregation object name.

Effects of Editing the QUICK_START_CONFIG Table

To make new hierarchy objects visible on the dashboard, you must add any new hierarchy object names, default or customized, to the corresponding Configuration Server business attribute folders. Use the Advisors migration wizard to append the business attribute data. The following two figures show the appropriate selections on the migration wizard: 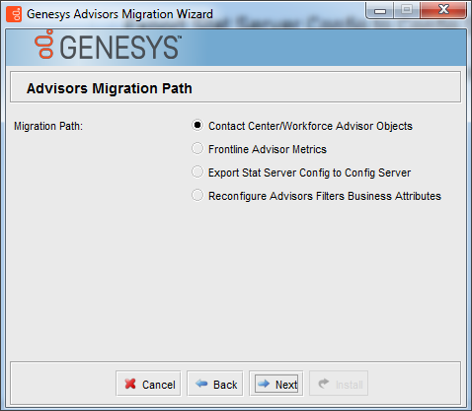 The Metrics box is not checked in the following figure, however, if you have an installation with a new Configuration Server, then be sure to check the Metrics box on the Migration Options screen of the wizard. The wizard adds all of the necessary Advisors folders and related content in the correct form. 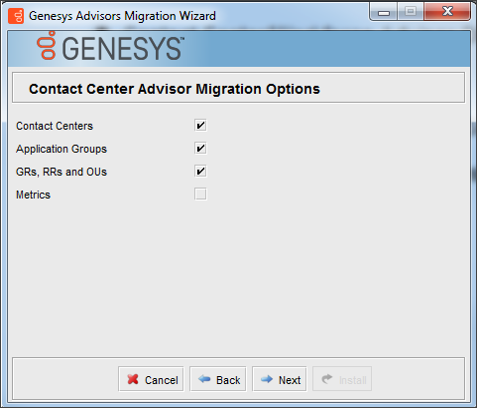