In data warehousing terminology, a measure is an estimation of the magnitude of an Template loop detected: Template:Glossaryterm. For example, a measure might represent the duration of a call, or the number of agents logged in at a given moment.

A dimensional modeling technique that presummarizes detailed facts; also, a function of transforming data into statistics. Aggregation typically involves time-based data selection, additional filtering that is based on a specified combination of attributes, and calculation itself. Aggregation is used to enhance query performance.

In a Star Schema, one large central table that typically contains one or more numerical measures or facts, such as Calls Handled, Total Time on Inbound, Dollars Sold, and so on.
A database table that consists of the measurements, metrics, or facts of a business process. It is often located at the center of a star schema, surrounded by dimension tables. Revenue tables often are categorized as fact tables.

Media types that may be processed in your Genesys environment, but which are distinct from voice and Multimedia.

Also known as ICON. A Genesys product that collects and stores detailed data from various sources in a contact center that is empowered by using Genesys software. Downstream reporting systems can access Interaction Concentrator data in near–real time.
Operating on top of Genesys Framework, the product consists of a server application that is called ICON and a database that is called Interaction Database (IDB). The server receives data from data sources such as Configuration Server, T-Server, or particular Genesys solutions; it then stores this data in IDB by using Genesys DB Server.

Also known as ETL. The ETL process consists of all of the steps that are necessary in order to extract data from different locations transform raw operational data into consistent, high-quality business data; and load the data into a data warehouse.

Genesys iWD offers comprehensive reporting, providing management insight into business operation. It provides key indicators of performance both through current-day statistics and on an historical basis. The historical metrics are provided based on aggregates and measures that are populated by scheduled ETL processes, which extract data from the iWD History Node (from release 9.0) and load it into the iWD Data Mart.

iWD monitors the entire lifecycle of tasks, from the moment that they are captured until they are stopped (removed from the system). iWD provides:

It does this by monitoring a number of events, including the following:

Each record is timestamped and stored in the iWD Data Mart, where the data that is collected can be leveraged in third-party reporting applications.

You can build reports by querying the iWD Data Mart by using the reporting tool of your choice. In addition, Genesys offers the Interactive Insights for iWD product, which includes a data universe and nine out-of-the-box reports, built to be used with the iWD Data Mart.

You can also configure CCPulse+ to work with iWD.

The following figure provides a functional overview of iWD’s reporting components. Third-party services can reference iWD statistics from the GTL_STAT table (GTL, for Global Task List) to display data in dashboards or within Genesys CCPulse+. 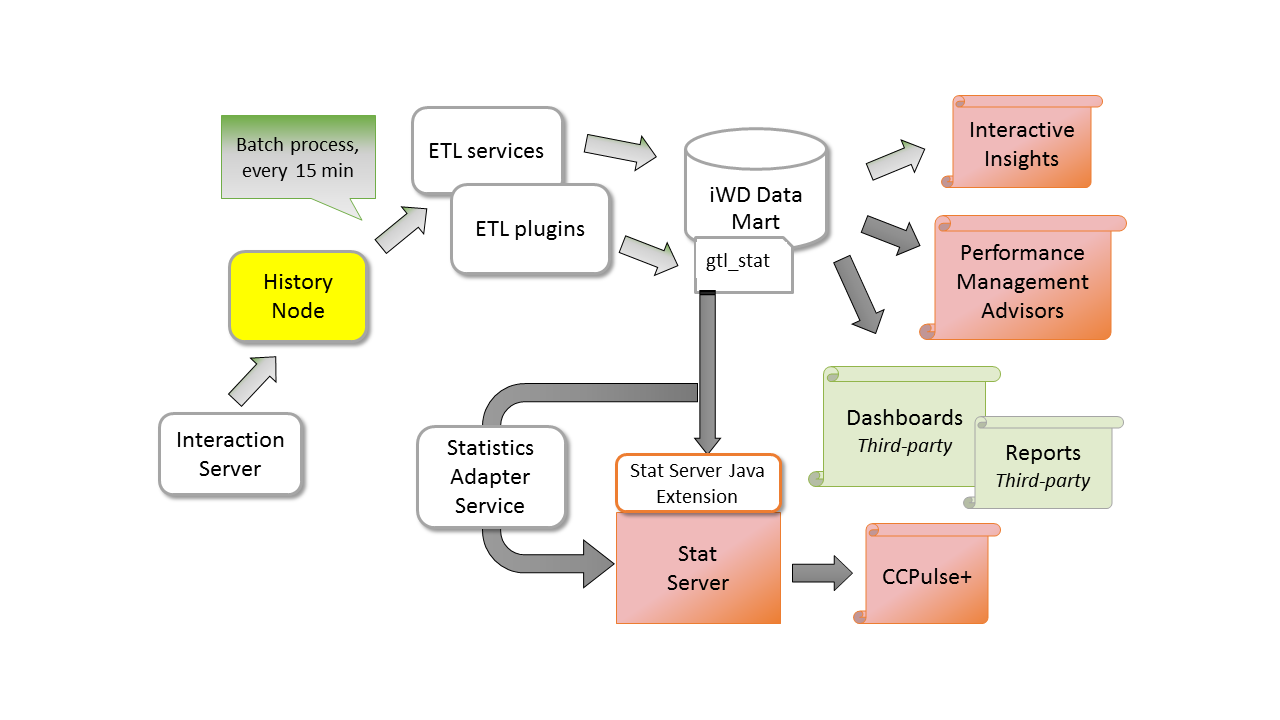 Important
Each iWD solution requires its own Data Mart.

Important
The term agent refers to any resource, configured as a Person object in Configuration Server, that can handle tasks. (Within Genesys Administrator, Person objects appear as User objects within the interface.)

When they are connected to existing enterprise data marts, including Genesys Info Mart, analysts gain access to comprehensive views of the entire customer experience. Analytical reporting leverages existing business intelligence tools, such as those that are provided by (which is an open-source product suite for business intelligence) or through a host of commercial products from Cognos or SAP Crystal Reports.

Refer to the Data Mart Reference Guide for more information.

IWD Task LifecycleIWD Business Process
This page was last edited on May 2, 2019, at 16:02.
Comments or questions about this documentation? Contact us for support!