The figure below shows the main eServices components. 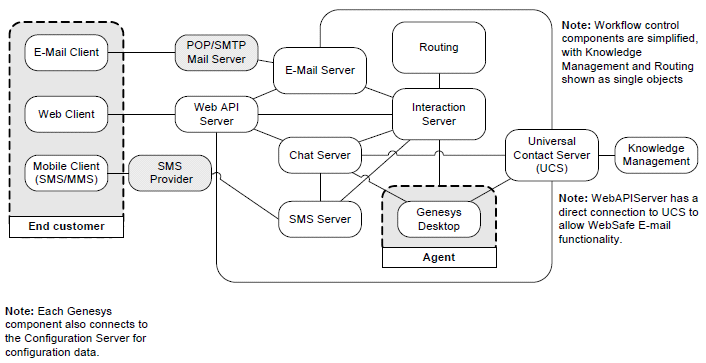 eServices Architecture
Important
For simplicity, not all connections and details are included in the figure. For example, many components (including Web API Server) connect to Stat Server.

Interaction processing generally proceeds according to the type of interaction. The following sections describe how five of the most common interaction types (email, chat, SMS, MMS, and web callback) are processed.

SMS messages arrive when a mobile client sends an SMS message to a phone number of a Contact Center. Genesys SMS Server is a recipient and handler of SMS messages.

Session (chat) mode refers to creating and keeping an interactive conversation between a mobile client and an agent in the form of a conventional chat session. All messages received and sent during this session are associated with one interaction, which corresponds to this SMS session.

This mode supports an interactive conversation between a client and an agent:

MMS messages arrive when a mobile client sends an MMS message to a phone number of a Contact Center. Genesys SMS Server is a recipient and handler of MMS messages. MMS messages can include a subject, text parts, multimedia parts, and a presentation scenario specified in an SMIL (Synchronized Multimedia Integration Language) part of an MMS message. SMS Server supports inbound mode for MMS messages.

Inbound mode refers to receiving an individual MMS message from a movable client and submitting it to Interaction Server as a new interaction.