This topic covers Genesys Predictive Routing architecture, with some additional Genesys components included in the diagrams for completeness. For a full list of required components and versions, refer to System Requirements and Interoperability.

In addition, you need to have adequate data source(s) and construct a well thought-out data pipeline.

The following diagram shows a high-level view GPR, how it connects with other Genesys components, and how non-Genesys data enters GPR.

GPR architecture in a high availability (HA) environment is similar to that presented in the diagram except for the following details:

The following diagram shows the AI Core Services (AICS) internal structure and high-level connections to the other GPR components in a single-server deployment. 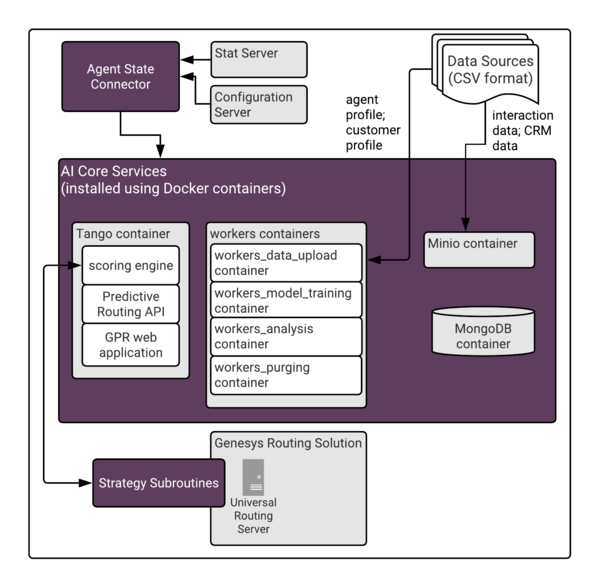 Contains the Genesys platform that provides the GPR scoring engine, the Predictive Routing REST API, and the web-based user interface.

Important
In earlier releases, the Tango container included the workers listed below. The functionality they provide has not changed. They have been relocated to separate containers to facilitate scaling of specific functional aspects.

Contains MinIO, which is a high performance, distributed object storage server, designed for large-scale data infrastructure. This container is available in releases 9.0.013.01 and higher, where it improves processing times for the initial Dataset upload. In release 9.0.015.03 and higher, this functionality has been expanded to include Agent Profile and Customer Profile uploads as well.

AICS handles data uploads without any need for you to handle configuration of MinIO. However, if you are interested in more detailed information about this component, see the MinIO web site and documentation.

A highly scalable, highly available no-SQL database which is especially efficient at handling large batches of JSON format data. It also supports fast, efficient queries of that data. Starting in MongoDB 3.2, WiredTiger is the default storage engine for MongoDB.

Agent State Connector (ASC) connects to Configuration Server Proxy for agent-related data to be stored in the Agent Profile (agent configuration details, such as a location, languages, skills and skill levels, and so on). You can use this connection to populate the entire Agent Profile or you can upload the initial agent data from a CSV file. In either case, agent data is updated via the connection to Configuration Server. See Configuring Agent Profiles in the Predictive Routing Help for additional information and procedures.

ASC is a Java application that can be monitored, started, and stopped in Solution Control Interface. It supports a warm-standby high availability architecture. Certain architectural details about ASC depend on the release you have deployed:

The Subroutines invoke Predictive Routing in real time. They send a request to AICS, which performs the scoring based on the information you configured in your Predictor and the Model or Models based on it. AICS returns the projected scores for each agent in the target group, indicating how well they would be expected to handle the specific interaction in question given the particular interaction type, customer intent, agent skill level, and whatever other factors you anticipate to be relevant. URS then chooses the optimal routing target.

AI Core Services and Agent State Connector 9.0.015.05 and higher are delivered as a set of Docker images. This ensures consistent environments from development to production as Docker containers maintain all configurations and dependencies internally, without depending on software installed on host server. With Docker, upgrades are easier and more predictable. Scaling across multiple hosts requires starting the same Docker containers on multiple host servers. In addition, Docker provides isolation; every part of GPR can be scaled separately and has guaranteed access to hardware resources.

Genesys uses the following best practices when it comes to security:

To understand how Docker containers comply with various security regulations and best practices, see the following pages on the Docker site:

To understand how MongoDB databases comply with various security regulations and best practices, see the following page on the MongoDB site:

The following protocols are supported for the specified connections:

Configure GPR to Use HTTPS

GPR supports HTTPS by default. The procedures linked below provide the required configuration to use HTTPS with GPR.

HTTPS configuration for other components in your Genesys environment is covered in the Genesys Security Deployment Guide and in the product-specific documentation.

System Requirements and InteroperabilitySizing Guide
This page was last edited on August 19, 2019, at 16:24.
blog comments powered by Disqus