Contact center agents routinely work with applications that are separate from traditional CRM (Customer Relationship Management) or agent desktop applications. Genesys Open Media allows you to create custom media types that integrate this agent activity into the contact center workflow.
To use open media, you will need to define new interaction types in the Configuration Layer. After you do this, you can use the Media Interaction SDK to build client and server applications that manage them within the Genesys platform. Finally, you will use the Agent Interaction SDK to allow agents to process these interactions.
This section will provide an overview of the kinds of situations that lead application developers to use open media interactions. It will then outline some of the things you can do with open media using the Agent Interaction (Java API). Finally, it will give more in-depth descriptions of a couple of real-world open media use cases.

There are many occasions when contact center agents could carry out work they do not normally do. Open media makes this a lot more productive than it would otherwise be.
For example, in the wake of a natural disaster, insurance companies tend to get high call volumes as people file their claims. At this point, you might want to have claims adjusters and others available to expand the contact center workforce.

Another common scenario is for contact center agents to handle faxed requests when they are idle. In this case, you could set up an interaction type that includes the fax data for the agent to process. When the interaction is routed to the agent’s desktop, the agent can process the data as appropriate and mark the item as done.

There are several ways you could use open media in these situations. In the simplest cases, you might want to use open media interactions merely to route work to an agent. But in some cases, it might be even better to process information directly in the agent desktop, using the open media functionality of the Agent Interaction SDK. There will be an example of each of these scenarios later in this section, but first, here is a look at some of the things you can do with open media.

Agent Interaction SDK makes it possible for you to perform actions like the following on open media interactions:

Routing Rejected Orders to an Agent

This example will show how you might use open media interactions simply as a routing mechanism, while having an agent continue to work in an application that is separate from his or her desktop.
Agents for a telephone company might use many applications, including an order management application. When a customer calls in to order DSL (a form of high-speed Internet service), an agent must enter the customer information and submit the order. If the agent makes a mistake on the order form, the system will reject the order and send it back to the agent for correction.

Because the order management system is not linked to the contact routing platform, the incorrect order will sit at the agent's desktop—perhaps for hours—until there is a lull in inbound activity that will allow the agent to address the problem.

With the addition of Genesys Open Media, the scenario is different.

If the agent makes a mistake on an order, the rejected order can be submitted to the Genesys platform as a new activity to be queued and sent back to the agent. Depending on the priority that you set, the agent may be taken off the phone queue immediately and routed back to the order to make corrections.

Here is how you could use Genesys Open Media to create this kind of solution:

When an order is rejected, the order entry system will send information about the order to the new Media Interaction SDK application, which will create a new interaction of type DSLOrder. The interaction will be sent to the Genesys servers for processing and they will route the interaction to the appropriate agent, as shown below. When the agent has corrected the order, he or she will mark the interaction as done.

Alerting an Agent to Process a Rejected DSL Order

See SimpleOpenMediaInteraction for a code example that shows how to write an agent desktop application that can mark an open media interaction as done.

Working on a CRM Case

Sometimes it is not enough to use open media as a routing and notification mechanism. There are many cases where it makes more sense to write detailed interaction-handling functionality directly into the agent desktop.

For example, you can use open media interactions to allow contact center agents to handle incoming fax data for use by a Customer Relationship Management system. This could be done in a way that is very similar to the preceding example, but in this case, you might prefer that the interactions you create would also carry data for the agent to process right in his or her agent desktop application.

As in the example above, you would need to define a new interaction type, perhaps called CRMCase. You would also need to set up the appropriate routing and write an application that uses the Media Interaction SDK. This application would attach CRM data to the CRMCase interaction.

But the Agent Interaction SDK functionality you write would be a bit different, as it would do more than just mark the interaction Done. Here is the process the interaction would follow, as shown in Handling a CRM Case Using Open Media: 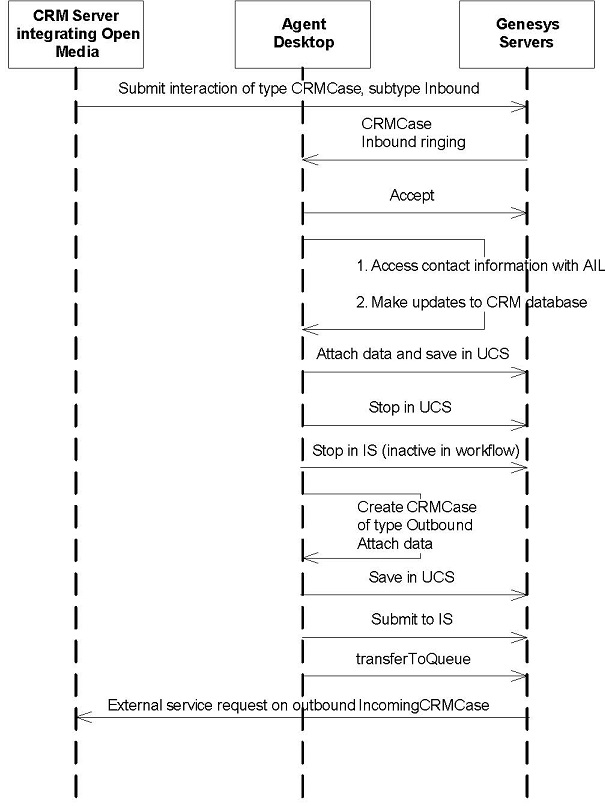 This example extends SimplePlace and is very similar to SimpleEmailInteraction, which was explained earlier in this chapter.

When you launch the application, there is a panel with two buttons: Accept and Done, as shown below. These buttons will let the agent accept an open media interaction and mark it done, respectively. When the agent accepts the interaction, information about it will be displayed in the GUI. 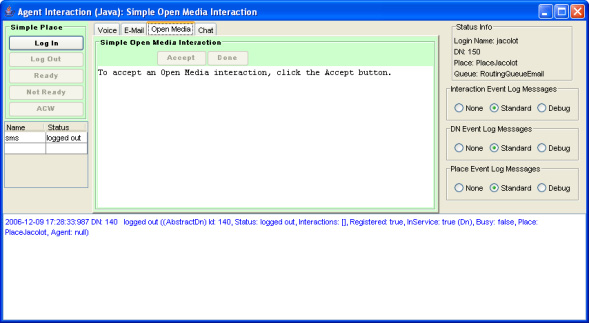 Here are the steps you must take to create this application. As before, the steps that have already been done by SimplePlace will not be discussed here.

The linkWidgetsToGui() method is very similar to corresponding methods discussed earlier in this chapter. The two buttons are also very simple. Here is the action code for the Accept button, which is just like the Accept button for SimpleEmailInteraction:

Note that the markDone() method tells both Interaction Server and Universal Contact Server to stop processing the interaction.

These two sections of code are almost all that is new in this section of the example. Since the setInteractionWidgetState() code—used to synchronize the user interface—is very similar to what you have seen in previous examples, the only other thing to do is set up the event-handling code, which is also fairly simple.

This example uses event-handling code that is largely similar to what you saw in SimpleVoiceInteraction.

As in SimpleVoiceInteraction, you check for a status of TALKING and for the correct media type. Then you read in the information and display it in the GUI: