If a customer requests a callback, the Voice Callback server records the request. Interaction SDK (Java) supports Web Callback, that is, the customer can request a callback from a web application.

At the time that the customer requested (As Soon As Possible, or some specific calendar day/time), the Voice Callback server inserts a record of the request into an appropriate queue. From the queue, the Voice Callback request is sent to the place of an available, appropriate agent. When the AIL library receives the request, it creates a CallbackRecord for the request, creates a new accompanying Interaction (which may be cast as InteractionVoice) on the place, and sends appropriate event objects to registered listeners.

As the phone call progresses, the library updates the Interaction’s status.
The completion of the phone-call attempt may have various outcomes, including successful interaction with the customer, or busy, or connection to an answering machine or fax machine, and so on.
Upon completion of the attempted call, the application lets the agent signal the AIL library that the CallbackRecord is processed, and the CallbackRecord status is updated. (When the Interaction is closed and marked done, the library also closes the associated CallbackRecord.)

If the agent rejects the task, the Voice Callback request remains at the top of the queue to be sent to some other agent’s place.

To access callback information, you deal with the CallbackService instance of the current Place in use. With CallbackService methods, you can access to CallbackRecord objects for this Place.

Each CallbackRecord instance enables you to register listeners for getting callback events and contains record data that you use to callback the customer.
To determine which callback record is associated with an interaction, you call the CallbackService.getCallbackRecord(Interaction) method. 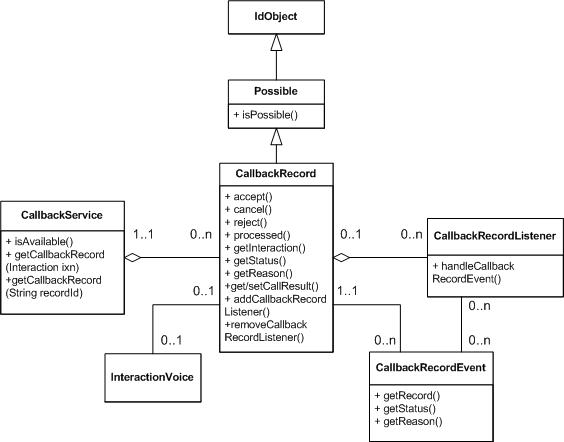 To access callback features, your application gets the CallbackService interface associated with the place. Your application receives InteractionEvent events for voice interactions in different statuses, depending on the mode of the callback server.

In predictive mode, the application gets the CallbackRecord in OPEN status and the InteractionVoice object is already in a DIALING status. For further details about callback servers’ modes, refer to the Voice Callback 7 documentation.

Steps for Writing a Callback Application

Now that you have been introduced to the callback feature’s design, it is time to outline the steps you will need to work with its events and objects.

There are five basic things you will need to do in your AIL applications:

This page was last edited on January 7, 2014, at 15:35.
Comments or questions about this documentation? Contact us for support!