This example is similar to SimpleVoiceInteraction, which was introduced earlier. It uses the same graphical user interface and the same internal structure, inheriting from SimplePlace.

Important
For the sake of simplicity, this example is designed to handle one e-mail at a time. Set up a capacity rule limiting the agent to a single e-mail at a time in your routing strategy. For further details, see Universal Routing 7.6 Documentation.

When an e-mail arrives for this agent, the Accept button will be enabled. At this point, the agent can accept the e-mail. This displays the text of the incoming e-mail, and also enables the Reply button, as shown in Accepting an E-Mail. 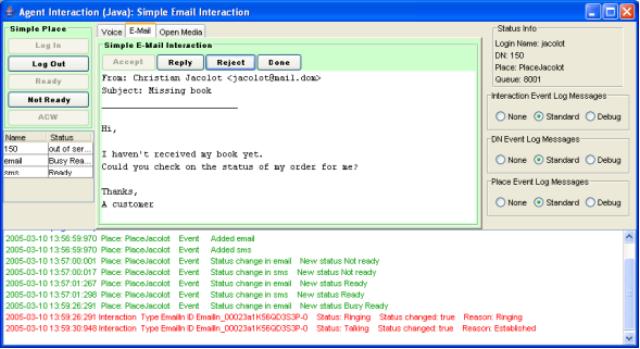 If the agent clicks the Reply button, a new window is created for the agent to type and send a response, as shown in The E-Mail Reply Window. 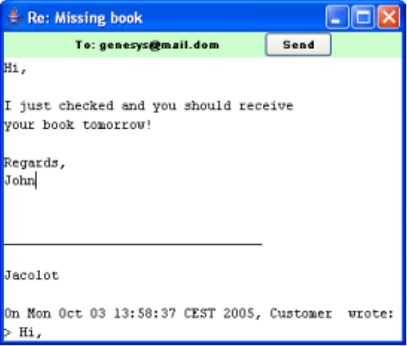 After the agent sends the e-mail, the processing of the inbound e-mail is finished and the example releases all the associated interactions.
As in the SimplePlace and SimpleVoiceInteraction examples, there are only six steps to follow in writing this application. As some of these steps have been done by SimplePlace, which is the superclass for this example, they will not be repeated here.

After calling the superclass method and setting up the tab, the linkWidgetsToGui() method is ready to set up the buttons. The Accept button is very simple. All it does is “answer the call” when an e-mail comes in:

This changes the status of the incoming e-mail from RINGING to TALKING.
The Reply button issues a call to the createReply() method of SimpleEmailInteraction. This method first creates an outbound reply e-mail:

Then it makes call to an agentInteractionGui method, as shown here:

This method creates a new window allowing the agent to enter a reply to the incoming e-mail in the widget and include a Send button. As for thelinkWidgetsToGui() method, the createReply() method links widgets for managing the sending of the e-mail response.

When the agent has finished the reply, he or she can click the Send button in the reply window, which will do several things, as described here.
First, you will need to get the name of a queue. This is because you are about to send an e-mail interaction, and e-mail interactions must have a queue to go into. After getting a queue name, which will be explained in a moment, you must set the text of the outgoing e-mail based on the text entered by the agent:

Finally, you can send the response and close the reply window.

As mentioned above, you must supply a queue for the outgoing e-mail. There are several ways to do this. In this example, the available queues are read in and the first one is chosen, as shown in the next stretch of code. You may need to use more sophisticated means to perform this task.

That is a lot more work that you had to do in the previous examples, but there is not much left to do now.

The handleInteractionEvent() method in this example is different from the corresponding method in SimpleVoiceInteraction. The significant difference is in how it processes two different types of e-mail interactions: sampleEmailIn for an incoming e-mail and sampleEmailReply for the response.

When an e-mail comes in, it will have a status of RINGING. At this point, if the sampleEmailIn interaction associated with the example is null, the example gets the event’s e-mail interaction and displays a few details in the GUI, as shown here:

At this point, if the received event provides notification of a change of status for the sampleEmailIn interaction, the handleInteractionEvent() method checks for two cases:

Then, the event can also provide notification of a change of status for the sampleEmailReply interaction. In this case, the method checks whether or not this e-mail is released. If true, this interaction and its widgets are removed from the example, as shown here.

As said previously, the standalone code examples use two similar methods to synchronize their user interface widgets with the application state: setPlaceWidgetState() and setInteractionWidgetState() .
SimpleEmailInteraction overwrites both methods:

As you can see, the work you do to reply to an e-mail is not that different from what you do to handle a call. The following sections go into more detail about e-mail interactions.

To access e-mail interactions, an agent must log into the e-mail media of his or her place. Due to consolidation of the interactions, some method names and events applied to the manipulation of e-mail are drawn from telephony terminology.

The e-mail state diagram below, E-Mail State, shows the life cycle of an e-mail interaction (inbound or outbound). The workflow is similar to that of a voice phone call, but without pure voice operations. States are Interaction.Status values and transitions are InteractionEvent.EventReason values. 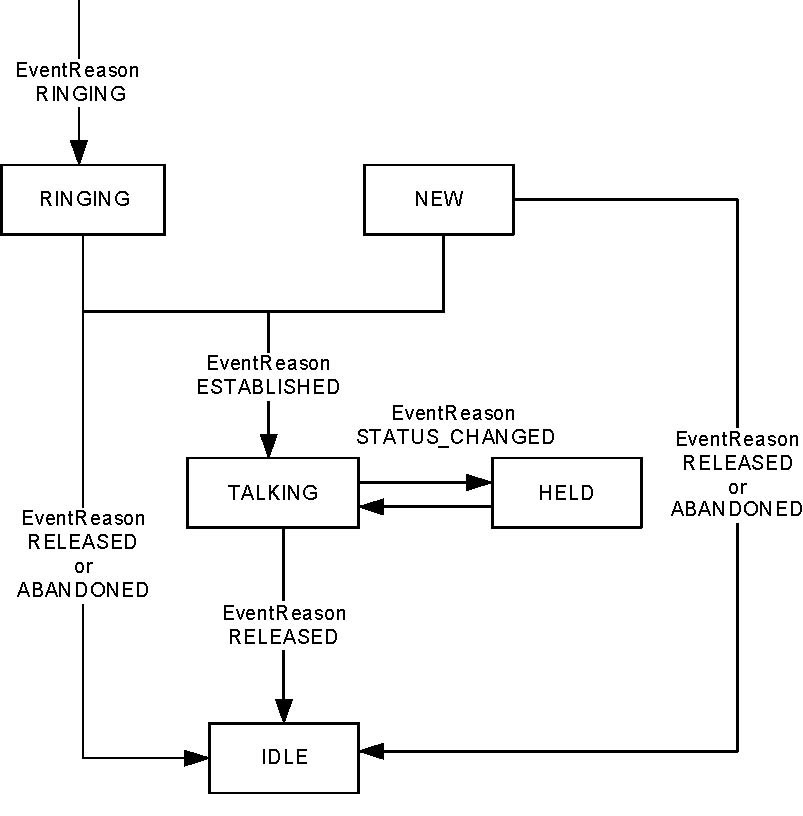 To send an e-mail, create an outgoing e-mail interaction, that is, an InteractionMailOut instance of type Interaction.Type.EMAILOUT.

Then, you immediately receive an InteractionEvent event, setting your interaction to the Interaction.Status.TALKING . You are now ready to fill in the e-mail with the methods of InteractionMailOut .
To set addresses, you must create and fill an EmailAddress object for each e-mail address, as shown here:

Once finished, you call the InteractionMailOut.send() method to send your e-mail to the Genesys servers. 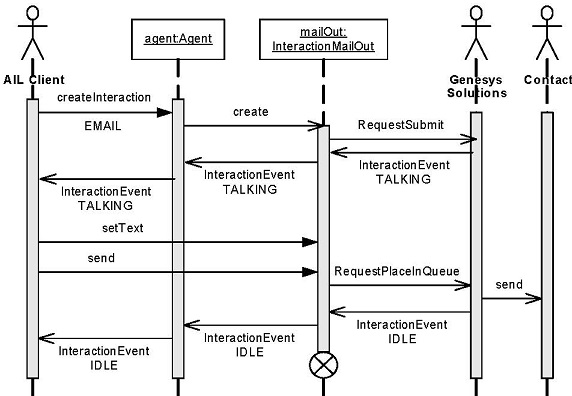 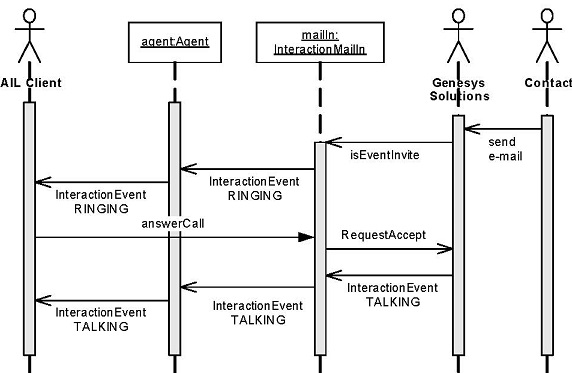 Responding to an E-Mail 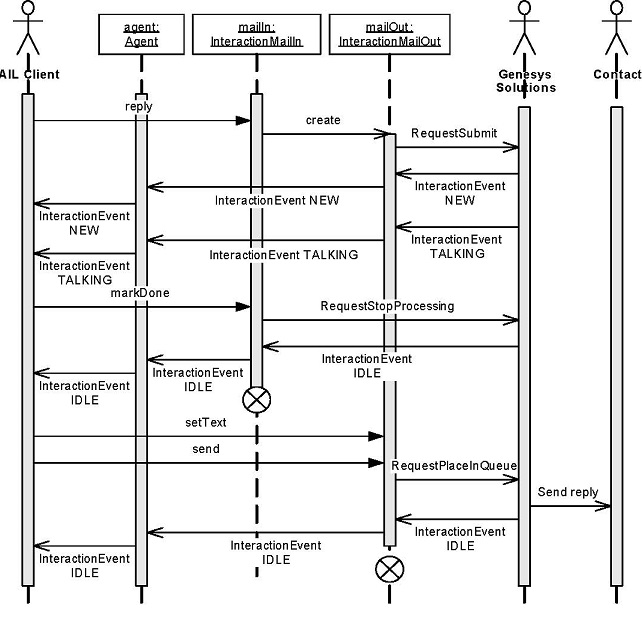 Responding to an E-Mail

Warning
As soon as invitations are sent, the outgoing invitation is no longer available. Nor is it stored in the database. Do not keep any reference on this object.

Invitation interactions are inbound e-mails of type COLLABORATION_INVIT_IN . Depending on your application’s role in the collaboration (child or parent), the application provides you with two interfaces to handle invitations:

The collaborative reply is an outgoing e-mail replying to a child incoming invitation. It is created by calling the InteractionInvitationIn.reply() method. As for an outgoing replying e-mail, some e-mail fields are already filled in and you just have to set new text with theInteractionReplyOut.setMessageText() method.
Use a collaborative reply in the same way that you would use a reply outgoing e-mail interaction. For further details, see Participating in a Collaboration Session.

The following state diagram shows non-exhaustive transitions that exist between collaboration statuses of an incoming invitation. 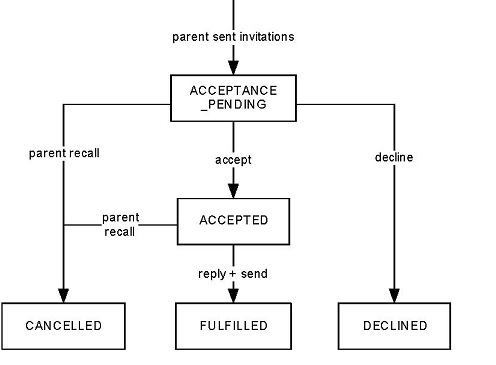 Transitions Between Statuses of an Incoming Invitation

Warning
This figure is provided as an informative example. It does not include all possible statuses and transitions.

First, create a draft of the relevant outgoing e-mail interaction. You need a single InteractionInvitationOut interaction to send invitations to several participants.
Use the InteractionMailOut.createCollaborationInvitation() method as shown in the following code snippet:

You have to specify the reason for this collaboration session. Use setSubject() and setMessageText() to add information.
You must add participants to the collaboration session. First, create each participant with the InteractionInvitationOut.createParticipant() method, then add those participants to the outgoing invitation with the InteractionInvitationOut.addParticipant() method, as shown in the following code snippet:

In push mode, on the child side, each participant receives a RINGING InteractionEvent for the corresponding InteractionInvitationIn . See Participating in a Collaboration Session.

Participating in a Collaboration Session

In push mode, from the participant (or child) point of view, the agent receives an InteractionEvent for a RINGING incoming e-mail interaction of type COLLABORATION_INVIT_IN. See Putting Interactions in Workbins for details about pull mode. The following code snippet implements the handleInterationEvent() method for an AgentListener:

Cast the interaction associated with the event to InteractionInvitationIn, as shown in the following code snippet:

You can manage this incoming interaction as a common e-mail by answering to it. See also Responding to an E-Mail.

If the agent accepts, he or she can reply to the invitation, as shown in the following code snippet:

Workflow management is provided with the WorkbinManager interface and classes of thecom.genesyslab.ail.workflow package.

The WorkbinManager interface accesses the workbins of a place. From an agent’s point of view, a workbin is a sort of interaction directory from which your application can pull, or into which it can put, interactions. 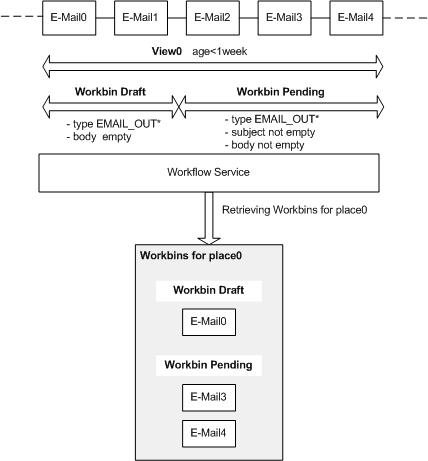 Example for Workbins, Views, and Queues

Here, the WorkbinManager interface retrieves interactions no older than a week and available for place0. E-Mail1 and E-Mail2 are not retrieved, as they should not be processed in place0.

Use the WorkbinManager interface to get Queue and Workbin instances available for the agent. For example, the following code snippet gets the Workbin instance corresponding to Draft (see the diagram example for Workbins, Views, and Queues).

The Workbin interface is designed to manage the contents of a workbin as a set of InteractionMultimediaSummary. It provides the following methods:

The InteractionMultimediaSummary interface is a summary description of an interaction available in a workbin. The corresponding interaction’s status is IDLE. To execute actions on workbin interactions, you first have to pull those interactions. You cannot work with summaries or interactions retrieved from summaries.

The following code snippet displays the contents of the draft workbin for this place.

The Workbin interface has methods to display information about the workbin itself—for instance, its name with getName(), the name of the associated queue with getQueue(), and its type with getType().

You can put an InteractionMultimedia into a workbin by calling the Workbin.put() method, as shown here:

You can cast the workbin according to its type, as shown here:

The InteractionMultimedia interaction is pulled on the agent or the place. Your application receives an InteractionEvent to update the Interaction.Status status which changes from IDLE in the workbin to TALKING once pulled.
Further processing of pulled interactions does not differ from the use cases described in the earlier sections.