This chapter introduces the Agent Interaction Java API, its components, features, and scope of use.

The library core manages connections to Genesys solution components. It is designed to work only with the set of telephone system switches that are described in the Interaction SDK 7.6 Java Deployment Guide.
The core maintains connections to components of the Genesys Framework, Genesys Multimedia, Outbound Contact Solution 7.x, and other Genesys solutions.
The core internally maintains objects used by your applications. These internal objects are not directly available through the API. Rather, the library maintains an AilFactory object, which provides you with access to API objects.

The library API provides access to the features, statuses, and events managed by the library core. It provides a complete set of classes and interfaces to handle data of the underlying Genesys solutions with which you can design your own multimedia application.
The example Java programs that accompany this product illustrate the use of the interfaces for the most commonly used objects and their events (DNs, places, agents, contacts, and so on), as well as interactions for such services as voice and callback.

The Agent Interaction (Java API) enables you to develop applications for the following purposes:

Your application can handle any inbound interaction, regardless of media:

Your application can initiate outbound interactions, regardless of media:

The AIL library offers you two primary modes of deployment or application development:

Refer to the Interaction SDK 7.6 Deployment Guide for configuration information pertinent to these two modes.

The AIL library core is responsible for maintaining connections to servers, maintaining context, managing media, consolidating data, obtaining real-time object information, and providing switch facilities.
The API exposes objects, such as DNs, interactions, and agents, as interfaces that give access to all necessary information. The core manages the objects with respect to state machines that guarantee that the model is coherent with other Genesys components (for example, multimedia solutions) across supported switches. Changes in the object states are available through events. 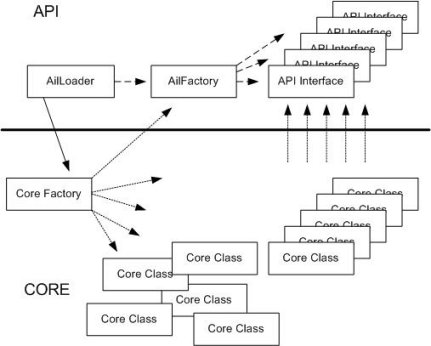 The library provides a reference system of unique object IDs that are standard String objects. Thus, your application manipulates each object by passing its unique ID as a parameter in methods of the AilFactory interface.

The library core is designed around the following features:

The Agent Interaction Layer library is thread-safe and can therefore be run in a multithreaded environment.
On startup, it creates a thread that maintains all Genesys server connections, a thread for processing T-Server requests, a thread for publishing events to the API, and so on. Events from a given T-Server are always forwarded to the API listeners in the same order as they were received from the T-Server.

Usually, communication with the underlying servers is asynchronous. So an acknowledgment or result of a request is returned through the common flow of events sent by a server.
To relieve the developer from managing such asynchronous requests, methods of the API are made synchronous: the server reply is awaited before the requesting method returns.
The API uses exceptions for notification about standard errors, communication errors with the Genesys servers, unavailable actions errors, or status errors.
Moreover, final results of actions are forwarded as events to the registered listeners.
Because the API is synchronized, a request will block the current thread until it returns. For voice applications, the request will block until the request has been completed on the switch or an error occurs.
A request that goes up to the switch or the database might take time. Because this is not what you want in a single-threaded application, you may want to develop a multi-threaded application.
The library implements a timing loop that you can configure in the constructor parameters at the time you create a new AilLoader . This is a defense mechanism to allow application recovery following switch, network, T-Server, or other connection failures.
In the event of a failure, an exception is thrown. See the Javadoc API Reference for details.

The Agent Interaction Layer library can establish a link with a Contact Server and provides a high-level representation of its objects through the interfaces of the API.
Note that when you have a reference on an object, it can be modified by another thread. For example, a T-Server event can change the status of an interaction. If you call the getStatus() method twice on an InteractionVoice, the other party might have released the call in between. Then the first getStatus() method will return TALKING and the second getStatus() method will return IDLE .
The objects Contact and Interaction have a representation in the Contact Server and thus can be saved. They implement the Savable interface that controls the coherence between the objects and the Contact Server.
These objects can be manipulated with their identifiers.
For a client application to directly retrieve an Interaction object from the Contact Server, it can use the getContactServerId() method to get the internal DBID of the Interaction object.

The library core provides the event mechanism, through which your Agent Interaction (Java API) application can notify users about servers’ statuses (notably, the loss of a connection).
The library core can maintain connections to multiple T-Servers.
The library core is designed to work in a single-tenant environment. It is possible to create applications that work in multi-tenant environments, but in this case, Configuration Layer objects that your application uses must be specified in the application’s Tenants tab (in Configuration Manager), and these names must be unique. See the Interaction SDK 7.6 Java Deployment Guide for details.

The Agent Interaction (Java API) connects to the following Genesys servers within the Genesys Framework:

For voice-only mode, your application should connect to the Configuration Layer and to at least one T-Server. For details about supported switches, refer to the Genesys Supported Media Interfaces document.

If you wish to replace the default XML parser with the XML JVM options, you will need the following set of JVM options:

AIL also takes those options into account for its internal needs and always uses the SUN XML parser.

The Agent Interaction (Java API) connects to the Genesys Outbound Solution through the Outbound Campaign Server. This server controls and organizes outbound campaigns.
For outbound campaign handling, your application should connect to, if using voice outbound, to a Configuration Layer, an Outbound Contact Server, a T-Server, and, optionally, UCS. If you are using outbound proactively, you should connect to Interaction Server and at least one T-Server.

The Interaction SDKs are not suited for multi-tenant deployments. Although you can use them for a given tenant in a multi-tenant environment, you would need a separate instance of your application for each tenant using it. (As an alternative, the Genesys Platform SDK supports multi-tenancy.)

This page was last edited on October 6, 2021, at 12:05.
Comments or questions about this documentation? Contact us for support!