Universal Routing improves its capability of calculating the estimated waiting time for a routing target.

When the lvq method is invoked with the aqt parameter, the calculation includes:

Returned values for the lvq method depend on the input parameters supplied. Samples:

The lvq method can be called from a routing strategy with function RequestRouter.

The query method is described in the Universal Routing 8.1 Reference Manual, Appendix C, "Supported Methods." This method can be helpful when the use of virtual queues is not appropriate or not possible for calculating estimated wait time. For example, a virtual queue could include calls that might wait for totally different targets or have different thresholds. This method uses router's queues instead of virtual queues (all calls in router's queues wait for the same targets and have the same thresholds). Internally this method uses URS function RvqData to get aggregation information about all router’s queues where a call resides.

When the query method is invoked, the calculation includes:

This method can be called from a routing strategy with function RequestRouter. 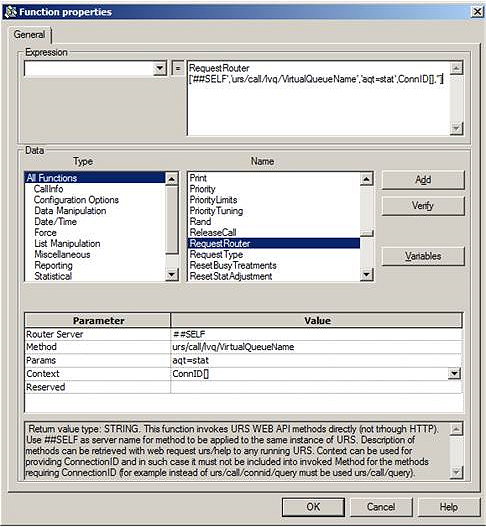 Parameters:
Router Server: Uses ##SELF as the server name for the method to be applied to the same instance of a running URS. Default value: ‘##SELF’.
Method: With IRD release 8.1.400.21, supported methods for use with this function are urs/call/lvq or urs/call/query.
Params: If the method must have, but does not contain parameters, they can be provided separately here.
Context: If the method must have, but does not include an Interaction ID, it can be provided here. Can also be used for providing a ConnectionID, in which case it must not be included into invoked methods requiring ConnectionID. For example, instead of urs/call/connid/query, URS just uses urs/call/query.
Reserved: Not used in IRD release 8.1.400.21.
Return Value Type: STRING

Starting with URS release 8.1.400.25, the InVQWaitTime function is enhanced to no longer require the association of virtual queues with Agent Groups.