An eServices component that is the central interchange for interaction flow and mediates among media servers, routing components, Knowledge Management, and the desktop. For nonvoice interactions, it is the functional equivalent of T-Server. Interaction queues are actually entities in the database (sometimes called the cache) that is associated with Interaction Server.

The Orchestration Platform consists of ORS and Universal Routing Server (URS). The platform works with T-Servers, SIP Server, or Interaction Server quite similarly to the way URS previously worked with these components. In this architecture, requests from these services go to ORS and utilize URS services for routing. A high level architectural diagram is shown below. 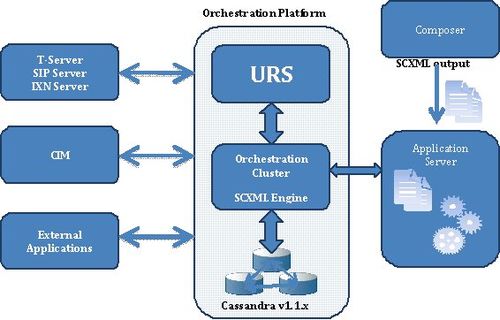 The Orchestration Platform provides persistence of sessions by utilizing Cassandra NoSQL DB, which is packaged and built-in with ORS (see Cassandra in figure above). Cassandra stores information regarding active sessions, as well as scheduled activities.

The figure below shows a sample voice interaction flow that is based on the above architecture diagram. For information on the events shown, see the Genesys Events and Models Reference Manual. 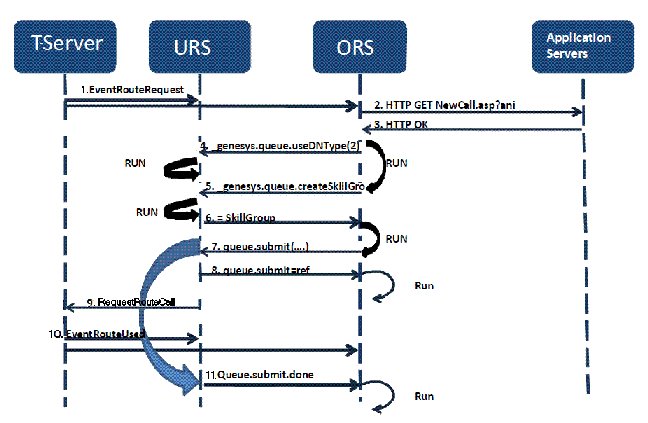 This section provides information on how the Orchestration Platform supports eServices (multimedia) interactions. It also describes key use cases and key functional areas. The figure below shows an eServices-specific architecture diagram for an ORS deployment.

To support processing eServices interactions, the ORS design is based upon the following principles:

Note: All ORS requests with their attributes, including RequestPull can be seen in the Interaction Server log.

Note: Previous versions of ORS required a connection to Persistence Storage (Apache Cassandra), however, ORS 8.1.3 and later do not require this connection in order to operate. 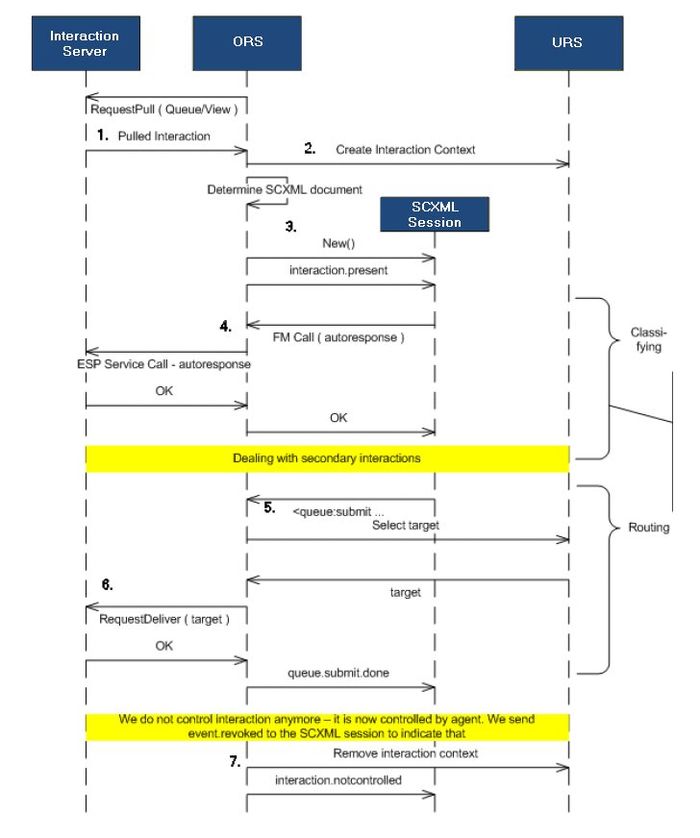 The numbered steps in the preceding figure are identified as follows: 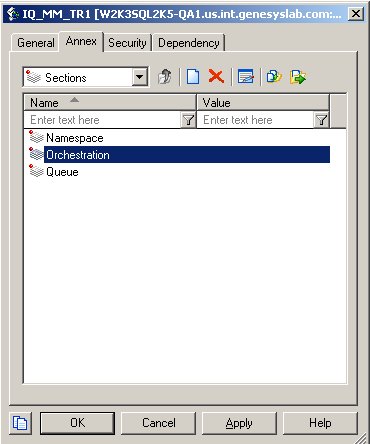 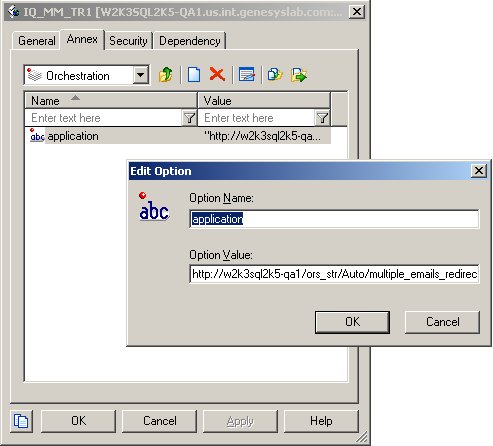 You can also associate an Interaction Queue with ORS by assigning the strategy to a Queue by using Composer. For information about how to assign Queues in Composer, see the Composer 8.1 Routing Applications User’s Guide.

All properly associated (managed) combinations of the Interaction Queues/Views are written to the ORS log at startup.

Multi-site routing within the Orchestration Platform involves the handling of a call across one or more T-Servers (referred to as a site).

This scenario allowed control over the segmentation of routing logic. The call was redirected from strategy to strategy, or from an agent resource back to a Routing Point with an associated strategy, within the various switches.

Within Orchestration, segmentation of the routing logic may be accomplished by combining SCXML documents and controlling the flow programmatically, rather than requiring the movement of interaction to dictate which SCXML document needs to be executed.

Orchestration is able to undertake this by associating an interaction with a controlling SCXML session. Such association between an Interaction and an Orchestration session is created when a call enters the site and executes its first Orchestration SCXML Session. The association is maintained until one of the following is true:

While this type of associated session is active, all interaction events are directed to this owning or controlling session for handling. This allows for the creation of a single SCXML session, which can control the complete interaction handling, encompassing pre-routing and selection of a resource. It also allows control of post-routing once a resource has redirected it to another Routing Point.

This provides valuable benefits, such as streamlining the amount and type of configuration that is required. It also allows for the creation of more obvious interaction and conversation processing-logic, because the interaction can be controlled during periods that are not currently supported by URS/IRD.

The ability to maintain this association might be perceived as providing unexpected behavior for customers who wish to maintain the legacy way of breaking up the routing logic based on Routing Points. Legacy customers may view this as ORS executing SCXML logic that does not result in the creation/execution of a new session because of a pre-existing association with an existing session.

For this reason, in order to maintain equality with existing structures, Orchestration 8.1.2 introduced additional SCXML actions that can be used to help control the association between an interaction and an Orchestration session. This allows customers to recreate the legacy routing logic separated by provisioning, rather than centralized SCXML control logic which results in the handling of the interaction across multiple sessions.

The following SCXML actions provide the application developer with increased control of the association.

When an interaction is not currently associated with any session, the determination of which SCXML document to execute is based on the existing configuration, and allows for similar structures to be created, as presently done within URS/IRD strategies.

The figure below exemplifies an SCXML session (Session 1) that has been executed as a result of a call entering Routing Point 1 (RP1). Upon entry, Session 1 may determine to continue the logic and call handling that it needs to transfer the call to Routing Point 2 (RP2) on Site 2. To accomplish this, a <queue:submit> is performed with route equal to false. Upon success, the interaction is then detached from Session 1 and is then redirected to the destination returned back  from the <queue:submit>, upon success, a new session, Session 2 is started and Session 1 exits. On failure to route to RP2, Session 1 will perform an <attach> to reestablish the association with Session 1 and perform some other processing within the same session. The second session will route the call to a local agent. 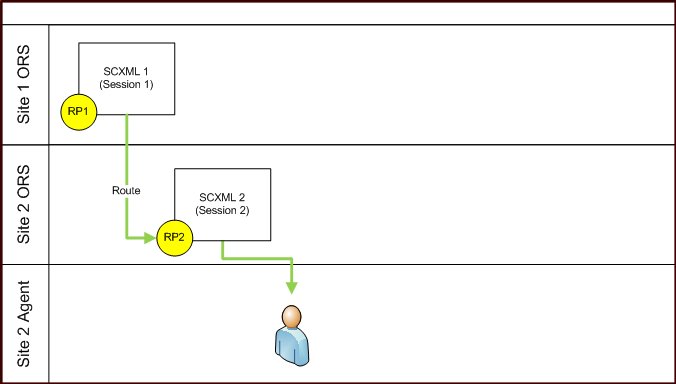 For more information and detailed SCXML samples please refer to the Orchestration Developer’s Guide on the Genesys Documentation website.

The following should be taken into account when working with these actions to support multiple site and multi-session controlled routing.

<detach> may result in error.interaction.detach

When an interaction is associated to a session, either directly through the creation of a session from a Routing Point, or indirectly by another session calling <associate>, there is a small window of time required to allow this information to be successfully propagated by the user data update. Should <detach> be called prior to this update succeeding, the <detach> call will return the error.interaction.detach event.

By observing this implementation pattern, it will allow the user to correctly build SCXML documents that operate in a multi-session manner and across multiple sites.

After calling <detach> and having confirmation that the interaction is detached, the user should then immediately route the interaction. If the routing fails, to ensure that subsequent interaction related events are provided back to the SCXML session, the interaction should be re-associated with the session if it is desired to provide subsequent processing within the SCXML document.

This can be achieved by calling the <attach> action. To undertake this, it is expected that the user should store the Interaction ID until the SCXML document has completely handled the detach, routing and or error handling and subsequent routing. By detaching an interaction, the session loses the ability to obtain interaction related events that are not related to interaction related actions, therefore the developer should be aware that to ensure the session has all related events for the interaction, it must be associated with the interaction. It is therefore recommended that <detach> is not called too far in advance of the action used to route the call.

When using <queue:submit>, and there is a need to have multiple sessions running, it is not recommended to call <detach> prior to <queue:submit>. For scenarios that are using <queue:submit>, it is recommended that the resource is targeted first with the route attribute of <queue:submit> set to be false. This will allow the resource selection events (queue.submit.done) to be returned back to the current session. Once a resource has been located successfully you may then proceed to <detach> the interaction from the session and <redirect> the interaction to the selected resource as indicated in the queue.submit.done event.