Facebook BP - Simplified is a sample Business Process that is supplied on the Genesys Social Messaging Management product CD.

The simplified Facebook business process is designed to process the submitted Facebook interactions in the most simplistic way.

The Business Process, Facebook BP – Simplified, has a known issue that prevents users from sending Facebook private messages. The following workaround can be applied to overcome this issue:

You can refer to the following images to know the changes that this workaround applies to the strategy:

Before applying the workaround 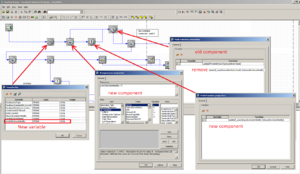