Also known as RAA. An optional Genesys Info Mart process that creates and populates predefined aggregation tables and views within an Info Mart database. RAA aggregation tables and views provide the metrics that summarize contact center activity to facilitate reporting, and serves as the primary source of data for the Genesys CX Insights (GCXI) historical reports. RAA is required for Genesys CX Insights, and was required for the now-deprecated GI2.

What is an Aggregation Hierarchy? 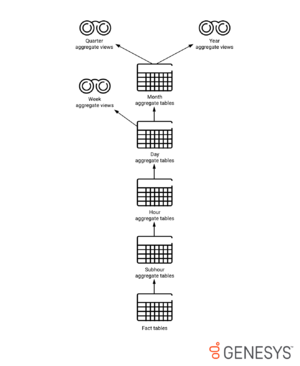 The hierarchies that are present in the aggregation layer are based on time—ranging from subhour table or view constructs to year views of contact center data.

Factual data (for example, from the MEDIATION_SEGMENT_FACT table) is gathered and grouped by a specific time interval (as well as by other dimensions) and then written to a time-based aggregate table or made available via aggregate views that are based on these FACT tables and lower-level aggregation tables.

This page explains the hierarchies of Reporting and Analytics Aggregates (RAA):

The definition of subhour is configurable using the sub-hour-interval Genesys Info Mart configuration option at either 15 minutes or 30 minutes. Each level derives its data by aggregating values from the preceding node in the hierarchy, as shown in the Figure The Aggregation Hierarchy.

The fact tables at the bottom of the Figure The Aggregation Hierarchy store the individual interaction-, session-, or state-related details. Fact tables are populated and maintained outside of RAA by Job_LoadGIM, Job_MaintainGIM, and other Genesys Info Mart jobs. The RAA Physical Data Model Documentation for your RDBMS describes the fact table(s) that serve as the source for a particular hierarchy from whence data is aggregated, and the relevant Genesys Info Mart Physical Data Model Documentation describes these fact tables in detail. 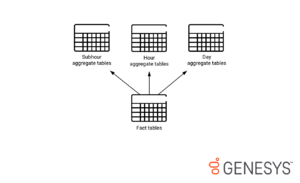 Hierarchies of the Aggregation Layer

How Hierarchies Are Used Within RAA

The aggregation process references several select-*.ss files that are located inside the Java aggregation archive (lib/meta-8.x.x.jar). These files were written using the Scheme programming language. Each Scheme file identifies the hierarchy to which the file applies, along with instructions (that is, code) for generating that hierarchy’s measures. The aggregation process follows these instructions to populate all of the tables that belong to the hierarchy. For information about editing the Scheme files, see How Do I Customize Queries and Hierarchies?.

Hierarchies are also referenced within the user-data mapping file, user-data-map.ss, which you prepare to extend the dimensions by which aggregated data can be partitioned. Refer to How Do I Configure User Data for Aggregation? for information about its use.

RAA also manages a number of parallel hierarchies exclusively for migration purposes. These migration hierarchies are temporary in nature and are not further described in RAA documentation.

What is Aggregation and How Do I Enable It?How do I manage the aggregation process?
This page was last edited on November 13, 2020, at 23:29.
blog comments powered by Disqus