Other guides
8.5.1
Jump to: navigation, search

This document discusses how iWD captures work from an enterprise’s source systems. It introduces the concept of the capture adapter (or capture point), which iWD uses to generalize integration with source systems in a coherent, repeatable way in order to reduce IT costs and project timelines. It describes the iWD message set and the iWD task data model. It then presents information about the four types of iWD capture points available, with enough detail to help IT architects understand how to assess which capture point is the best fit for each source system and how to accomplish integration.

This video introduces integrated capture points from an eServices perspective:

What is an iWD Capture Point?

An iWD capture point, also referred to as a capture adapter, provides a standardized way for the many source systems in an enterprise to communicate with the iWD solution. The communication will take different forms depending on the specific capture point used, but the operations performed by each capture point will be similar. These operations include:

Four types of iWD capture points are described in this document:

Important
In release 9.0, the iWD Web component has special in-built capture point functionality that enables it to handle automatic upload to iWD of spreadsheet files that contain tasks generated by external source systems. To read more about this functionality see the Deployment Guide.

This diagram shows the four different iWD capture points and how they relate to the source systems. The specific features of each capture adapter, the message format, and other details are provided later in this document. 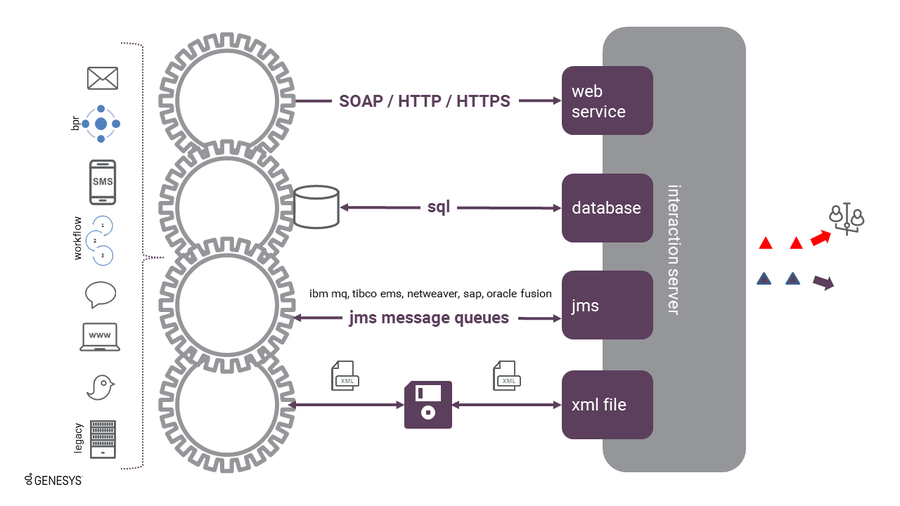 To keep things simple, this document uses the generic term task attributes to describe the data elements of an iWD task that can be set, updated, or queried, through a capture point. In fact, the iWD task attributes are a subset of all the Interaction Server interaction properties that can be accessed and manipulated. These nuances are well covered in the Genesys product documentation and can be studied prior to embarking on the design of any source system-iWD integration project.

Capture Point Messages
This page was last edited on November 21, 2019, at 16:20.
blog comments powered by Disqus