Other guides
8.1.5
Jump to: navigation, search


Specifies the maximum number of keep-in-memory interactions that were placed in queues or interaction workbins (in units of one thousand).

Warning: An incorrect value for this option can affect ICON performance, or cause ICON to stop processing interactions. Keep the default value unless you are advised otherwise by Genesys Customer Care.

Important: The Application-level om-memory-optimization option must be set to true for the om-memory-clean option to work.

Regardless of the value of this option, the removal of an interaction from ICON memory can be triggered by the value set for the Application-level om-max-in-memory option.


Specifies the maximum number of keep-in-memory interactions that were placed in queues or interaction workbins (in units of one thousand).

Warning: An incorrect value for this option can affect ICON performance, or cause ICON to stop processing interactions. Keep the default value unless you are advised otherwise by Genesys Customer Care.


Specifies whether memory usage is optimized.

Note: The values true and false are also valid.

Genesys eServices (formerly known as Multimedia) refers to those parts of the Genesys Customer Interaction Management (CIM) platform that work together to manage interactions that involve nontraditional, non-voice media (for example, e-mail and chat) and open (custom-designed) media (for example, fax and web forms).

For information about ICON configuration and other Configuration Layer settings that make data about multimedia interactions available in Interaction Database (IDB), see the Configuring for Multimedia Data in the Interaction Concentrator Deployment Guide.

Important
This chapter does not cover Session Initiation Protocol (SIP) chat. For ICON processing, the important distinction is the source of the data, not the media type. The source of eServices and 3rd Party Media data is Interaction Server. The source of SIP chat data is SIP Server.

This section introduces the terminology and elements (objects) that pertain to Interaction Concentrator data about multimedia activities. This section contains information about the following:

ICON stores configuration-related information about DN configuration objects in the GC_ENDPOINT table and about the association between DNs and places in the GCX_ENDPOINT_PLACE table.

For information about the way in which ICON handles attached data for multimedia interactions, see Attached Data Processing for Multimedia.

For detailed information about the tables in IDB in which ICON stores multimedia data, see the Interaction Concentrator Physical Data Model document for your particular RDBMS.

ICON connects to Interaction Server, and it receives notifications, in the form of Multimedia Reporting Protocol events, about multimedia interaction processing.

ICON stores the details about eServices and 3rd Party Media interactions in the same tables in IDB in which it stores voice records.

ICON stores the details about agents that are involved in multimedia interaction activity in the same tables in IDB in which it stores voice records. For information about the tables, see Agent State and Login Session Tables.

ICON can handle millions of active multimedia interactions over a sustained period of time without failing because of insufficient memory.

To make this possible, ICON does the following:

When ICON receives an EventPlacedInQueue and/or EventPlacedInWorkbin reporting event from Interaction Server, it considers this the signal to remove the corresponding multimedia interaction from memory, provided that certain user-defined options have been set:

For more information about these and other options, see the Interaction Concentrator Options Reference.

When ICON receives an EventTakenFromQueue and/or EventTakenFromWorkbin reporting event from Interaction Server, it considers this the signal to reconstruct the corresponding multimedia interaction if the interaction was previously removed from memory.

To reconstruct the interaction, ICON restores the following key data:

Once the interaction is reconstructed, ICON processes it as a regular multimedia interaction. See Populating Multimedia Interaction Data. 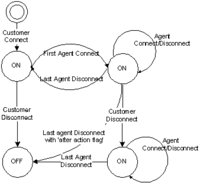 Chat Session Attributes that Indicate Who Ended the Session

ICON release 8.1.507.06 and higher, with the gud role set, can store data provided by Chat Server in the EventPropertiesChanged or EventProcessingStopped event that identifies which party ended a chat interaction. A chat session ends when a party closes their chat window or the agent ends the chat interaction by clicking the End Chat button. In conference chat scenarios, one agent clicking End Chat does not end the session as long as another agent remains on the chat session with the customer.

ICON stores the following two attributes that enable you to report on who ended the chat session and when:

By default, once ICON receives either or both of these attributes, it writes records into the G_USERDATA_HISTORY table using the key(s) ChatServerSessionClientLeftAt and ChatServerSessionClosedAt, with the values taken from the event (UTC datetime string). Only one value for each key is written per chat interaction; by default, this is the first value.