This integration is available only for existing Dialog Engine customers. Contact your account manager if you want to integrate Intelligent Automation with Dialog Engine.

To integrate with Genesys Dialog Engine, complete the following steps:

Once you have configured the Default Server Settings, open a Natural Language Menu module and click the NLU Settings tab.

Intelligent Automation reads all Intents, Utterances, and Slots associated with a domain and then displays that information on the Intents List page for the Natural Language Menu module. This is where you'll map each Intent to a module.

Important
If the fulfillment is being performed by the bot, you can select None from the Intelligent Automation Module to Trigger menu and a generic “success” result will be returned after the intent has been completed.

For each Intent, you should have an associated module containing questions that will extract the right information from the customer. For the Weather example, you would have a Weather Questions module, which contains two questions: For what city and For what date? Both of these questions relate to the weatherLocation and weatherDate Slots.

Once you have created this module in Intelligent Automation, you need to map it to its associated Slots, as follows: 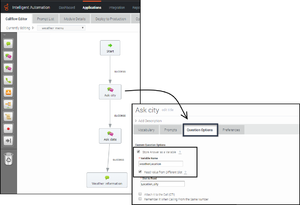 The Enable Maximum Attempts Counters setting allows configuring the number of retry attempts and the action to be performed when the limit is reached.

The Enforce Maximum Attempts for filling Mandatory Slot will enable or disable the slot fill failure timeout feature. The number of unsuccessful tries can be configured after which the call is either transferred to a different module or return a result.

For example, if the number of retries is specified as 2, the bot will look if it can fill up any slots based on the user input two times. If the slot is not filled after both attempts, the call flow will be transferred to either a different module or return a special value.

When a value is provided in the Maximum Attempts to Fill Mandatory Slot Values option, the bot will try to slot-fill the user input. If the bot cannot perform a slot-fill successfully, the counter is increased. When the counter value exceeds the maximum retry values, Intelligent Automation either transfers the callflow to a different module (configured in the Exit Module field) or return a special result.

Important
When a slot is filled successfully or if the intent is switched, the counter is reset to zero.

When the Enforce Maximum Attempts for Intent Disambiguation option is configured, the bot will try to identify an intent from the conversation. When the maximum number of unsuccessful attempts is reached, Intelligent Automation either transfers the callflow to a different module (configured in the Exit Module field) or return a special result.