You can control access to information in the Genesys Contact Center Advisor/Workforce Advisor (CCAdv/WA) dashboards and on the CCAdv/WA administration page using roles, and associating permissions and privileges with each role. Controlling information using roles, and associated privileges and permissions, is called Role-Based Access Control (RBAC).

Performance Management Advisors support role-based access control (RBAC). You can use RBAC to control which users can access specific components—for example, use Genesys' RBAC to configure access to the Administration module for a specific subset of managers.

Advisors use Configuration Manager business attributes, which means Advisors can take advantage of Genesys roles for controlling access at a detailed level to Advisors' business objects and metrics.

RBAC is enforced primarily by visibility in the interface. What a user sees is determined by the roles which have been assigned. If the user is not assigned a role that grants them access to a piece of functionality, that functionality is not displayed to the user.

Tip
In Advisors release 8.1.1, three special access groups were introduced to represent the three different types of users in Advisors (Super Administrator, Partition Administrator and Dashboard User). Starting in release 8.1.2, these access groups are no longer required. Unless they are used to actively manage object permissions, they can be removed from the Configuration Manager.

The major component of RBAC is a role. Roles define what facilities are provided to users to review and manipulate various types of data. These include which property controls are available for items permitted by object permissions, what modules are visible, and access control for entities not represented by configuration objects. A role is assigned to a user, and that user is then able to do only what that role permits. One user can be assigned multiple roles, and one role can be assigned to multiple users. A role may also be assigned to an access group, and users in that access group are then able to do what the role permits.

Different roles can have different access and allowed functionality for the same objects. In essence, roles resolve both problems associated with using only permissions – users can access and work with only those parts of the object to which they are allowed.

Roles can also be used to protect access to entities that are not configured as configuration objects, such as logs. In general, when determining the accessibility to an object by a user, the user session cannot retrieve objects if they are not among those objects to which the user has access (as defined by object-access permissions). For data that is available in the session, role privileges refine what can be done with the data.

Roles can be assigned to either users or access groups. This assignment is done on the Members tab of the role.

Important
To inherit permissions, access groups and users must belong to the tenant specified in the Advisors Platform installer. 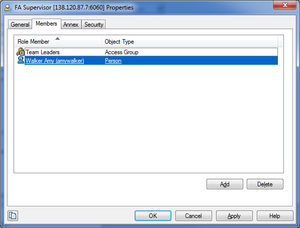 In the screenshot to the right, the role FA Supervisor has been assigned to:

Once a role is assigned to an access group, all users in the access group are assigned that role. The access groups and/or users must have Read access to the role in the Security tab to be able to access the role.

Important
Names of access groups must not contain spaces.

By default, new users are not assigned any default roles. They must be assigned roles by a System Administrator or by an existing user with appropriate privileges.

Seven default roles are created by the utility in the Configuration Manager, with each one representing access to a particular module. Each role has a limited set of privileges associated with it. The default roles are:

You can change the preceding role names post-migration.

Additional sources of information on role-based access, privileges and permissions are:

Roles consist of a set of role privileges (Read, Change, Execute, and so on). Privileges determine what tasks or functions a user can execute on objects to which he or she has access. Role privileges are defined in Genesys Configuration Manager.

By default, role privileges are not assigned to any role, so you must explicitly assign privileges to roles. Role privileges range from general to very specific tasks. An authorized user, normally a System Administrator, bundles these tasks into roles. These roles are then assigned to users. As a result, each user can perform only those tasks for which they have privileges.

Functionality permissions, or privileges, determine what tasks or functions a user can execute on objects to which he or she has access. Privileges for each role are stored as key-value pairs in the Annex tab of that role in Genesys Configuration Manager. If a privilege is present in a role, then any users assigned that role have access to the functionality controlled by that privilege. The value for the privilege key can be anything, or can be left blank.

Typically, you configure RBAC in Configuration Manager in the following order:

Add users to a role on the Members tab of the properties dialog box for that role. Add users with one of the following methods:

Assign permissions for a role on the Security tab of the properties dialog box for that role. A user must have Read access to the role (either directly or through an Access Group) to which he is assigned. 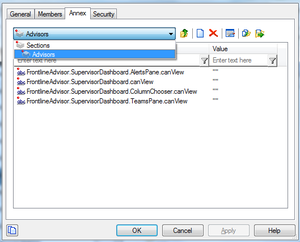 The privileges for Advisors are bundled under a single section in the Annex tab with the title Advisors. Each privilege name uses the following general structure:

Important
Ensure you copy the exact privilege with no leading or trailing spaces. Some privileges work as single entries; some require a group of privileges to ensure full access as you expect. In the preceding example, all three privileges shown in the screenshot above are required so the user can view the Agent Alerts pane. See the list of privileges in the Privileges tab on this page for more information.

Roles, and the privileges associated with roles, are cumulative. A single user or access group can be assigned multiple roles. In such cases, the user will have the combined set of privileges granted by each role. In other words, the user is granted any privilege that is granted by at least one of the assigned roles. This ensures that the user is able to perform the tasks of all roles in which they participate.

Each user can also belong to multiple access groups, with different permissions coming from each group. In such scenarios, the user’s permissions are a union of the permissions of all the access groups to which he or she belongs, unless access is specifically denied for one group, which takes precedence (see the following scenarios).

Advisors follow the principle of least privilege. The following scenarios show how this union should work:

The following Tables list all Contact Center Advisor/Workforce Advisor privileges available in Configuration Manager. The Tables include a description of the consequence to the user if the privilege is present or absent.

Advisors Business ObjectsObjects in the Administration Module
This page was last edited on May 19, 2014, at 15:45.
blog comments powered by Disqus