Other guides
8.5.1
Jump to: navigation, search 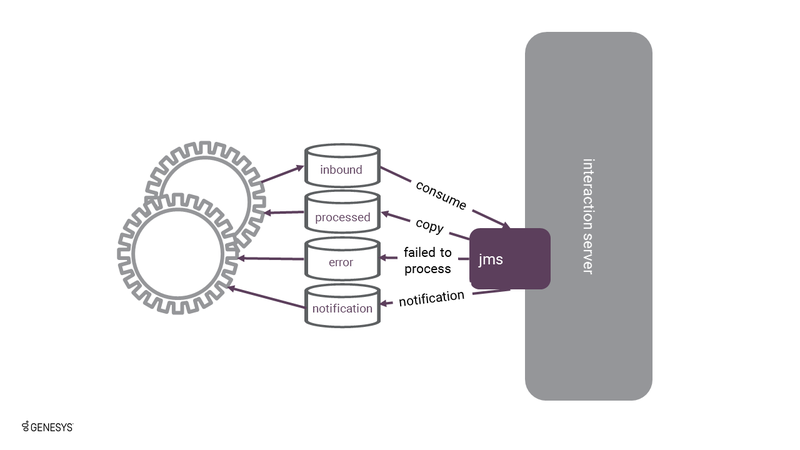 The source system is responsible for generating the XML messages and putting them in the inbound queue on the JMS provider. The JMS Capture Point is an excellent choice for all source systems that can support it, either directly or through some middleware such as WebSphere MQ Server or TIBCO Enterprise Messaging Server. Because it is an enterprise-class message bus, these providers that implement the JMS specification are able to leverage the persistence of the message queues. This means that if there is some service interruption on either JMS client (that is, the source system or iWD), any messages that have not yet been consumed will remain in the JMS queues to be retrieved when the JMS client is brought back into service. The JMS specification caters for this by using a correlation ID to map the outgoing request message with its corresponding reply.

The JMS Capture Point can also be configured to support SSL between the Genesys Interaction Server and the JMS provider.

The JMS Capture Point supports optional message transformation. This is provided via the Groovy scripting language. That is, Groovy scripts may be written that describe to iWD how the source system’s native XML message format should be converted into a message format that can be understood by iWD, and vice-versa for message replies and notifications coming from iWD back to the source system. For customers who want to use the message transformation feature, Interaction Server must load a JVM, which requires that the Java JDK (latest release of 5 or 6) be installed on the Interaction Server-accessible host.the

Here is an example of a simple request using the iWD JMS Capture Point, which instructs iWD to create a new task.

Here is an example of a simple JMS Capture Point message flow. 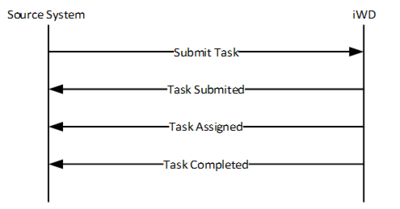 There is more detailed technical reference information in the JMS Capture Point section of the eServices Integrated Capture Point Guide.