Enables you to align reporting of agent states more correctly in multimedia deployments with Interaction Server Cluster where:

However, be aware that state durations might still be affected if time is not synchronized among the Interaction Servers in the cluster—for example, a state’s duration might be reported as one second less than actual.

The architectural choice for your contact center depends on your resources and reporting requirements. In fact, you can tailor the basic scenarios described in this section so that they fit the needs of your contact center at the lowest cost. For example, you can deploy a single instance of ICON for a subset of T-Servers (as opposed to one instance of ICON for each instance of T-Server). Alternatively, you can keep data for a certain site in a separate IDB, if it is not necessary to include data from this site in a consolidated report.

Do you need separate IDBs for voice and multimedia data?

The downstream reporting application might affect your choice of deployment architecture.

Important
Interaction Concentrator does not support deployments in which two ICON instances are configured for the same role, connect to the same T-Server or set of T-Servers, and write data to the same IDB. For more information about the ICON roles and the rules governing role assignments, see ICON Roles.

To simplify the deployment diagrams in this section, please note the following conventions:

The ICON server interfaces with: 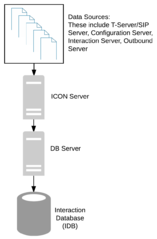 The figure above depicts the basic ICON architecture, omitting most of the Framework components for the sake of simplicity.

In a single-site contact center, the following approaches to Interaction Concentrator deployment are typical:

One ICON and One IDB 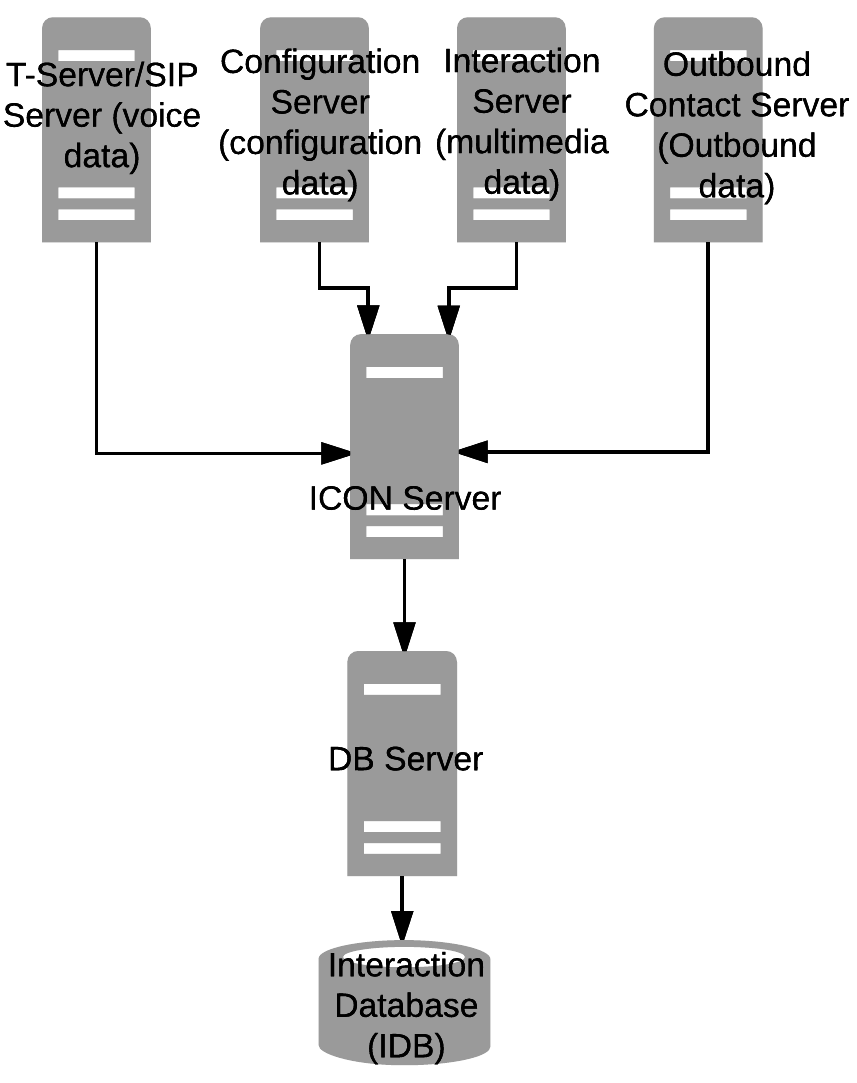 One ICON and One IDB

The figure above illustrates the deployment for voice interactions. This type of deployment is also suitable for multimedia environments, in which case the Interaction Server occupies the same position in the architecture as T-Server.

In a multi-site contact center, approaches to Interaction Concentrator deployment vary, depending on network delays between sites, the need for across-the-sites reporting, and other considerations. The following is the basic list of deployments to consider:

One ICON and One IDB per Site

Although the data for a particular site is readily available, this deployment does not provide across-the-sites reporting data for the entire contact center. Merging of data between IDBs is the responsibility of the downstream reporting application. Reporting of multi-site calls is also limited by the visibility of those calls at a particular site.

In a multi-site deployment with a single ICON instance and a single, centralized IDB instance, call details from all contact center sites come into the same database through the same ICON.

Multi-Site Deployment: A Single ICON and a Centralized IDB Instance

This scenario helps you avoid the need to merge data from different databases. However, note the following considerations:

In a multi-site deployment with a separate ICON instance at each site and a single, centralized IDB instance, interaction details from all contact center sites come into the same database through separate ICONs.

Multi-Site Deployment: Multiple ICONs and a Centralized IDB Instance
Warning
This functionality is not supported for eServices (email and chat) or 3rd Party Media. Although Interaction Concentrator supports this deployment scenario, Genesys Info Mart does not. Genesys Info Mart requires that each instance of ICON must store data only in an instance of IDB not connected to any other ICON instance.

Like the scenario of one ICON and one IDB for the contact center (see Multi-Site Deployment: A Single ICON and a Centralized IDB Instance), this deployment provides the benefit of recording all contact center data in the same database.

However, this scenario provides the additional benefit of improved ICON performance, because a single ICON instance does not require a connection to every T-Server in the contact center. In addition, because T-Server and ICON instances are co-located at a particular site, network delays between these components are minimal.

Nevertheless, the effectiveness of data storage to IDB still depends on network delays between a given ICON instance and IDB, as well as on the performance of your RDBMS. Also, if you are running Genesys Info Mart 7.6 or earlier, or running Interaction Concentrator without Genesys Info Mart, to ensure data correctness for multi-site calls, you must regularly run the Interaction Concentrator intra-IDB merge stored procedure (see The Merge Stored Procedure).

One Network T-Server per Network Switch 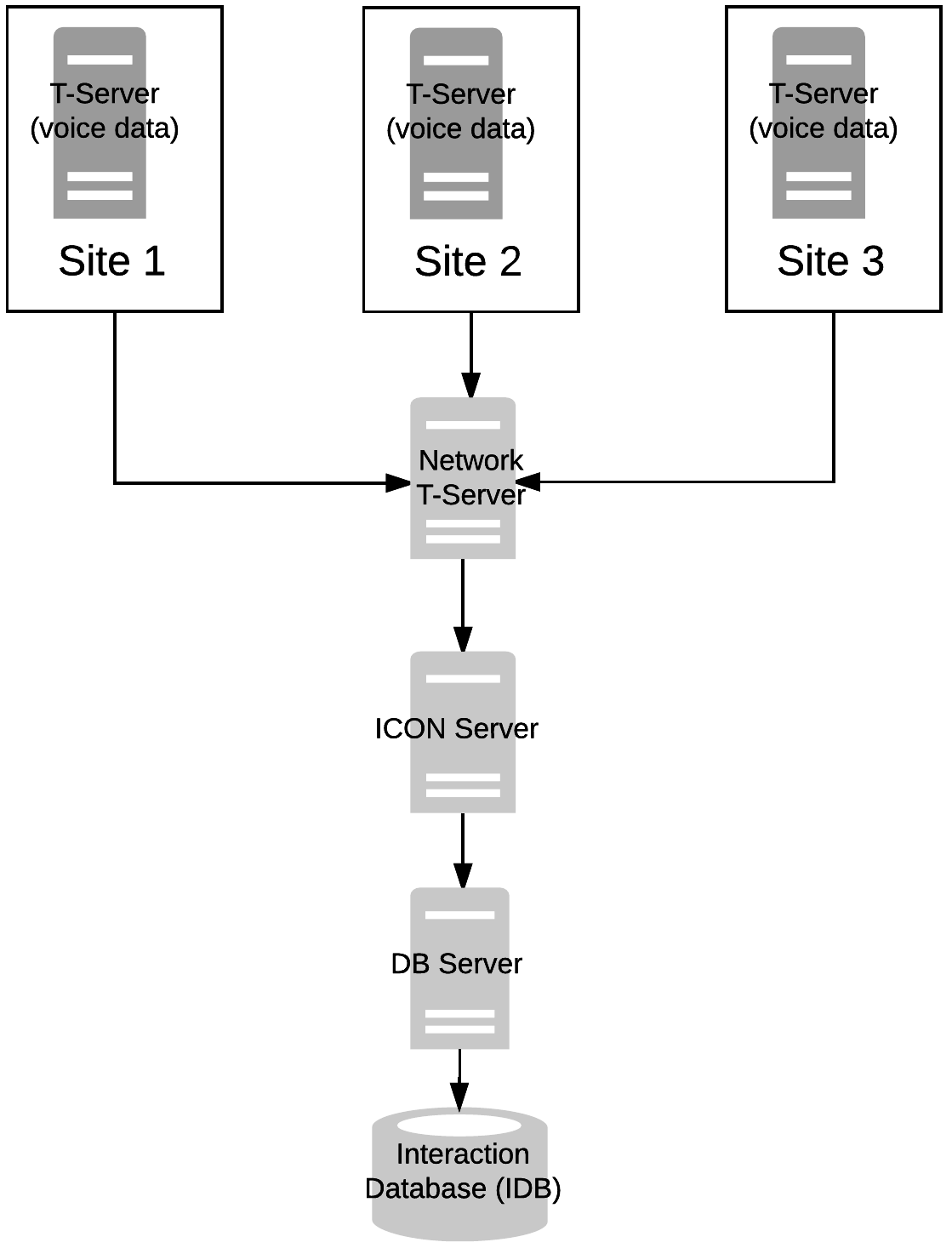 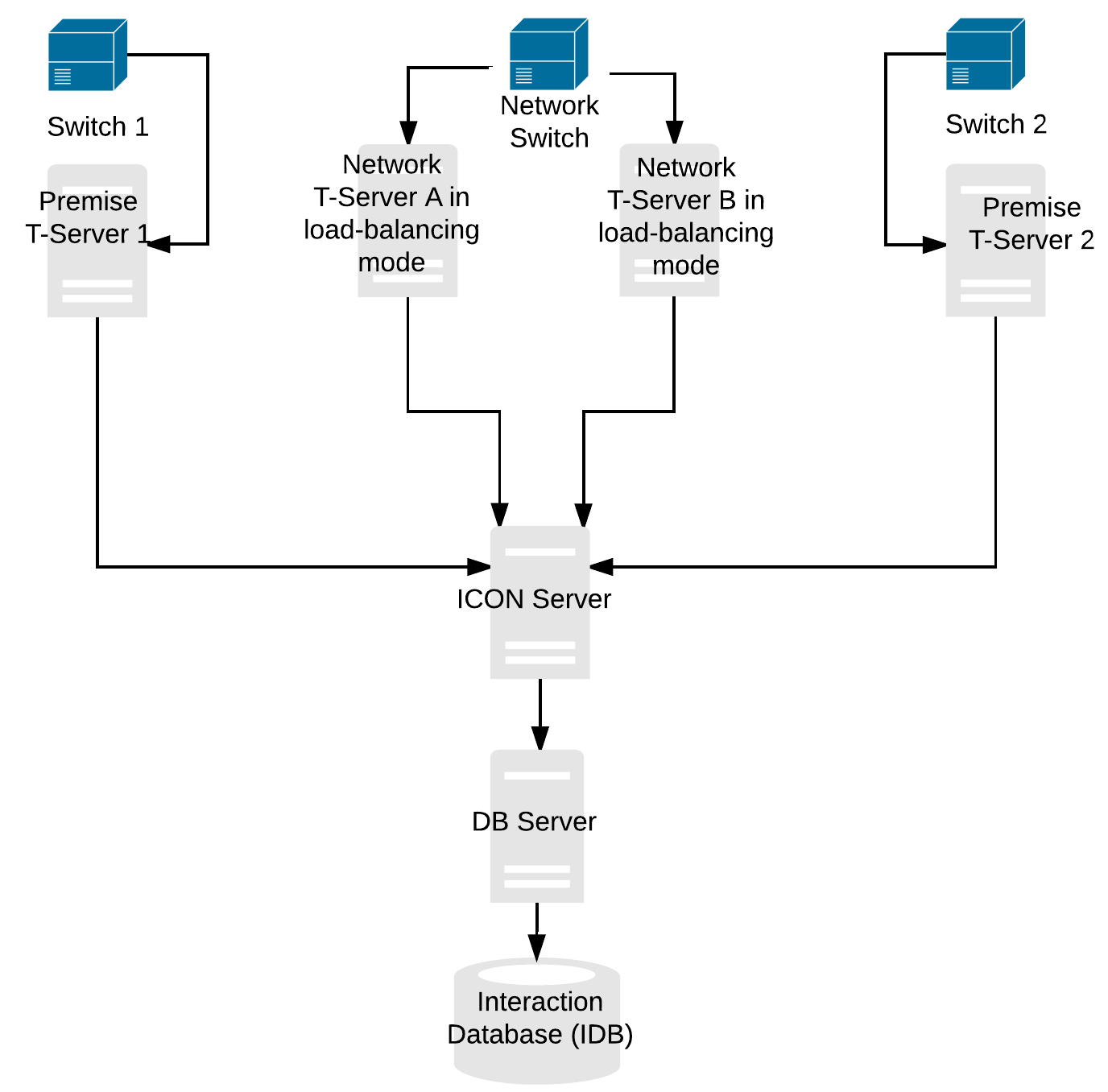 In such a deployment, the ICON instance creates and maintains a separate connection for each IVR T-Server. ICON monitors interaction activity on the switch through the notifications it receives from each IVR T-Server.

This functionality also works when you are using the T-Server application type to connect to Interaction Server (necessary in all releases of ICON prior to 8.1.502.04).

ICON processes data only from the Interaction Servers associated with tenants included in ICON's Tenants list.

Important
To use an Interaction Server associated with more than one tenant, connect to Interaction Server indirectly via T-Server Application objects, as described in Special Connection Procedure for Releases 8.1.500.04 and Earlier, on the Multimedia tab of the Special Configuration Requirements page.

Each tenant assigned to an Interaction Server should have only one multimedia switch. Although ICON can complete the connection to Interaction Server if it finds multiple switches of the “Multimedia switch” type assigned to a tenant, this architecture is not considered to be supported and data results might be inconsistent. In this scenario, ICON generates a standard error message (20010 Configuration error. Class [errclass] : [errtxt].), chooses the oldest created Switch (the one with the smallest DBID), and proceeds to connect to the Interaction Server(s) associated with that tenant.

If ICON finds that the tenant of an Interaction Server does not have a multimedia type switch, ICON generates a standard-level error message (20010 Configuration error. Class [errclass] : [errtxt].) and does not connect to that Interaction Server.

ICON supports tracking dynamic changes to Interaction Server properties and connections in the same way as it does for T-Server.

ICON will connect to new Interaction Server applications after they are added to ICON.

The Interaction Concentrator Components and What They DoICON Roles
This page was last edited on September 17, 2021, at 18:29.
blog comments powered by Disqus