How can you improve reliability and achieve better bandwidth and latency control for your network. During the network design phase, apply at least some of the considerations in this section.

Deployment of SIP Server HA begins with technical planning of SIP Server HA implementation. As a start, the owner of the business requirements collaborates with Network Administrators and Network Engineers that support corporate network infrastructure.

Consider the following major points during design of a network for any system, including one that will offer SIP Server High Availability:

A well-designed network should be scalable. The chosen topology should be able to accommodate projected growth. A modular approach to design converts a complex system into smaller, manageable ones, simplifies implementation and ensures that it can easily isolate a failure.

In addition to the general considerations above, the unique characteristics of SIP Server HA are essential to the network design.

SIP Server High Availability depends on reliable network connectivity between SIP Servers. SIP Server's support of Hot Standby HA is critical to call processing. Using the TCP connection between SIP Servers, Genesys processes support the synchronization of critical data from the primary to the backup. This allows the backup to resume processing with little or no loss of calls.

Your ideal network design will recover interrupted connectivity within 2-4 seconds. Longer connectivity disruption can lead to HA synchronization issues that are recoverable, but take minutes to do so.

SIP Server High Availability depends on reliable network connectivity between Solution Control Server and SIP Servers. As the control tool of Management Framework, SCS monitors components and assigns Primary and Backup roles across respective components—based on the availability of components.

Clients of Hot Standby SIP Servers establish parallel connections to both the primary and backup, which enables a seamless switchover when a Primary fails.

Your network design must ensure that the failure of a single network element triggers a redundant path between SCS and SIP Server becoming available with within 2-4 seconds—that's End-to-End convergence time. Longer convergence time can lead to a split-brain condition that disrupts functionality of the entire environment.

VIP address is a configurable option of the SIP Server application in the configuration.

In an environment where multiple redundant routers deliver SIP messages to SIP Server, the scripts must be configured to refresh ARP tables on all such adjacent routers.

Network design must ensure that the network of VIP (VLAN) is extremely reliable.

A Layer 2 disconnect on this network can make SIP Server VIP inaccessible, sporadically or worse, to SIP devices communicating with the VIP. A VIP network split can detach one of the adjacent routers from the rest of the VLAN, making it unable to deliver to the VIP packets that arrive from various SIP devices.

Dedicated Network Infrastructure for Voice over IP and SIP Communications

Set up a dedicated network infrastructure for specific protocol communications. The network design may need to require partitioning SIP/RTP traffic and management traffic (T-Library, and so on) onto different networks. SIP Server HA does not require the use of dual-NIC hosts, but can support their use. 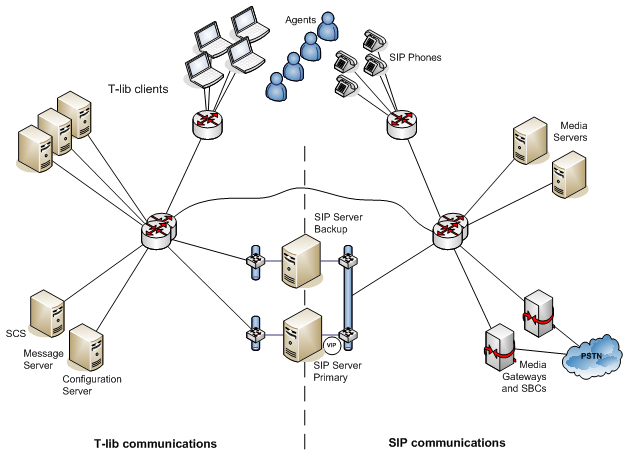 Partitioning is required in a deployment where network equipment does not support Quality of Service, i.e., does not guarantee a certain level of performance such as a required bit rate, delay, jitter, packet dropping probability and/or bit error rate.

For example, network equipment that ignores the Layer 2 Class of Service field does not provide different priorities to the data flows of different applications. Since Quality of Service guarantees are important for real-time streaming applications, and specifically for VoIP, applications must use a dedicated network (VLAN) for SIP/RTP communications, and partitioning is required.

Dedicated Network Infrastructure for Voice over IP Communications requires that the SIP Server host be connected to several different virtual networks (VLANs). A host connected to more than one IP network is said to be multi-homed because it has several IP addresses, on different networks.

A single hostname or Fully Qualified Domain Name (FQDN) and respective IP address is typically dedicated for management purposes for such a host. This hostname and/or respective IP address is specified in the host object in Genesys Configuration. From the perspective of the Management and Configuration Layer, the SIP Server application is running on a host with this hostname.

The illustration Network Partitioning of T-Lib Communications and SIP Communication (above) illustrates a deployment where management of hosts and regular data communications between applications go through one set of networks, while a different and dedicated network infrastructure is set up for VoIP communications.

To use dual NICs, you must also configure the IP parameters associated with the SIP NIC within each host. This configuration includes the IP gateway to use for egress IP routing of SIP traffic. It is required to ensure that outgoing SIP traffic is sent through the correct NIC.

RFC 1122 describes the Strong and Weak host models for a multi-homed host that is not acting as a router. These models define whether sent network traffic must be associated with the network interface. The IPv4 implementation in Linux uses the weak host model.

When you deploy SIP Server on an OS that uses a Weak host model, Genesys recommends configuring on the host a single default route that points to the IP gateway on the regular data network.

Static routes for networks of SIP devices such as SIP endpoints, SIP Proxy, Media Servers, SBCs, and Media Gateways, are configured on a dual-NIC host via the adjacent IP gateway on the dedicated VoIP network.

Identify each network of SIP devices to be reachable through the gateway on the VoIP network and configure its static route.

Deploying on Windows Server 2008 and later

You do not need to configure static routes for networks of SIP devices, because the OS itself will use the SIP NIC default routing based on the source address of the SIP packet set by the SIP Server as its VIP address.

From the network perspective, symmetric routing means that packets traversing a NIC in either direction are sourced from--or destined to—an IP address of the NIC.

As described above, the Strong host model implemented in Windows Server 2008 and later allows one routing table per NIC. A correct configuration of NIC-level routing tables on Windows 2008 host will ensure symmetric communications, because SIP Server originates some data connections to other systems; routes to those destinations are thus relatively easy to configure via the correct NIC and the adjacent IP gateway on the regular data network.

In an environment where a remote host communicates with SIP Server using both SIP protocol and T-Library protocol, it is impossible to properly segregate SIP and T-Library traffic at the SIP Server host with a Linux operating system. Asymmetry of routing occurs because the Weak host model sends packets to the network according to its routing table of the host, and it will send packets through a NIC regardless of the originating IP or the protocol of communications.

An example of such a remote system is an agent’s computer that provides both desktop and SIP Phone functionality. Genesys recommends that in this environment, you use dedicated Voice over IP network only for delivery of SIP messages from such systems to the SIP Server VIP, while the routing table on the SIP Server host directs SIP packets from the SIP Server via the over NIC to the adjacent IP router on the regular data network.