The Add Condition and Add Action drop-down lists are populated with all of the conditions and actions that were created in the rule templates that are included in the rule package. The drop-down lists contain the language expressions that the rule developers used during creation of the components, and not the rule language mapping. This makes it possible to create rules without knowing the rule language mapping or being familiar with Drools.

The parameters that are contained in each condition and action are represented by the names that are entered for them. The business rule author must replace this name either by entering a value (such as for an age range) or by selecting an option from the drop-down list (such as for an Agent Group).

WHEN a customer’s age is within the range of 30-40 years, THEN the customer’s interaction will be routed to Agent Group 1. In GRAT, create a new linear rule. Enter the name, phase, and so on, as desired, and then add a condition and an action. The phases from which the rules author can select are dictated by the rule template that the rules author is using.

There is an enumeration called Phases within the _GRS_Environment fact, that will be created whenever a new rules template project is created in the GRDT. If the Phases enumeration is not present, the rules author will simply see * in the Phase dropdown. In this case, Phase will not be considered when evaluating the rule package.

To create this rule, the rules author would select Age Range as the condition and enter 30 as the {ageLow} parameter and 40 as the {ageHigh} parameter. The action would be Target Agent Group, and Agent Group 1 would be selected from the {agentGroup} drop-down list. The figure below shows the linear rule in the Genesys Rules Authoring Tool.

Example 2—Route from Voice to E-mail

This example is typical of a Conversation Manager scenario. WHEN a customer calls in (media type=voice) and they are a Gold segment customer whose phone number starts with 919, THEN offer a survey to the customer and send it by email. 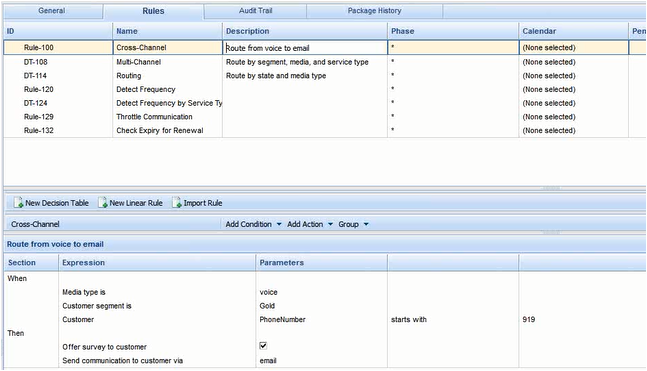 Creating a Linear RuleCreating a Decision Table
This page was last edited on March 28, 2019, at 13:02.
Comments or questions about this documentation? Contact us for support!