Prompts can be found in Menu, Message, or Phone blocks. You can play prompts using either TTS (Text To Speech) or prerecorded audio files.

Prompts always give precedence to uploaded audio files over TTS text. However, GAAP retains the TTS text so you can easily switch back and forth between TTS and prerecorded audio, without having to retype the TTS or reupload the sound file.

Tip
If you use prerecorded audio files, Genesys recommends that you also enter equivalent TTS text so system users can easily read the prompts and quickly identify issues when troubleshooting.

Variables and playback of dynamic data

You can add variables to your prompts using square-bracket notation. Variables are containers for storing data, and they are replaced with real data when the application executes. For example, consider the following prompt: "Your current balance is [currency:PaymentBalance]." When the application executes, the variable [currency:PaymentBalance] is replaced with the caller's payment balance value.

GAAP uses variable data in several locations. Prebuilt modules can use them, such as in the payment balance example above, or they can be returned by web services, or set manually in Script blocks.

Every variable has a name and a formatter. The formatter indicates which sort of value the variable represents (for example: a digit, a date, or a currency).

GAAP sources variable data from several locations. Some prebuilt modules create variable data automatically, whereas others are returned by web services and can be set manually in Script blocks.

The following variable formatters are available:

You can upload a set of audio files (in a single ZIP file) that play back dynamic information such as digit strings, currency amounts, dates, and more. These prompts are shared across a company's applications. The server attempts to use these recordings for prompts, falling back to TTS if necessary.

See the Dynamic Prompt Uploads section on the Personas page for more information.

You can view a list of standard prompts in the Prompt List tab, under the Other Prompts section. GAAP uses these default apology and confirmation prompts throughout your application. You can update these prompts as required by your business needs.

You can define the following standard prompts in your application and also have these prompts used in a sub-module.

If using en-gb or fr-fr and the VoiceXML.SSML.AlwaysUseSSML server setting is false, then Speech Synthesis Markup Language will not be used.

To customize SSML output for different TTS engines, the VoiceXML.SSML.RulesTypeOverride server setting can be used. Depending on the TTS engine and language in use, GIA will attempt to pick the most specific vxml file for each playback type on the folder specified in the VoiceXML.SSML.RulesTypeOverride server setting. For example, GoogleSS, NuanceVocalizer5. If no TTS engine is specified, the Default value is used.

When VoiceXML.SSML.AlwaysUseSSML is enabled, the interpret option is used for generating the SSML.

The VoiceXML.SSML.Play.DynamicSSML server setting controls the Dynamic SSML playback from NLU engines like Dialogflow. This setting has a default value of false for backward compatibility. When set to false, MCP interprets the SSML tags as string values and when this setting is true, the SSML tags are interpreted as SSML tags and played.

If you are using Google TTS and playing SSML from a variable, ensure that there are no extra [" tags present in the variable content or between SSML tags.

Click Find/Replace to search for a particular word or term in your prompts.

In the pop-up window: 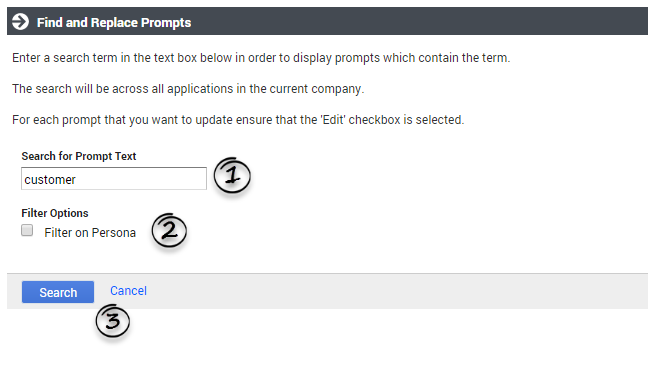 GAAP displays prompts that match your search term. To edit a particular prompt, select its Edit check box. Next, edit the TTS text and upload a new audio file (if necessary). Click Save when done.